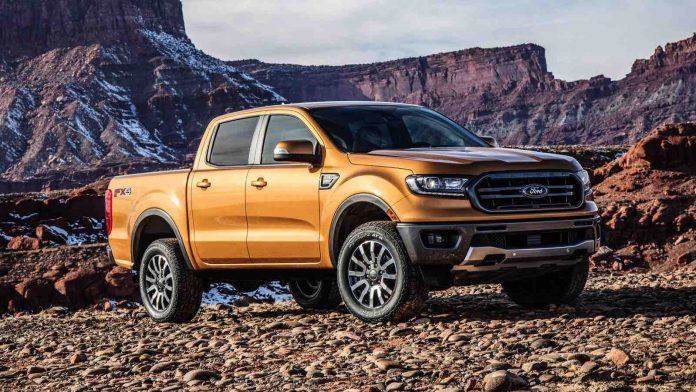 The Ranger is back – and bigger.

Out back, for instance. The new Ranger’s bed is actually smaller – relative to the rest of the Ranger.

Because the cab is bigger.

Have a look at the new Ranger next to my old Nissan Frontier – which is the same size (compact) as the Ranger used to be.

Obviously, there’s more cab – length/width and height. But no more bed – and less bed if you get the most cab.

The new Ranger comes in Supercab and Crew Cab configuration only – both with four doors, the Crew’s being full-sized while the Super’s are smaller. But they’re there, regardless.

Which is why there’s no room left for more bed.

The max you can get is six feet – the same as my ’02 (and much smaller) Frontier. And if you get the Crew, you can’t get more than a five foot bed, which is less bed than my smaller ’02 Frontier.

But – apples and oranges, eh?

The new Ranger can carry more people in much more comfort than my Frontier – and the Ranger can pull more than twice as much behind its bed – 7,500 lbs. vs. 3,000 for Silverbell, my poor little truck!

The new Ranger is also quick – something no one has ever accused my Frontier of being – because it comes standard with about 120 more horsepower than my truck’s got.

Still, I think it’d be nice if Ford – if anyone – offered a regular cab (or even just a two-door extended cab) version of their current mid-sized trucks with an eight-foot bed.

Of course, that’d put too much heat on full-size trucks; lots of people might not buy one, in favor of a much less expensive mid-sized truck.

So that probably explains it… .