The name’s the same – but a lot has changed since Ford last sold a Ranger pick-up in the United States.

For openers, the new Ranger is mid-sized; the old Ranger (last sold in the U.S. in 2011) was a much smaller truck.

Power – and capability have been increased, too. 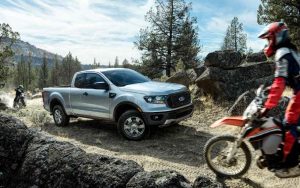 The new Ranger comes standard with a 270 horsepower turbocharged engine – and can pull as much as 7,500 lbs. – which makes it more powerful (and capable) than some full-size trucks used to be as well as all of its current mid-sized rivals are – including some of them equipped with their optional engines (with one asterisk; more follows below).

On the downside, you can’t get it with less than four doors – even if you only want two. And even though it’s much larger than the old Ranger, it doesn’t come with a bigger bed.

As almost always – pros and cons. 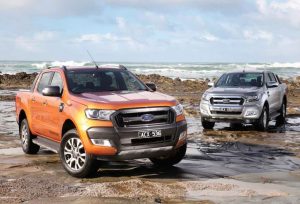 The new Ranger  is a mid-sized truck, similar in general layout to others in this class like the Chevy Colorado (and its GMC twin, the Canyon) the Nissan Frontier and the Toyota Tacoma.

Like them – like all the currently available mid-sized pick-ups – there’s no regular cab/long bed version available, which limits what you can put in the bed.

But because the Ranger has much more engine than its compact-sized forbear, it can pull thousands of pounds more behind its bed.

And because it has more cab, it can also carry more people – and much more comfortably. 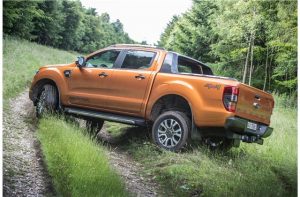 All trims – even the base XL – come standard with the same 270 hp 2.3 liter turbocharged engine and a ten-speed automatic transmission.

This gives the Ford an edge (couldn’t resist) over its rivals, none of which come standard with comparably powerful engines.

However, some of the Ranger’s rivals – including the Colorado/Canyon – cost several thousand less to buy than the Ford. The GM twins are also available with both a stronger gas V6 engine (3.6 liters, 308 hp) and a diesel engine – as well as a manual transmission (with the base 2.5 liter liter engine). 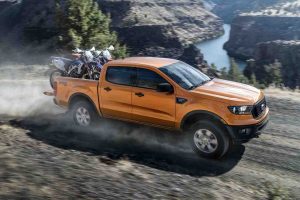 Ford has been selling it everywhere else for several years.

Mid-sized cab is much roomier than previous compact-sized cab.

Bed is much more accessible than current full-size truck beds.

No engine – or transmission – options.

Crew cab comes only with the short (five foot) bed.

Almost as long as full-size trucks once were, but not as functional as a full-sized truck. 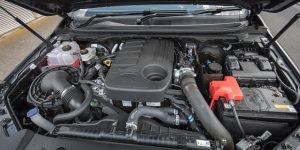 Trucks usually give you a range of drivetrain options to choose from. Ford decided to make it easier for you  to choose by equipping every Ranger with the same drivetrain – leaving you to concentrate on trims and cabs and beds.

First, the specs are different. The Mustang’s version of the 2.3 engine makes 310 horsepower and 350 ft.-lbs. of torque.

Interestingly, the Ranger’s version of the 2.3 liter engine has a slightly a higher compression ratio (10.0:1) than the Mustang’s version (9.5:1), so the Mustang 2.3’s higher rated output must be due to higher boost. 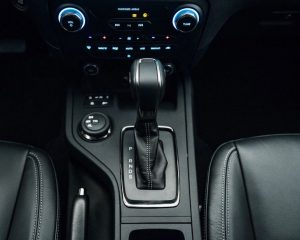 Either way, the Ranger’s engine offers much more of both horsepower and torque than summoned by any of the Ranger’s rivals’ standard engines – none of which benefit from a turbocharged goosing.

It’s also why the Ranger has the mightiest standard tow rating in the class – 7,500 lbs. – which is also more than the others can tow, period – even with their optionally available engines.

The GMC twins can pull slightly more (7,700 lbs.) when ordered with the turbodiesel engine you can get in both of them. That engine makes a mighty 369 ft.-lbs. of torque – close to V8 torque – and the most torque you can get in a mid-sized truck. But Chevy and GMC only sell the diesel in the high-trim versions of the Colorado and Canyon; these cost $10,000 more than the cost of the entry-level XL Ranger . . . before you add the diesel – which adds another several thousand dollars. 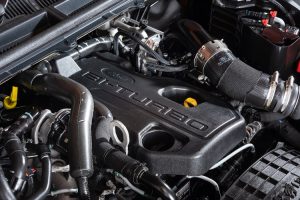 How much is that extra 200 lbs. of tow capacity worth to you?

Regardless of trim, you can go 2WD or 4WD, the latter with a two-speed transfer case and 4WD Low range gearing.

Ground clearance ranges from the base 2WD XL’s 8.4 inches to 8.9 inches for 4WD-equipped models.

The standard 10-speed automatic has three overdrive gears (8th, 9th and 10th) with 10th being a super deep .63 ratio, which enables the truck to cruise at 70 with the engine turning just over 2,000 RPM.

This accounts for the new Ranger’s better-than-the-old Ranger gas mileage – even with 3.73 gears in the pumpkin.

It also didn’t get to 60 in just over six seconds.

The new Ranger does. 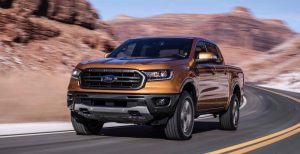 It’s hunky, but not cod-pieced WWF steroidal, as current half-tons have arguably become.

A big man doesn’t feel small. You can touch the bed floor without standing on a milk crate – and get in the bed without a ladder.

And the truck doesn’t feel small if you are a big man. 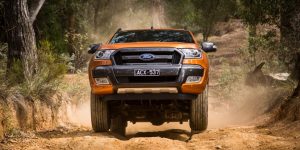 It’s also not too wide – relative to the road – as the current F-150 (and other current half-ton trucks) sometimes feel like they are. The Ranger’s relative svelteness – it’s 85.5 inches at its widest point – is especially valuable in the era of Lane Keep Assist – and steering wheel shake – the “assist” that generally comes with Lane Keep Assist. Which gets triggered like a social justice warrior who just saw a MAGA hat whenever one of the vehicle’s tires touches the double yellow to your left or the white line to your right.

Because there’s too much truck in between.

Instead of a quivering lip and stomping foot, a steering wheel that shakes like you just lost some vital front end component. 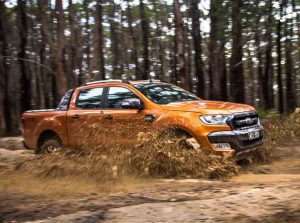 And when your vehicle is so wide that you almost can’t help regularly treading on one of those painted lines, the steering wheel is almost constantly shaking.

Which is annoying – as well as distracting. Especially when you can’t turn the Lane Keep Assist off – which is the case in a number of new vehicles.

It’s not a problem here.

The new Ranger is also like the old Ranger – and older half-ton trucks – in that it is a remarkably mechanical truck. It hasn’t got manual-lock hubs – but it does have a manual pull-up emergency brake on the center console rather than a push-button electric parking brake. This gives you more control when the Ranger is moving – rather  than merely securing it when you’re finished parking. 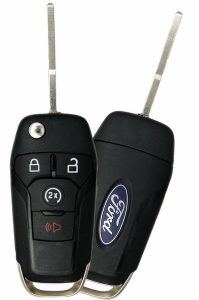 There’s a mechanical (engine/belt-driven) mechanical fan, too. This may cost a few horsepower vs. electric fans, but mechanical is simpler and that usually ends up meaning more reliable, especially long term.

And more easily fixable in the field – as opposed to at the dealership.

It also comes standard with a manual locking tailgate – and a physical/mechanical ignition key. If you drop it in the river, you won’t have to call for a tow. And you can get a new key cut – which is a lot cheaper than buying a new fob.

The main gauge cluster is analog – needles and dials – and to the point.

You can call up useful, driving-related info such as angle of inclination and declination on the accessory LCD screen in between the main gauges – but there’s not so much info that you lose yourself in it. 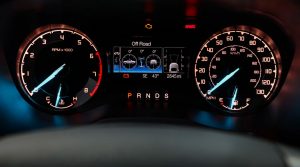 And the Ranger’s relatively simple – mostly analog –  cluster is likely to last longer and be a lot cheaper to replace if it ever stops working.

It feels much more substantial – especially on unpaved roads. The extra weight keeps the leaf-sprung/live-axle rear from bouncing excessively. But the main differentiator is that the reimagined Ranger has power to spare; more power than a ’90s-era Mustang GT Cobra – and is nearly as quick, even though it weighs hundreds of pounds more.

The old Ranger had its virtues, but speed was never among them.  Now it is. 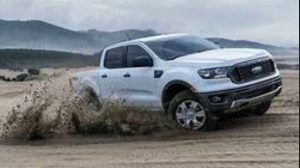 Another virtue of the new Ranger relative to two of its three same-sized rivals is its much tighter turning circle: 41.9 feet vs. 44.1 feet for the Tacoma and 43.6 feet for the Frontier. Both of these two are fairly ancient trucks – the Nissan dating back to 2004, when it was upsized and the last time it was appreciably updated.

The GM twins have the tightest turning circle – though (again) it’s not by much: 41.3 feet. 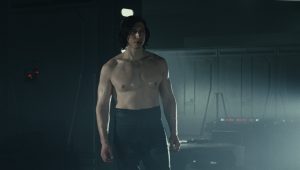 It’s a vey capable of-roader, arguably more so than current half-tons with similar equipment but which are wide-bodied that negotiating narrow trails with trees on either side is almost a people of WalMart situation. 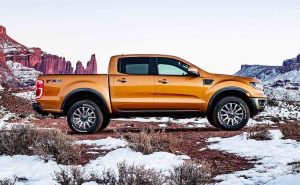 Regardless of cab/bed configuration, the Ranger is the same overall length – 210.8 inches.

The old Ranger (regular cab/six-foot bed) was just 189 inches long overall – so not much longer overall than a typical mid-sized car. It had the virtue of being as easy to park as a mid-sized car.

Which you can’t get in a Ranger anymore. 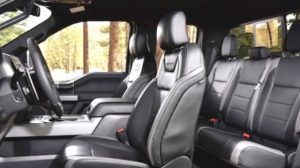 Or any other mid-sized truck.

This truck – and all the other trucks in the class – only comes with a short (and shorter) bed. The Super cab gets a six-foot bed, which is short in relation to the rest of this upsized truck.

If you go with the Crew cab and four full-size doors, you have to accept the shorter 5.1 foot bed – which is the only way this one comes.

Which means that while it can carry more people – and pull a lot more – than the old Ranger, the new Ranger can’t carry more in its bed. And if you get the Crew cab, it carries less.

So why not offer a regular cab – or an eight foot bed? 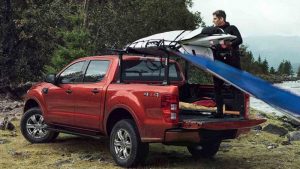 Probably because that would undercut current full-sized trucks like the F-150, which are available with both of those things . . . for a lot more money. If people could get those things for less money in a Ranger-sized package, many probably would.

So the Ranger is oriented more toward being a recreational people-carrier than a carrier of sheets of 4×8 drywall.

Which it does quite well. 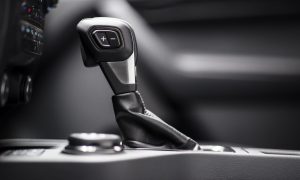 The not-turbo’d engines in rivals like the Frontier, Tacoma and GM twins may not have the balls – but will never hit their owners with a huge bill for a new turbo or intercooler.

And their transmissions – especially the Frontier’s and Tacomas – are older, proven designs with four fewer gears and so fewer moving parts and so less to potentially go awry at some point down the road. 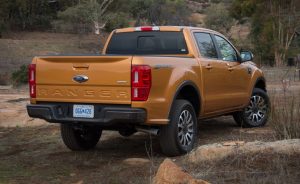 ASS – automated stop/start – is also (unfortunately) standard. As are Forward Collision Assist and Automated Emergency Braking, even in the base XL  – both of them arguably a tag-team of electronic idiot-proofing and incremental/get-them-used-to-it-piecemeal automated driving tech.

Three or four years ago, this e-Nannying/Big Brothering was found mostly in higher end cars and so mostly avoidable. It is becoming standard – and so unavoidable – even in the lower-trim versions of bread-and-butter vehicles like the Ranger.

They can, at least, be turned off.

It’s nice to see the Ranger back on the roster – especially with more engine than most of its rivals. And much more to come. There is a Raptor version of the Ranger on the way.

If Ford were to endow it with more bed, it would be even nicer.