How much are you willing to spend on a car in order to avoid spending money on gas?

This is the question that rarely gets asked whenever the subject of plug-in hybrids (and electric cars) comes up but ought to be asked – and answered  – by anyone considering buying either.

Plug-ins such as the Ford Fusion Energi hybrid do have some functional advantages over the purely electric car, such as a Tesla Model 3. 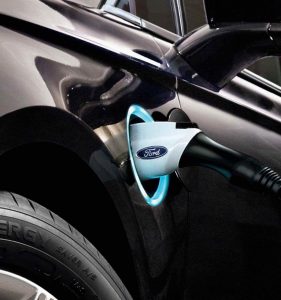 The big one isn’t range – though the plug-in has a definite advantage there as well, because it can fall back on its gas-burning engine when the batteries wilt.

The plug-in’s biggest advantage over the purely electric car is not having to interrupt your trip (or plan your trip around) recharging. When the plug-in’s battery pack runs low, the gas side takes over. You don’t have to stop. And even when you do – for a refill – it’s for the five minutes or less it takes to gas up.

With purely electric cars, you have to stop when the batteries wilt. And then you have to wait for at least 30-45 minutes – the very best-case scenario – if you can find a “fast” charger. If not, if all that’s available is standard 120V outlets, then you are looking at a 6-12 hour pit stop. 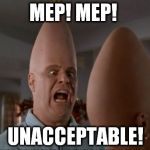 It’s why purely electric cars are still a small fraction – less than 1 percent of the new car market. Being green – or just liking the idea of electric-powered cars – is dandy but when all is said and done, most people just want to get in and go – without having to stop and wait.

It palliates the problems of the purely electric car. No range anxiety; no DMV-esque queues awaiting a recharge. And you can avoid buring gas, or at least burn less gas. Salve.

But, the plug-in, like the purely electric car, is expensive.

Which brings us back to the question . . . 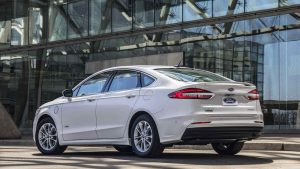 The regular Fusion hybrid – like other non-plug-in hybrids – can only operate on battery power for short distances, at low speeds (30 MPH or less) and mostly uses the hybrid side of its drivetrain to power accessories when the car isn’t moving, or to supplement the power of the gas-burning side of its hybrid drivetrain when it is. 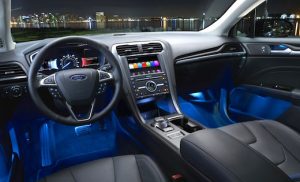 This means that if your trip is within the electric-range of the Energi, you can potentially get there without burning any gas at all, which you can’t do in the regular Fusion hybrid.

And because it is a hybrid, it also means you can go farther than the 25-or-so miles on electric drive only. No having to stop for a 30-45 minute “fast” charge. Just gas up – and go. Plug in when you get home – or have the time to wait.

You could also skip the hybrid drivetrain altogether and buy a regular Fusion for $22,215 to start – and put the roughly $11,000 you just saved toward gas for the next 20 years. 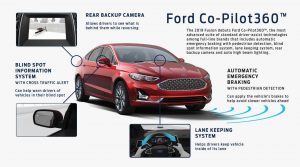 The Energi gets a more powerful 9.0 Kilowatt-hour lithium-ion battery pack, which increases the car’s range on the electric side of the hybrid powertrain by 20 percent.

The exterior of all Fusions – hybrid and not – has been tweaked slightly as well. 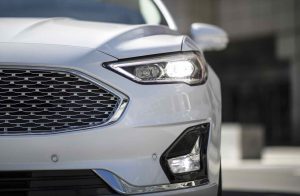 Electric-only range increases; might be enough to make it where you’re headed without falling back on gas.

Mileage – if you have to burn gas – is excellent for a large car; I averaged almost 38 MPG over the course of a week-long test drive.

As expensive (just about) as an electric car, but doesn’t go nearly as far on just electricity.

Rival plug-ins like the Chevy Volt go twice as far on just electricity.

Because it’s a converted hybrid, the Energi’s trunk is almost nonexistent ( 8.2 cubic feet) to make room for the batteries. 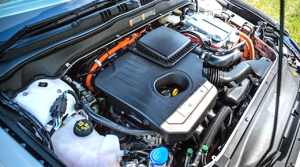 The gas side of the Fusion Energi’s hybrid powertrain is a 2.0 liter four cylinder engine paired with a continuously variable (CVT) automatic transmission; the electric side is a lithium-ion battery pack and electric motor, which can power the vehicle for up to about 25 miles, at speeds as fast as 70 MPH.

That’s an improvement over the 2018 but still only about half the range of the Chevy Volt – which can travel about 50 miles on the electric side of its hybrid powertrain. The Volt differs from the Fusion in being a purpose-built plug-in hybrid, while the Fusion Energi began life as a conventional (IC engined) car which was converted into a hybrid car. 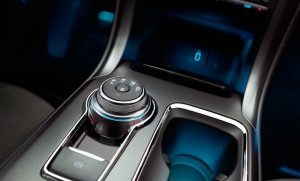 Both differ from pure electric cars in not being limited by the range capability of their batteries – or requiring you to stop to recharge. Each can be refueled just as quickly as any other car and driven much farther than any currently available electric-only car. About 400-plus miles, regardless. 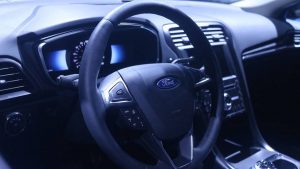 They each are less efficient when their gas engines are running – but neither of them stop running when the batteries do.

At least, as long as you still have gas in the tank.

Both return about the same mid-high 30s mileage on the gas side of their hybrid powertrains in mixed-use/real-world driving.

Both also advertise triple digit “e” MPGs- which is a hard-to-parse mix of their mileage on both gas and electric and your actual mileage will vary considerably, depending on how you drive – and how far you have to drive. 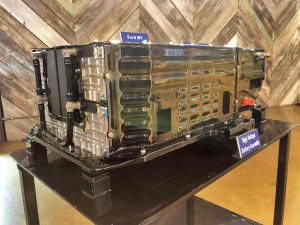 If your drive is within the battery-only range, or mostly so, your overall mileage may be much higher than mid-high-30s and may even be infinity – assuming you can keep it plugged in and so keep the gas engine from ever coming on.

The Energi’s battery pack (like the Volt’s) can be recharged externally – via a plug-in port on the driver’s side front fender. It accepts either standard 120V household current or 240V current. On 120V, expect to stay plugged in for six hours or more to recover a full charge; on 240V – “fast” charging – you can get 80 percent of a full charge back in 30-45 minutes or so. (Fast charging is harder on batteries, which is why – as a safeguard – the charging is limited to 80 percent of capacity.) 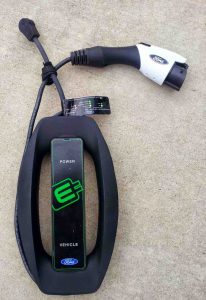 The Volt weighs less (3,519 lbs.) because it’s a smaller car, with a much tighter back seat (more on this below). But it’s still beefy for its size.

A Tesla 3 is much quicker than either of them – zero to 60 in 5.4 seconds – but the base Tesla 3’s range is only about 150 miles and once you hit the wall, you’re stuck for at least 30-45 minutes waiting for a recharge, assuming you can find a “fast charger. 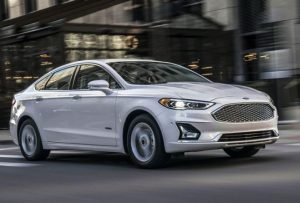 Driving a plug-in hybrid is about managing how you drive.

Because it is a plug-in, you don’t have to drive it any particular way. If you don’t have time to plug it in – or just forget to – no worries. You can still drive, just like any other car. Unlike an electric-only car. Which you have to remember to plug in.

The electric car will not let you forget.

You also do not have to think about the batteries running low because you are driving fast – or driving farther than you had planned. They will run low more quickly if you drive fast, of course. But it doesn’t really matter in the way that matters most; i.e., being left kaput by the side of the road if you do run low. 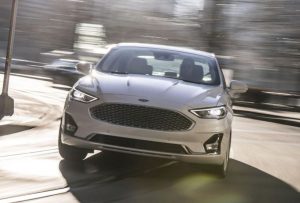 As it would matter in an electric-only car. Which you can’t just gas up anywhere, in a few minutes.

The Fusion Energi has the potential to cut your gas bills in half (or even more) but only if your drive lets you operate on the electric side most of the time. That also means keeping the batteries charged up, which means remembering to plug in before you drive – and having the time to wait in between drives. 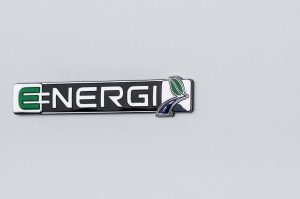 My drive makes it hard to make the most of a plug-in like the Fusion Energi because it’s about 30 miles to get there – and the same 30 back. I found that I could get about two-thirds of the way there on the electric side if I drove gingerly, optimizing terrain – coasting on the downhills, just enough throttle pressure on the straight and level to maintain speed.

But about 5-10 miles or so from my destination, the little charge indicator would be down to the last bar and the gas engine inevitably stepped in – taking up the slack for the wilted batteries. No problem – in terms of not having to stop. But now you’re burning gas. 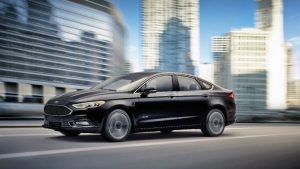 On the gas side of the hybrid drivetrain, the Energi averaged about 37 MPG.That’s very good for a large sedan – and about 10 MPG better overall than the non-hybrid version of the Fusion sedan with the 2.5 liter engine (21 city, 32 highway). But the Energi costs about $11,000 more than the non-hybrid Fusion ($22,215) and about $8,000 more than the Fusion hybrid (no plug-in capability).

The Chevy Volt isn’t cheap, either – $33,320 – but it can go 50-plus miles before its batteries wilt and the gas engine kicks in. That makes it easier to avoid burning gas – and thus, save money.

Still, it’s a long way to Break Even vs. a non-hybrid. Or even a standard (non plug-in) hybrid.

This may be a pro or a con – depending on the value you place on space.

The Ford has much more backseat legroom than either of the others – 38.3 inches vs. 34.7 inches in the Volt and 35.2 inches in the Tesla. That makes it more family friendly when it comes to carrying passengers. 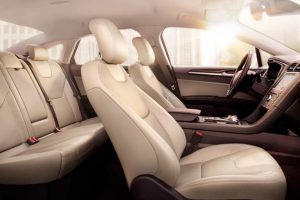 On the other hand, it won’t fit into tight curbside spots the Chevy and the Tesla can take advantage of.

The Fusion is also – unlike those two – a converted hybrid. It was not designed from the floorpans up to be a plug-in hybrid or a purpose-built electric car. It began life as a car designed for an IC drivetrain. Then Ford decided to use it as the basis for a hybrid, after the fact. 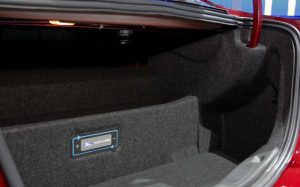 One consequence of that is a Miata-sized 8.2 cubic foot trunk.

Because the batteries have to go somewhere.

The Volt’s and the Tesla’s are spread out more evenly over the length of the car and in the case of the Tesla, there’s no engine taking up any space at all. Which is why it has a 15 cubic foot trunk – almost twice the size of the Ford’s.

So, apples – and oranges.

What you want depends on what you need. 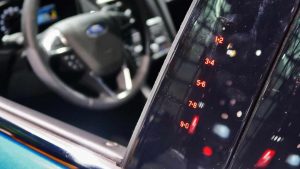 While Tesla tries to make up for the range/recharge issues with acceleration and the Chevy Volt focuses on practicality, the Fusion Energi leans on luxury to swoon prospective buyers. 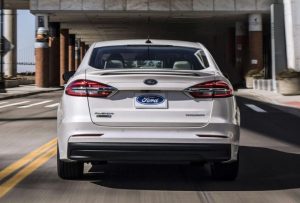 One of the Fusion’s unique features – a handy feature – is its keypad entry system, which is a kind of fail-safe/back-up in case you lose the key fob. So long as you don’t forget your combination, you’ll never be locked out of your car.