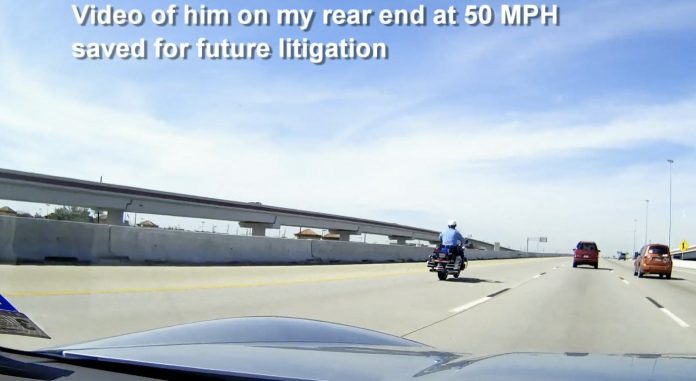 Not American Express. Not even a radar detector – though that is much more important than any credit card.

A camera. To record what you didn’t do – and what AGWs do. It might not only save you from getting a ticket – it might just save your life.

A Texas motorist captured video of an AGW on a motorcycle who did what AGWs often do to intimidate motorists who’ve broken no law – tailgate them – which is either a vehicular dominance display or an attempt to fluster the motorist and get them to do something they can be “cited” (i.e., mulcted) for such as a tire touching the painted line (i.e., “weaving,” sufficient pretext to stop the motorist for a “check”).

The motorists records this – and what follows – which includes the biker AGW riding well above the speed limit he murderously mulcts others for exceeding, hogging the left lane/refusing to yield and then practically stopping in the middle of the highway to brake check the motorist behind him – a reckless act that would have incited a severe Hut! Hut! Hutting! if the motorist had done it to the AGW.

As the video of this encounter rolls, we see the AGW appear to remove his name tag – an ominous sign. We also see the AGW pull over the motorist and attempt to gas light him. The AGW is bellicose and characterizes the driver’s actions as illegal/dangerous – all while keeping his murderous hand on his pistol. 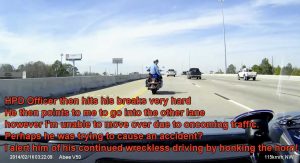 But the motorist stands his ground and informs the AGW that he has the whole thing on film, including the tailgating that initiated the adventure and the subsequent speeding (85 in a 65, apparently – a “reckless” driving cite in some states) as well as the actually reckless stopping in the middle of the road to assert his Authoritah.

The AGW’s “supervisor” appears and a conclave ensues. The “supervisor” is polite and within a few moments the man is allowed to proceed on his way without having been mulcted, Tazered or shot.

Because he filmed the whole sequence. 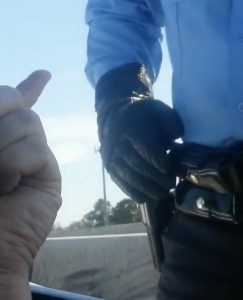 Inarguable, incontestable proof of the AGW’s illegal actions as well as his psychiatric problems.

The motorcycle AGW can be diagnosed as an angry, vengeful, control freak thug – probably someone with a borderline personality. And someone with a government-issued badge and gun.

He clearly sees himself as not merely a law unto himself but above the law – and to question his Authoritah is to invite a murderous response (note the hand on the gun).

Had the man in the car not clearly had the video goods on the goon, this encounter would almost certainly have gone very differently. 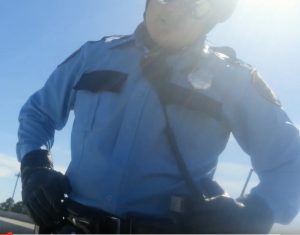 It is pretty clear from the video clip that the AGW was itching to mete out some curbside “justice.”

And – absent the video – his version of events would have been taken as probative on the theory that AGWs never quibble or lie and don’t abuse their Authoritah.

Which of course, they do all the time, both small and large scale.

AGWs routinely exceed the speed limit we’re required to obey and punished for not obeying; they almost never wear the seat belts we’re forced by them to wear. And they routinely abuse people under color of law – using their badge and the threat of state-sanctioned summary execution which it confers (there’s no appeal from the morgue) to do so.

Even when they are caught on film doing it, there are rarely repercussions – and if there are, they are almost always much milder than they would be if a non-AGW had been caught red-handed (and on film) doing exactly the same thing. As here.

This AGW will not be arrested. He will not be charged with reckless driving or menacing/brandishing his weapon. No doubt, he is still on the road, “serving” his borderline personality’s lust to dominate and abuse people who aren’t legally allowed to defend themselves physically.

However, a camera – and live-stream to the Internet – is still a potent form of defense. It may be the one thing that gives a psychopath with a badge and a gun pause. Keeps his gun in its holster.

And you in one piece.