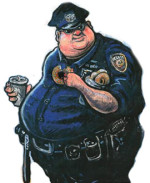 In a valiant effort to maintain public safety and order, Officer Race, Badge ID 6856, put her own life on the line and approached Mr. X. Her reasoning for conducting herself in such an heroic manner? She suspected Mr. X was smoking a cigarette, outside!! The horror! Luckily taxpayer money was being used to pay Officer Race and the two other officers to protect the rest of society from this horrible man.

Obviously there is a tinge of sarcasm in the previous paragraph and that was used to shed light on the utter stupidity of taxpayer money being used to shakedown innocent people. This gentleman had done absolutely nothing wrong yet three officers felt it necessary to detain, harass, and ticket him.

Who exactly are the police protecting in the video below? Who are they serving? It is time we start asking these questions more often.