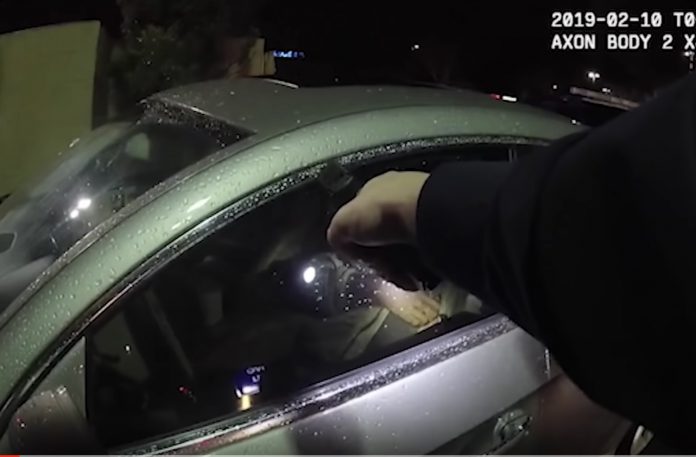 AGWs in Vallejo California have just been absolved of shooting a man apparently passed out in his car 55 times.

The investigation into the killing of Willie McCoy found that the lead fill-up by six AGWs was “reasonable.” Watch the video and decide for yourselves.

McCoy, 20, had gone to the Taco Bell drive-thru. After getting his food, he lost consciousness for reasons not yet determined. He may have been drunk or high – but he wasn’t violent. It appeared he had the munchies.

Taco Bell employees called for a “wellness check” when they noted McCoy passed out in his car, which was still in the drive-thru lane.

AGWs appear and begin to bark orders at McCoy, who isn’t registering perhaps because he’s groggy an didn’t expect to be surrounded by armed and belligerent strangers. He has a gun and the AGWs see it. Within seconds of McCoy beginning to rouse himself they end his life in a hail of bullets from multiple directions.

Some will say – He had a gun and may have been reaching for it! – which is exactly what the AGWs did say. But McCoy wasn’t threatening anyone at the beginning of this exercise in close-range target practice.

He was passed out in his car – a passive activity.

The AGWs blew him away on the usual hair-trigger notice; McCoy had guns pointed at him before his eyes were even open and was fired upon with seconds of opening his eyes. His fate was sealed because the AGWs “saw a gun” – and at that point, any movement is often deemed “reasonable” reason to shoot the victim.

See, for instance, the Daniel Shaver case – and all-too-many others.

McCoy was one man, half-conscious, in his car vs. six AGWs who gave him almost no opportunity to show himself not suicidal – which is what he would have had to have been to get into a gunfight from inside a car with six AGWs outside the car.

Or even fully conscious.

We are often told – urgently – that AGWs are “heroes.” But real heroes are defined by two qualities lacking here: Courage – and putting one’s own safety at risk for the sake of others.

They could have backed up from the car when the saw that McCoy was armed, putting themselves out of any real danger – and given him a few seconds to wake up.

Had McCoy then pointed his gun at them, it would have been reasonable for them to fire in necessary self-defense.

But this was something else.