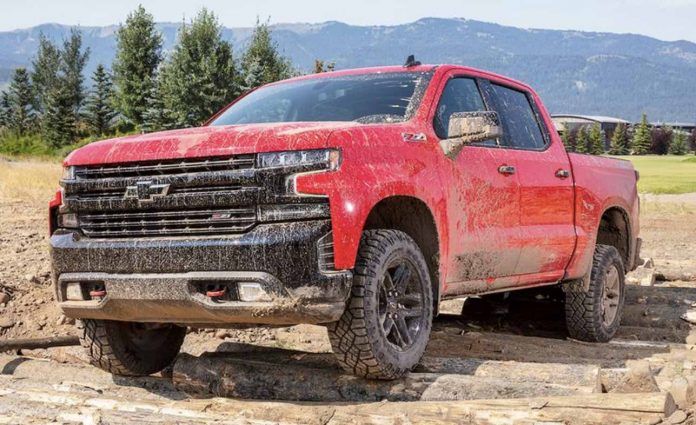 Sometimes, “diversity” is not our strength – as GM is finding out.

The Chevy Silverado pick-up is now number three – behind the Ram 1500 and the best-selling (and number one) Ford F-150.

This is alarming news for GM – assuming it still cares about making money as opposed to demonstrating how “committed” it is to “diversity” (see here) which is an odd preoccupation for a car company.

For example, Out With Chevy – which wasn’t a big brothery slogan ginned up by someone who doesn’t like the bowtie but invented by Chevy product PR people – to celebrate “coming out” in the you-know-what-it-means sense . . . which has what to do with trucks or Chevys I have no idea. 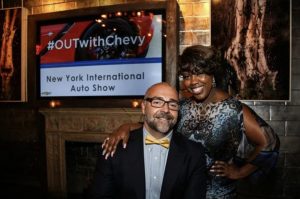 People who buy trucks want to know about the trucks – what’s it got under the hood – not what people are doing under the sheets, or with whom.

Well, while Chevy was establishing its “commitment” to “diversity,” FiatChrysler was jamming out Ram pick-ups  . . .  and selling them. Almost 37,000 more of them than Chevy has found buyers for over the past ten months.

This is huge news all by itself because Ram trucks – formerly Dodge trucks – have historically lagged way behind both Chevy and Ford, the two major hegemons of the full-size truck market.

Especially painful – for Chevy – is that the Silverado is “all new” – and so ought to be more rather than less popular. The old Silverado outsold the Ram. 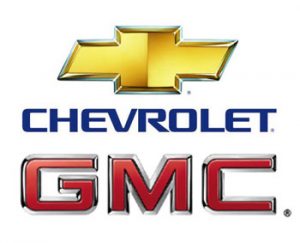 Arguably, because of a different kind of “diversity” afflicting GM’s ability to be competitive.

GM’s brands are too “diverse.”

There is the Chevy Silverado . . . and the GMC Sierra. Both essentially the same truck and sold by the same corporation under different labels. Which means duplication of effort as well as marketing expenses as well as in-house competition in addition to and prior to competing with Ram and Ford.

GMC once sold heavier-duty trucks than Chevy trucks and so there was a difference and so a justification for GMC. But that was decades ago. Today, everything GMC sells is a priced-up version of what Chevy sells. This makes Chevys seem “low rent” – and not just relative to GMCs.

At the same time, GMCs are too expensive – relative to Rams and F-150s – especially since they are just repackaged Chevys. 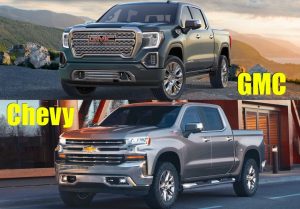 It would seem to be sounder policy to sell just one truck – under one label.

Of course, getting rid of GMC would make GM less “diverse” as a brand – and that is probably why GM isn’t doing it (dealers would squeal) and probably won’t do it until it is forced to do it by painful economic realities – which is what it took to get rid of Potemkin Village brands like Pontiac, Oldsmobile, Saturn and Hummer last time around.

There is another, perhaps more interesting angle to this story – a third form of “diversity.”

FCA’s Ram truck division is still selling the old Ram alongside the new Ram – and the old one is selling so well it has helped put Ram ahead of Chevy. Why the old Ram sells so well is interesting in and of itself. Probably, because it hasn’t got the latest driver “assists” – which many find annoying and all will find expensive. 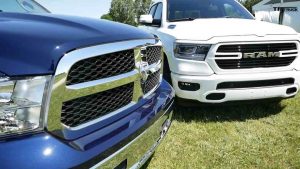 Ram’s “diversity” works in its favor because you don’t have to shop elsewhere – or another, higher-priced brand within the same company – to get what you want. 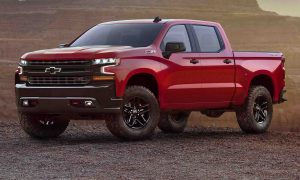 There’s one final iteration of “diversity” that is probably causing problems for GM. It is under the hood, where you’ll find what amounts to an affirmative action engine. A four cylinder engine . . . in a full-size truck.

It makes V8 horsepower – via heavy turbo-boosting – but for many potential truck buyers, the idea of a four, turbo’d or not, probably doesn’t sit well.

The Silverado still comes standard with a V6 – and you can get it with either of two V8s – but image is at least as important as tow ratings when it comes to trucks.

And a full-size truck with a four does not look good.

Speaking of which, the new Silverado may not be doing well because it doesn’t look good. 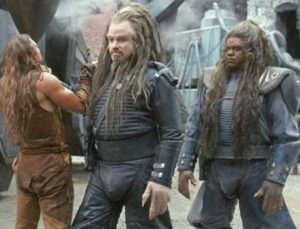 While all the current 1500s are beset by Cod Piece Fever – almost cartoonishly exaggerated stylistic bravura in the form of bed walls higher than the border wall Orang Man wants to build and blunderbuss front ends – the new Silverado takes this to a new level. The thing looks like a prop from the latest Transformers movie – which appeals to eight-year-old boys but grown men not so much.

Barry Engle – who is GM’s North American jefe – says the Silverado’s ED is a “temporary phenomenon.”

But have a look at some troubling numbers – if you’re Engle or work at GM.

It’s not just that Ram has sold more trucks this year – so far – than Chevy has. It is that Chevy used to sell several times as many trucks as Ram used to sell.

This is what comes of focusing on “diversity” while others are focused on building trucks people want to buy.