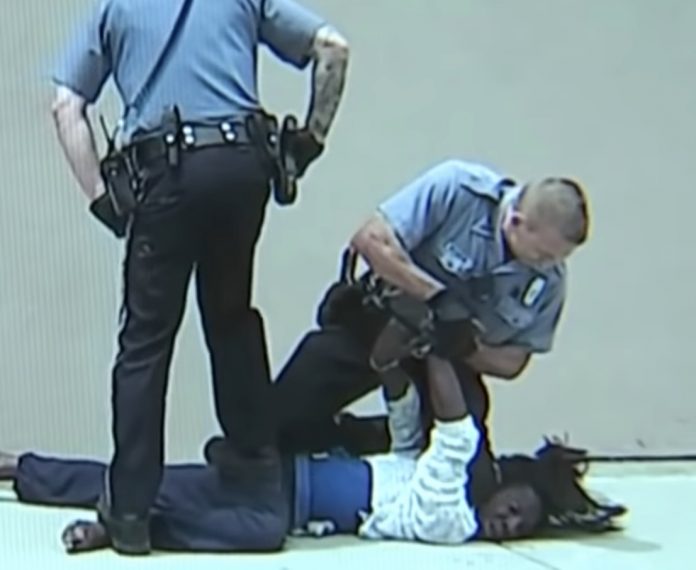 Here’s a new one – or at least, a newly admitted one: Pain Compliance.

This is the use of physical torture to subdue the victim of it to Authority.

The fish does, indeed, rot from the head down.

In the video below – taken in Kansas City and the subject of a local CBS news affiliate story – a man happened to be in the vicinity of a pair of AGWs who were applying Pain Compliance to the person seen handcuffed and prone on the ground. The Pain Compliance technique applied in this case involves threatened dislocation of the subject’s shoulders, a literally medieval practice that is not only excruciatingly painful but something which can easily cause lifelong pain.

An AGW Apologist explains that handcuffed and prone people can “still be a danger” to AGWs. In fact, the only “danger” is to the Authority of the AGWs, which remains affronted when any person isn’t entirely supine and screaming in agony.

Which is the true object of this exercise.

What, exactly, would have happened had the AGWs just left this particular victim handcuffed and on the ground? Have you ever tried getting up while handcuffed and laying face down on the ground? It is not easy – and the idea that such a person could “still be a danger” to anyone is ludicrous.

It calls to mind the scene in Monty Python of the Black Knight – who has had both his arms lopped off and is hopping around on one leg insisting the fight’s not over yet.

Try running away with your hands cuffed behind your back.

Try fighting someone with both hands cuffed behind your back.

Unless the person is a mixed martial arts fighter, his ability to “still be a danger” to uncuffed and armed men is right up there with the Black Knight’s ability to continue the fight.

The poltroonishness of AGWs is equalled only by their sadism.

The  man taking the video was himself the object of “enforcement” by the AGWs – for filming the application of Pain Compliance. He was issued a ticket – i.e., had money stolen from him – by the AGWs, who accused him of blocking the street – which he clearly wasn’t doing as you can see in the video he took.

The ticket-extortion was purely punitive – administered to show Who’s Boss.

Luckily for the man, he wasn’t given a dose of Pain Compliance.