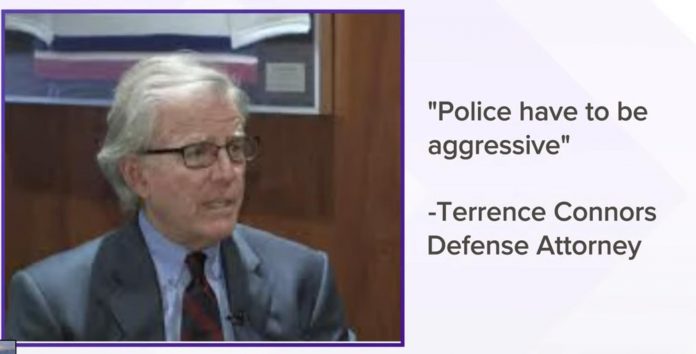 Here’s local news affiliate coverage of a Buffalo, NY armed government worker named Corey Krug – on trial for use of excessive force for the third time. He has been accused and acquitted at least twice before already.

This third time is a new time.

Corey smashed a man’s face onto the hood of his car, then used a baton to whack at the man’s legs. The man was not charged with any crime, so it’s unclear what the legal justification was for the badged beatdown, but probably was triggered by an affront to the authority of the AGW.

The AGW’s lawyer says, “police have to be aggressive.” No, they don’t. This “aggression” is precisely why we have an AGW problem.

We used to have police, who were expected to exercise judgment. Aggression was considered a last resort, to be used when there was no other choice and the situation demanded it for the sake of public safety – not “officer safety.”

Today, we have hair-trigger AGWs encouraged to be aggressive at the first sign of the slightest failure of a “citizen” to submit and obey. This includes questioning an AGW’s orders, even if done entirely without violence or even raised voice.

It’s worth observing in this context that anyone not wearing a government-issued badge is prohibited by law from being “aggressive” – that is, physically violent – unless in clear self-defense against violence. A citizen cannot get away with a physical assault because he felt affronted.

Why are AGWs allowed to curb-stomp people for the same “offense”?

The World Before Face Effacing

An Upside of the Lockdowns