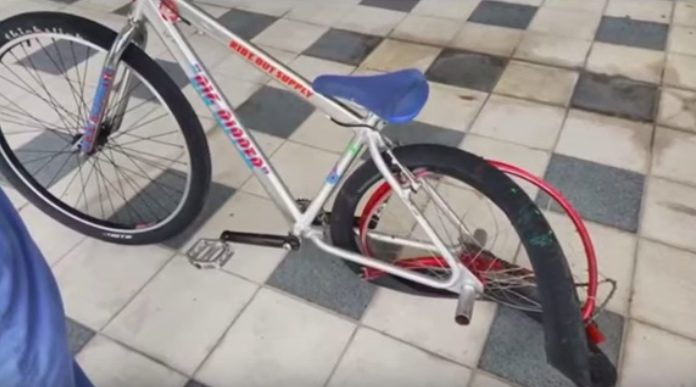 Here’s local news coverage about a teenage kid in Hollywood, FL Hut! Hut! Hutted! by armed government workers for popping wheelies on his bicycle. An AGW used his car to ram the kid’s bike – then several AGWs tackled the kid, who was also Tazered several times.

For riding bicycles in an unapproved manner.

In a statement released to the media, a Hollywood AGW spokesman claims the Hut! Hut! Hutting AGW’s two-ton vehicle made “incidental contact” with the kid and his bike and that this “contact” was “accidental.”

But how so? The AGW deliberately chased a kid on a bicycle using his AGW SmooVee. Isn’t this like “accidentally” pointing a loaded gun at someone?

Keep in mind the Great Crime here that needed to be stomped (or rather, run over). A kid popping wheelies on his bicycle. Kids used to do that all the time – once upon a time. Before America went bat guano and empowered armed and dangerous psychopaths to use their vehicles to run them over for such “offenses” – which used to be just kids having fun.

Which they’re not allowed to do anymore.