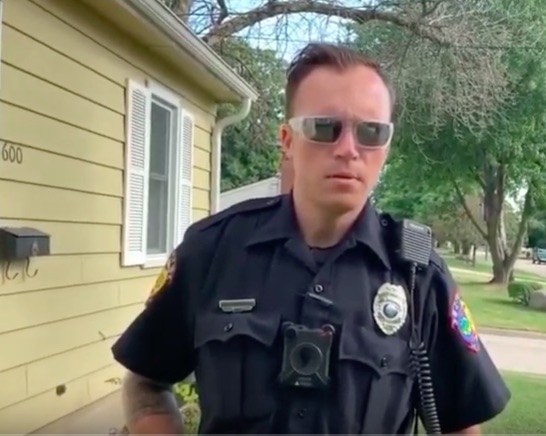 Here’s video of another AGW who seethes  with contempt for the law he’s supposed to enforce – and respect.

A man is confronted on his lawn by the AGW, who demands ID. The man refuses to provide it, then tells the AGW he isn’t interested in playing verbal patty cake; he asks whether he is being detained – or is free to go.

This is a basic legal question which the AGW is obliged – as a matter of law – to answer. If the AGW has no legal basis for detaining a person, then that person is free to go. What this AGW did was to use his badge and gun and the murderous violence implied by them to force the man to stay put without any lawful basis for doing so – a criminal act if done by anyone else.

A felony, if done under similar circumstances by one of us.

Imagine walking up to someone on the street while carrying a gun – and preventing them from walking away by dint of having that gun. They ask you to leave them alone; you refuse – they “comply” out of terror, you being armed and clearly a psychopath.

This is what the AGW did… under color of law. Under protection of the law – which applies a double standard to AGWs who abuse it, break it and otherwise flout it, often without the slightest repercussions.

In this case, the AGW should have been charged with unlawfully detaining the man as well as bullying him by refusing to answer legitimate/lawful questions regarding the man’s legal obligations – and refusing to leave the man’s property, despite being repeatedly asked.

At least the man wasn’t Hut! Hut! Hutted! by this low-IQ tatoo’d goon.