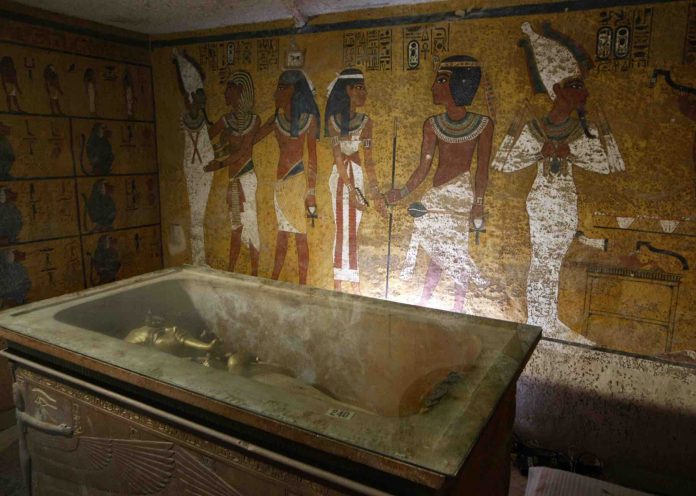 I had an older friend once who owned a couple of classic cars he never had time for. He worked, so they sat – and deteriorated. Lack of use is its own form of abuse. As I have just discovered, having morphed into my friend.

Like him, I find I no longer have the time I once did – because I almost always work. On the articles, doing the interviews or just getting ready for them. That plus not being 25 anymore and being divorced has led to what I thought could never happen to me. 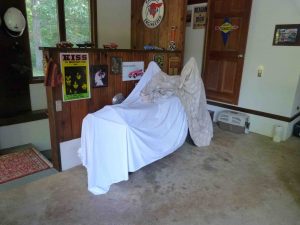 I’m now the older guy with the neat old cars and motorcycles that mostly just sit.

My Trans-Am and classic bikes, including Little Stinker (the ’75 Kawasaki S1 two-stroke I restored about seven years ago – it feels like last summer) have become mechanical mummies in a dusty museum  . . . my garage.

The only sign of life the hopeful winking green light from the trickle chargers, a plea for attention. We’re here!  . . . Don’t just  . . . leave us.

And I did. The whole summer sailed past and Little Stinker hasn’t been out since Spring and that was months ago. 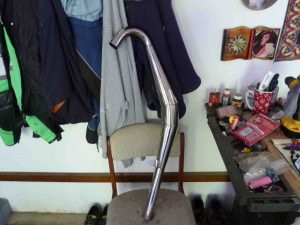 Times does its evil work on men and machinery. I pull the shroud back, to have a closer look. The tires are low and I may have flat-spotted them but far worse and what defibrillated me into immediate action was the ugly little blotch of incipient rust on the factory-stamped NOS spoked rear wheel I’d installed during the resto (the original was pitted beyond redemption). I knew this would metastasize into terminal ferrous cancer if not addressed right now.

And as I did, I found more evidence of decay caused by my neglect. 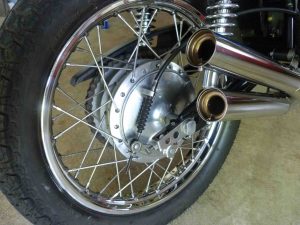 The rear grab rail – also a brand-new NOS piece – had a spot on the underside. I discovered it like a dentist does a soft spot on a back tooth.

Then another on the underside of one of the three chambered pipes I’d had shipped all the way from the UK and which are the sole blatantly obvious deviation from the factory Kawasaki exhaust. These wasp-waisted pipes upturn jauntily like Satan’s bagpipes as they taper backward. The sound emitted from this 250 cc bike is fiercer than anything produced by a modern four-stroke bike. It is like three chainsaws cutting cords – not wood, the musical ones – each timed and pitched to complement the others.

They are striking to view, but that’s only half of it. 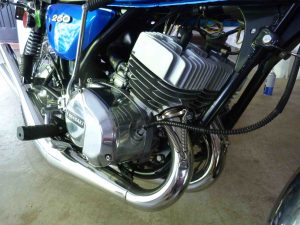 If you never actually ride a two-stroke triple from the ’70s – which is smart policy unless you have just the right combination of ignorant fearlessness and luck enough to survive the trip – listening to one punch holes through the air is not to be missed. Still-life museums are like taxidermy shops; you don’t get the sense of the real thing by looking at a stuffed (and mute) corpse.

So, the pipes came off for careful cleaning and polishing. This was necessary as well in order to gain adequate access to the Kaw’s underside, where the dust had congressed with the oil that a two-stroke leaks from every pore as well as puffs from its pipes – and this can only be dealt with successfully via up-close and personal, fin-by-fin and casting by casting wipe-downs with a soft old towel and a bottle of spray detailer.

This is less harsh than water and a brush. Better, too, as the water (depending on your area) may have things in it that will discolor/stain what you’re trying to clean and can also accelerate the rust you’re trying to prevent. Water also gets sprayed gets everywhere – and can stay there, if you haven’t completely dried the bike off, which may not be feasible if it’s not in running order. 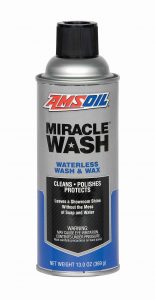 The spray detailer is just the right pH – and the cloth is gentler. Spray some onto the cloth, then work it through each cooling fin (modern water-cooled bikes lack them, which further homogenizes them and is the reason why most modern bike engines are hidden underneath colored plastic; there’s no much worth seeing under that plastic) and then into and around the ridges and valleys of the cases.

Wipe down the frame tubes and swingarm, too.

The spray detailer is also just right for the seat, the gauges and turn signal housings. It’s important to keep abreast of the towel’s condition and change it out as dirt accumulates . . . before too much accumulates, otherwise you’re more sanding than cleaning.

Chrome polish for those NOS “correct” Kawasaki rims, also applied using the towel and by hand. This is the most arduous detail of detailing the two-wheeled blue Barchetta. You have to get around the spokes – and do them, too. There are about two dozen. 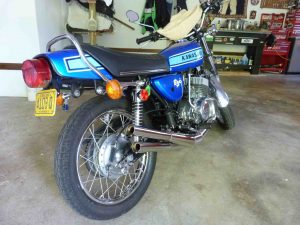 Then work around the nubs, bringing the inner rim to shimmering perfection. Don’t forget the sides.

About three hours later and Little Stinker was beginning to look right again.

And I began to feel right about it again.

If a time ever comes when I can’t make the time to keep up with my charges, that will be the time to pass the torch to someone who can. That day will, inevitably, come. It comes for us all. Hopefully, it won’t come for a long time to come.

But when it does, I hope I’ll know it has – and do the right thing.