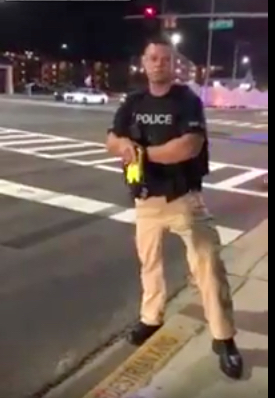 Here’s video of an armed government worker meeting out some summary punishment for affronting his Authoritah.

An unarmed man calls the AGW – who is armed – a pussy, for bullying people under color law, using the implied threat of his government issued badge and gun to back up his Tough Hombre strut.

The AGW is infuriated by the temerity of the  unarmed man, rushes toward him like an enraged bull – and proceeds to apply electroshock therapy. The man is then Hut! Hut! Hutted! by a whole crew of armed government workers.

These poltroons are dangerous not merely because they’re armed – but because they are poltroons. Fear-ricketed cowards hiding behind their badges and guns.