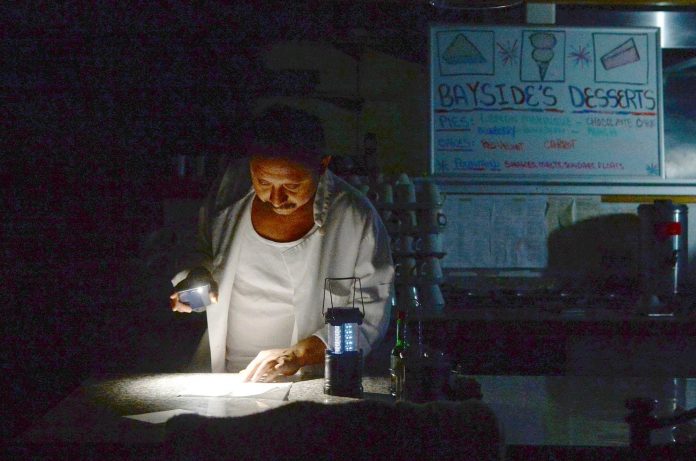 Americans got a glimpse of the Green Future last week – and it was pretty dark.

Deliberate power outages have left millions of people in California with no lights – and no way to recharge their Teslas, either.

And it’s not because there isn’t enough power.

Rather, the state’s utility, Pacific Gas & Electric cut the power – ostensibly to prevent wildfires that might be started by downed (and hot) power lines.

But the real reason for the artificial blackout is PG&E’s massive – and government-mandated –  malinvestment in “green” technologies such as wind farms and solar, which has diverted billions away from critically needed infrastructure investment, such as burying power lines so that Santa Ana winds don’t result in downed lines  . .  . and fires.

California’s very green governor, Gavin Newsome, even admitted this – elliptically. He told reporters last week that the blackouts are the result of “greed and neglect.”

CA’s legislature passed a bill last year (SB 100) that requires half of the state’s energy generation to be produced via “green” technologies  – i.e., wind and solar – by 2026. This created an artificial – because mandated – market for cost-no-object “green” technologies – in much the same way that California created a “market” for cost-no-object electric cars by requiring large numbers of them to be sold in the state each year, even if they have to be given away at a net loss per car.

These deals are reportedly worth $40 billion, according to bankruptcy paperwork filed by PG&E in January.

That’s right. PG&E has run out of money as well as power. Or at least, the ability to safely deliver power . . . without fire.

In part because it bought high – and sold low.

When PG&E made its deal with Topaz, the utility agreed to pay a fixed price for the solar power generated by Topaz that is five times higher than current market price, according to an article in the Sacramento Bee.

PG&E is currently fighting in court to be released from some of these contracts – or at least allowed to renegotiate them. But the obligation to go green isn’t going away.
In fact, it will increase to 60 percent by 2030.

The $40 billion spent so far to go 34 percent “green” (16 percent shy of the 2026 mandated minimum) is on top of an estimated $30 billion in liability for damages caused by the so-called Camp Fire in Butte County last year –  the deadliest fire in the state’s history. It burned more than 240 square miles and reduced 18,804 structures to ash.

The fire was apparently started by a downed power line that lit brush on fire.

PG&E turned the power off last week to avoid a repeat and even more liability.

The Santa Ana winds have picked up – and it is exceedingly dry in Cali. It wouldn’t take much bad luck for another branch to fall on another power line and start another fire – perhaps one even worse than the Camp Fire.

And under California law, PG&E would be on the hook for the damages.

Where will this green come from?

Californians already pay twice the national average for electricity. They may soon be paying even more for it.

And not just Californians.

As in California, utilities in these states are required to generate a certain percentage of their grid power using “renewable” sources – which effectively means solar and wind since nuclear is off the table due to regulatory impasses that have made it almost impossible to obtain approval for new plants – let alone funding.

But solar and wind are also costly – and not just in terms of money.

They are erratic sources of power – being dependent on the vagaries of weather. Also – in California, at least – they provide no insurance policy against grid power going offline because the home solar systems now required by law in CA feed power to the grid when the sun is up – with the idea being that power will be fed back to people’s homes from the grid when the sun goes down.

But when the grid goes down, everyone’s in the dark.

This darkness will spread as “green” mania – and mandates – spreads.

Better top off your Tesla.

Another Bubble… On The Verge of Popping