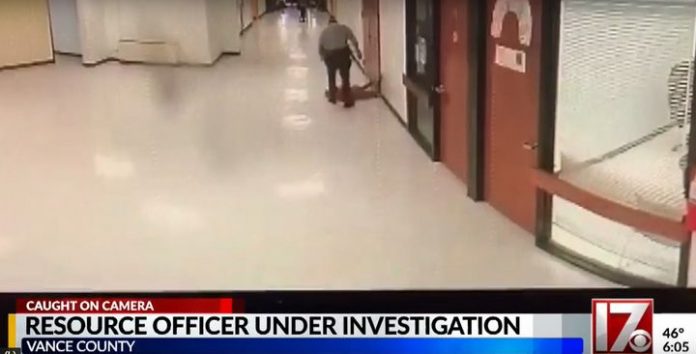 A “school resource officer” – the euphemism for an armed government worker embedded in a government school – has been caught on video Hut! Hut! Hutting! an 11-year-old kid inVance County, North Carolina.

The video shows the AGW grabbing and slamming the child to the ground, then picking him up and doing it again before yanking the child up and continuing to walk down the hall.
“It’s obvious that the child was assaulted,” Jason Spriggs, Henderson City Council member, said in a Facebook Live video. Henderson is the county seat for Vance.
“To see this is just horrifying,” Spriggs said. “It’s a rough video. I can’t imagine my child going through something like that.”
The AGW has been placed on paid leave pending an investigation, Sheriff Curtis Brame told WRAL on Friday.
Vance County Schools released a statement following the incident:
“We are deeply concerned by the actions that took place. School and district officials are working closely and in full cooperation with the local authorities to address this matter consistent with school board policy and state laws,” the statement read. “The safety of our students has been and continues to be of the utmost importance to our district.”
If so, then why resort to armed government workers to perform what used to be the job of unarmed hall monitors?