Jetta Guy asks: Have you thought about attending and blogging from the Barrett-Jackson Scottsdale auction events? I love watching it and learning about classic cars, the restoration car culture, new things going on and such. As with most mainstream media, I have to hold my nose when they push dumb propaganda but that’s par for the course these days. Your take on what’s going on there would be interesting.

My reply: As OJ sometimes says, I would love to!

I’ve actually attended once, years ago. I used to travel to Scottsdale often because my parents lived there. But my dad died back in 2016 and I had to move my mom to Virginia, where I live. That plus the prospect of dealing with the Heimat Sicherheitsdeinst has kept me away from commercial air travel.

Speaking of which: Did you know there is no Rope and Grope if you fly private? Isn’t that interesting? Does the HSD believe that “terrists” lack the means to charter aircraft? Or is it that the whole thing really about habituating the masses to being treated like cattle? 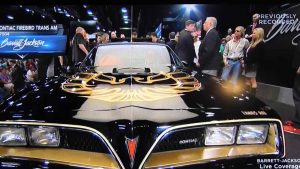 On Barrett Jackson: I’m of two minds on this business. On the one hand, they promote the preservation and restoration of old cars; the auction is a kind of history lesson – even for people who are well-versed in the history of cars. On the other hand, they have also turned the old car hobby into a business. People now buy vintage cars as investments. This has made it very hard for people to buy vintage cars just for fun.

I gibs you an example: A few months ago or so, I watched a ’77 Trans-Am get auctioned off by Barrett Jackson. It was a very nice – meticulously restored – black and gold Special Edition (SE) car, basically a “Bandit” car – from the movie – but not actually from the movie. It was one of probably 100,000 knock-offs of the actual movie cars and so nothing particularly special. It didn’t even have the more uncommon and much more desirable “T/A 6.6” high-performance version of the Pontiac 400 V8 or a four-speed manual transmission. Instead, it had the standard, lower-performance 400 and an automatic.

But Burt Reynolds had apparently signed the car’s dashboard or some such. This pushed the bids to over $100,000 … which is in the same orbit as what ’73-’74 SD-455 Trans-Ams were going for 10 years ago and they only made a few hundred of those. And the SD engine is probably the most special engine Pontiac ever sold to the public, installed in a car.

This is why the old car hobby is becoming a hobby for affluent older guys. Which will mean the end of the hobby when those old guys get too old to deal with old cars. By then, at least a generation will have passed, during which time the youth will have disconnected entirely from car culture.

It will never, I fear, be what it once was.

In part because these cars have become investments rather than just for fun.