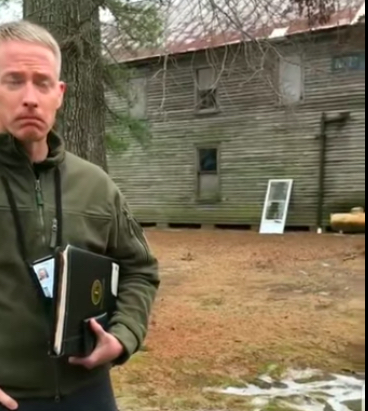 A Virginia man named George Wagner and his wife were the object of a pre-emptive Hut! Hut! Hutting! the other day.

The man had apparently planned on attending the Lobby Day rally held in Richmond yesterday. He visited the area prior to the rally – and took some pictures. This triggered the pre-emptive Hut! Hut! Hut! and serves as a prequel to future pre-emptive Hut! Hut! Hutting! based on what are styled “Red Flag” laws. Which empower the Hut! Hut! Hutting! without the target having violated any law. All it takes to trigger the appearance of armed government workers at your home – and in your home – is “someone” (this includes AGWs) “expressing concern” about the target and his supposed intentions or inclinations. This being a species of phrenology without even the benefit of reading the bumps on the patient’s head.

Here is the full text of the news article from The Virginia Citizen Free Press:

“This incident occurred on Saturday, 01.18.2020 at 8:57 in the morning. My husband became a target of the pending Red Flag Law in VA. The reason the police came is due to a visit George made to the Capitol in order to become situationally aware of his surroundings on Lobby Day. His observations and the pictures he took made Capitol police concerned. George was not the only person on Capitol grounds that day. He was not the only person taking pictures either. But George’s size and stature coupled with his purposeful actions made him a target for a dry run on Red Flag laws on a citizen of Virginia. Red Flag Laws have not been legalized in VA at this point.

At this point you should know that one of them was a Capitol police officer and the other was a State Trooper, homicide division. The two officers had their hand on their weapons when my husband stepped out the door to greet them. And the rest you can see on this video. Please share this with anyone who has questions about the Red Flag Laws being proposed. Trump was correct when he said, “They are not after me. They are after you.”

Armed government workers like the two who descended upon the Wagners could just as easily descend upon you -or me. Upon anyone.

Because there’s nothing to prevent the AGWs from doing so.

No law to protect you from them. No law you violated. Just their extra-judicial claim of “concern.”

And it’s not just Virginia. The Orange Man is on record endorsing pre-emptive Hut! Hut! Hutting! “Take the guns first; go through due process second,” he said.  Maybe he didn’t mean it; maybe he wouldn’t actually do it.

But he did say it.

And in Virginia, they’ve begun doing it.