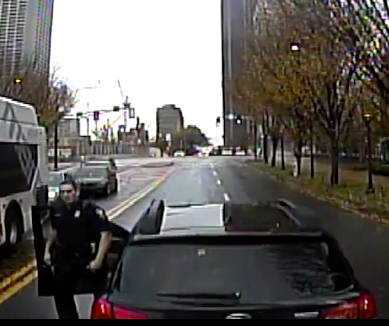 The incident happened on Nov. 23, but video wasn’t released until this week. Because the buses are equipped with multiple cameras, this road-raging AGW was caught from multiple angles going after an innocent bus driver.

“It was scary. The worst part was when he went to arm himself, he went into his car,” Holiday said. “And where I’m from, you get a gun, you’re going to want to use it. I thought he was going to light me up.”

Naturlich, the psychotic AGW  won’t face any charges; according to local news coverage, the AGW was “disciplined internally.”

“The AGW was immediately relieved of duty, and continues to be in on administrative assignment with no law enforcement duties,” Atlanta police said in a statement. “We found the officer to be in violation of our policies regarding appropriate conduct, and he is awaiting disciplinary action.”

The double-standard is luminous.

Any ordinary person who stopped his car in the middle of the road and brandished a gun would be facing felony charges – and almost certainly relieved of his right to possess a gun.

How is it that an AGW – someone who is supposedly “trained” and given special dispensation to carry a gun is subject to a much lesser standard of accountability than any other citizen?