Corona is killing in more ways than one.

In fact, it is killing in worse ways than one.

On the innumerate basis of fear over a less than one-half-of-one-percent chance of dying from Corona (the math based on people infected people vs. people who’ve died) Health Deciders who now insist we regard them as Health Heroes – have not only destroyed the economic lives of more than 30 million people so far (a far higher percentage of “cases” than the percent of the population felled by Corona) they are also tearing families apart.

What follows is a personal story I hesitated to publicize until now because it is not my purpose to embarrass anyone but the White Coats have forced me to this extreme because of their despicable callousness and cruelty – Because Corona – and I will not have it. I also won’t have others having it – or rather, having it imposed upon them, Because Corona.

Perhaps by making a public stink, something positive will get done.

My mother is 83 years old and an inmate at a state psychiatric hospital; not because she is nuts but because she has dementia. She was taken there by the state, which performed a “wellness check” on her about a month ago, based – I believe – on actions incited Because Corona.

Her daily routine for the past couple of years involved walking down the street from her apartment in downtown Roanoke to the bank where she knew the manager and tellers. She would bring them a copy of the newspaper and spend an hour or so talking with them. This was her chief social interaction. Along came Corona – and the bank closed its doors. My sister and I suspect our mom was bewildered by this; she doesn’t understand Because Corona. She’s 83; she’s got dementia.

But she was functional.

I checked on her once a week, paying attention to her condition and the state of her apartment, which was always clean and tidy.

We suspect she was pestered by busybodies about being outside of the building where she lived – Because Corona – and didn’t know how to deal with this.

She had previously gone outside every day, both to visit the people at the bank and to walk her trash to the box outside the building.

A week into being “locked down” inside the building – Because Corona –  she threw some trash outside – from her window – and this triggered the “wellness check” from the Health Sicherheitsdeinst, which spirited her to a hospital and then to a psychiatric hospital at Catawba, Virginia.

I don’t dispute that this may have been necessary. I do dispute being denied the opportunity to see my own mother – Because Corona.

Indefinitely. They – the Health Sicherheitsdeinst – refuse to grant me permission to visit. Not today, not next week. Not next month. Not ever, maybe. Well, not before it’s too late. See the letter posted with this article. 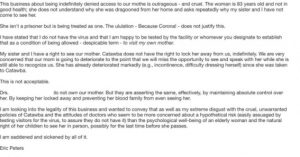 This despite my not having Corona and being willing to confirm this by testing. It does not matter – Because Corona – regardless of facts or humanity. A mindless obeisance to rules established by control freaks who care more about their rules than common decency.

Since her dragooning, my mom has suddenly become incontinent and (apparently) cannot dress herself without assistance. She was fully continent a month ago and required no assistance dressing herself or dealing with her persona hygiene. She is depressed and confused and asks me every time I call her – I am allowed to do that – why I have not come to see her.

I tell her I am trying. She doesn’t know I am forbidden.

My sister wants to fly out from California to see her, too – but is unable to make plans – Because Corona. Because of the arbitrary edicts imposed by arbitrary bureaucrats who’ve somehow acquired absolute power over us.

It is insufferable, infuriating. And incredibly cruel.

Who are these people? Where did they get this dictatorial power?

What gives them the right to separate families? For that matter, to close businesses and house-arrest people without dementia – or sickness of any kind?

Presumptive sickness is become the new tool of terror. Ululating Islamic terrorists having lost their power to terrorize the populace – and enable the terrorizers to assume unlimited power over the populace.

How much longer will we permit ourselves to be terrorized by these people? To concede to them unlimited power to control our lives? To destroy lives? Economically, psychologically – and inevitably, literally.

People are going to starve. They are going to go crazy – by being kenneled like animals and treated like cattle when they are allowed to go out. We cannot get together with our friends. We cannot see our elderly parents in nursing homes and hospitals, some of whom will die in the meanwhile – not Because Corona (the virus) but because of the arbitrary cruelty imposed in the name of the virus.

Why does hypothetical sickness trump the actual lives of millions of people? Why are some old people condemned to a lonely death because of fear they might get sick? Why does that fear – expressed by people who have no skin in the game – trump the human right of elderly people to visit with their own family, perhaps for the last time?

These are hard questions that deserve a better answer than Because Corona. 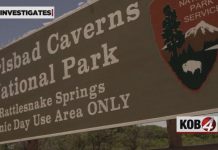 Another Life That Didn’t Matter