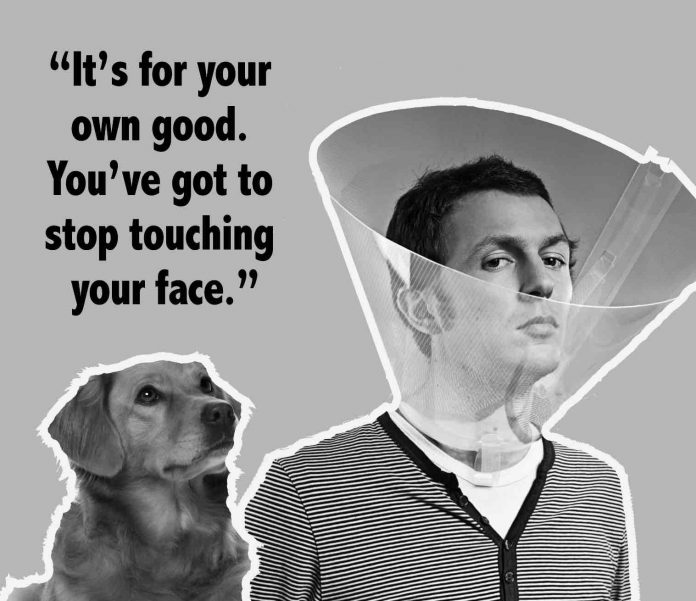 The undiapered aren’t a threat to public health. They are a threat to the power of the Gesundheitsfuhrers, who need to create the image of general sickness in order to maintain the fiction of its reality.

Without which, their power to rule by decree – for the sake of public health – loses its puissance.

But if everyone is diapered up, it looks very scary out there. And very scared people are very easy to herd.

It is noteworthy – or should be – that Face Diapering was hardly “practiced” (the new virtue-signaling verbiage) when it was most rational to do so. Which was three months ago – when no one knew much about the WuFlu other than what the Gesundheitsfuhrers were telling them, which was that millions were going to die.  Not a bad reason to put on a Face Diaper . . .

Hugely questionable counting methods aside – including the counting of practically everyone who has died over the past three months as having died because WuFlu, even if they actually died from old age or a heart attack – has given us a fraction of the number of promised dead. Even the whole number – the total, considered in isolation – is tiny when taken in context of the number of “cases” as well as the number of Americans, which is around 330 million vs. around 120,000 who have supposedly been slumber roomed by it.

The math works out to a fatality rate for the not-old/not-already-sick of less than 1 percent.

Yet the Gesundheitsfuhrers insist that 100 percent wear the diaper (unless of course they’re black, in which case the WuFlu is not dangerous).

In fact, there is a great danger.

It is that the diaperless will make the diapered look – and feel – like the fools they are. When it was only freaks like Michael Jackson and admitted neurotics like the comedian/actor Howie Mandell who were diapered up it was easy enough to tell who had a problem, which wasn’t the rest of us.

If you didn’t want to be regarded as a freak or a neurotic, you didn’t wear as diaper, or cringe in fear of germs or obsess about hand-washing. That aberrant behavior is being conditioned into mainstream acceptance on the basis of necessity, in order to demoralize people, keep them apart – literally – and afraid and suspicious of others.

The reasons for that are obvious – or ought to be.

It’s much easier to control a nation of terrified lepers living in constant fear of death . . . unless they obey the Gesundheitsfuhrers.

Of course it’s possible that a continent 26-year-old might lose control of his bladder (or worse) and – sans diaper – there could be a mess. This actually happens occasionally, too. Sometimes, you just laugh too hard. Or that street food you ate half an hour ago was that bad.

But millions of 26-year-olds don’t wear diapers because .04 percent of them might pee their pants (or worse) and an order that 100 percent of them do so on account of that would be taken – rightly – as both silly and purposefully meant to degrade and demean them.

So why do the same people – with more or less the same risk of being Slumber Roomed by the WuFlu – wear a diaper on their face? 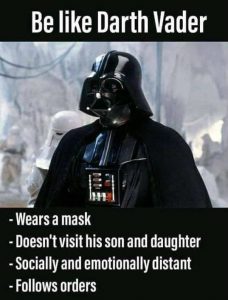 The answer, of course, is because Anderson Cooper and the rest of the Fear Brigade, which informs them on an almost hourly basis of the latest number of “cases” – which they present as synonymous with being Slumber Roomed.

If they presented the same hourly count of diarrhea cases – of which there are millions! A pandemic! – that, too would sound awfully scary and maybe even enough to get them to wear the actual downstairs diapers, too.

The death rate for WufFlu (and diarrhea) they never mention – because it’s not scary.

Which is a real problem for the Gesundheitsfuhrers. Too many people know it isn’t scary – and have therefore taken off the Face Diaper, if they ever put one on in the first place. Their visual manifestation of normalcy, rationality – and most of all, that they are not afraid of WuFlu –  cannot be tolerated because it might encourage others to question the Gesundheitsfuhrers.

Which might result in less and less Face Diapering – until the only ones left still wearing them are a handful of freaks and neurotics.

And that’s not much of an electoral base.

The Fear Ballon must be kept inflated; visible dissent must be effaced – by forcing everyone to put a diaper on their face. 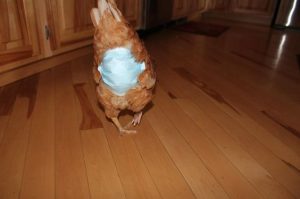 Which is why it is critical to refuse to do it. For the same reason you’d laugh in the face of anyone who demanded you put on a downstairs diaper. For an even more important reason than that.

Which is that the Face Diapering of America is being pushed to turn Americans into a troop of  faceless fools – who will accept much more than a face diaper, if they don’t tell the Gesundheitsfuhrers exactly where to stuff them.