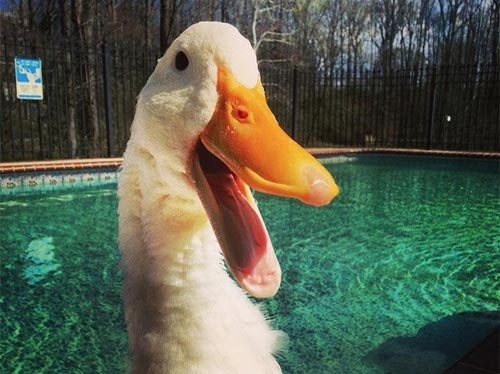 I haven’t posted anything in about a month about the chickens and ducks and thought the time was right to post an update.

One thing I’ve discovered, being new to ducks, is how quickly they grow relative to chickens. At least, these two ducks I got – as ducklings, along with the chicks – at Rural Retreat. They achieved immense size within about six weeks and seem to be fully grown now while the chickens, as you can see, are still pullets.

I am curious whether the ducks will start laying first – and how soon.

I mentioned in one of my last Bird Updates that this go ’round (I’ve had chickens before) I sunk the fence six inches deep in the ground – to keep predators from from burrowing under the fence and into the run and eating the chickens.

I doubled down on the deal by pouring concrete in the trench, which also serves to anchor the fence.

But the main thing I wanted to “hip” everyone to is my field expedient duck pond. As a duck dilettante  I did not really know how to provide the ducks with a place to swim – but knew (from reading) that they need a place to, for psychological and physical reasons. They are, of course, waterfowl – and I think it would be mean to deny the fowl water.

They also – apparently – need a place to dunk their heads, to keep their bills clean and also to wash down their food. But ducks are also dirty birdies – they foul their water quickly. 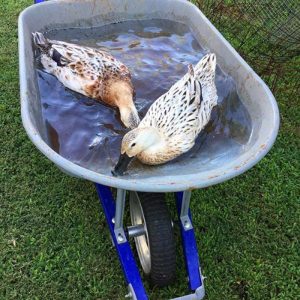 Some people therefore build a swimmin’ hole with a drain  . . . so as to drain the water easily and quickly.

But I needed something quickly – because the the ducks grew so rapidly. While I puzzled over what form the eventual duck pond would take, I decided to work up something that would . . . work

So, I dug a roughly 4x3x2 (deep) square and lined it with a tarp and filled it with water. Presto! Instant – almost – duck pond. It took about an hour to dig – and it only takes about 10 minutes to empty, which I do with a snow shovel.

By “shoveling” out the water. It’s easy and only necessary to do it about once a week or so, depending on whether it rains (if it does, the fresh rainwater replaces much of the mucky water).

I intend to build something more elaborate – larger and with a drain – but for now, this works and that’s what I thought I’d tell you about.

I’d also add that I should be getting at least 3-4 eggs per day from the girls once all seven (plus the two ducks) begin laying – which will likely be toward the early winter. That – by itself – is a steady supply of protein and calories without any Diapering involved.

The more the world goes off the deep end, the more sane it is to be able to provide for oneself and those one cares about. Decentralization is the key to dealing with Diaper Dementia, “peaceful” protests and all the rest of the errata descending ll around us like poisonous rain.

Keep in mind, if you remember it, that scene in the movie Independence Day – the one with Jeff Goldblum’s character watching a countdown on his laptop… the countdown signifying how long the human race had before the aliens began their dirty work.

Cars That Drive Themselves…