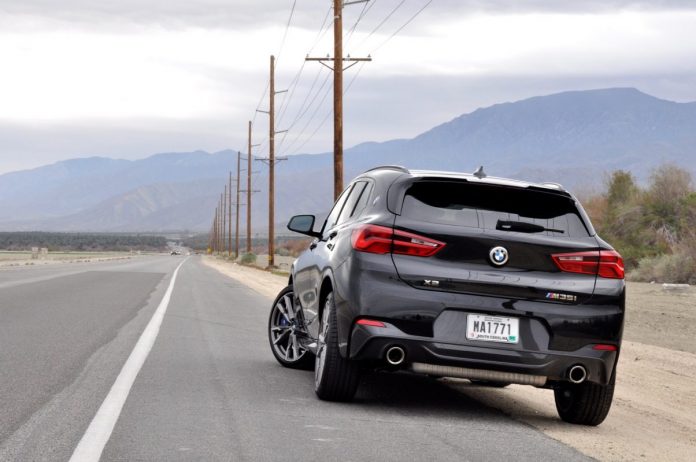 Crossover SUVs are popular because they have everything  . . . except style.

They’re great in bad weather, space-efficient and more versatile than cars. You can fold the seats, fill them with stuff that won’t fit in a car twice the size. That’s why they’re selling so much better than cars. But they suffer from look-alike syndrome, which is a function of their virtues.

Which is why BMW made the X2 look different.

Even though it’s also the same… .

The X2 is a more stylish version of BMW’s X1 – which is BMW’s compact crossover SUV. Which means so is the X2, only with a lowered roofline – and a slightly higher MSRP. 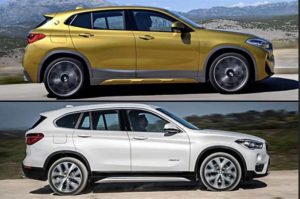 But without costing you too much – in terms of the practical qualities that sell the X1.

Base price is $36,400 for the front-wheel-drive SDrive28i – vs. $35,200 for the same basic thing in an X1 with a taller, more traditionally SUV roofline and little more head (and cargo) room

With a lot less visual impact.

Equipped with the optional xDrive all-wheel-drive system, the X2’s MSRP rises to $38,400. In X1 sheetmetal, the same basic thing stickers for $37,200. 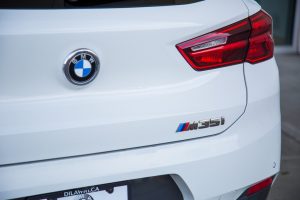 There is also a high-performance version of the X2 – the X2 M35i – which has the practical virtues plus a number of additional ones. Including a 301 horsepower engine, standard AWD, launch  control, massive brakes and massive (20 inch) wheels with high-performance tires to go with.

The main change for 2020 is that both the FWD and AWD versions of the X2 come standard with the almost 9-inch LCD touchscreen that was previously optional.

A much more powerful engine is available.

Some optional equipment – like the available heated steering wheel – is only available as part of a bundled package, with other equipment you may not want. 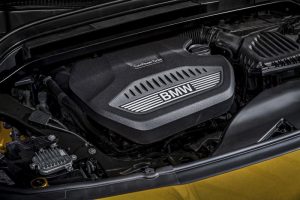 Whether you go with front-wheel-drive or the optional xDrive all-wheel-drive system, the X2 comes standard with the same 2.0 liter turbocharged four cylinder engine, making 228 horsepower and 258 ft.-lbs. of torque at 1,450 RPM.

It’s on the strongest engines available in a small crossover – and arguably the main reason to consider buying a luxury-brand small crossover like this one. Because all of the non-luxury branded ones have many of the same amenities but none come standard with equivalent power and very few even offer an upgrade. 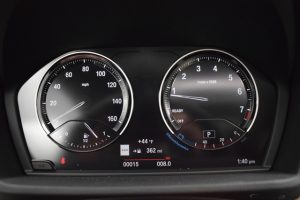 Whether you go with FWD or the optional AWS system, the X2’s engine is paired with an eight-speed automatic transmission.

The same engine and transmission is also standard in the X1.

But the X2 is available with a 301 horsepower version of the 2.0 liter engine – which isn’t available with the X1. Equipped with its optional engine, the X2 is one of the quickest, smallest crossovers on the road. It can get to 60 in just over 4 seconds – vs. around 6 for the X2 (and X1) equipped with the standard 228 hp version of the 2.0 liter four.

But speed costs even more money than style. 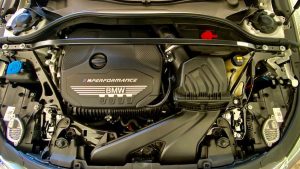 Interestingly, gas mileage is almost exactly the same – whether you go with the standard or the optional engine. Or FWD vs. AWD. The 228 hp version gets 24 city, 31 highway. The 301 horsepower version gets 23 city, 30 highway.

You pay more for the horsepower – but not for the fuel.

Well, in terms of mileage. Both of the X2’s engines do want premium fuel.

The X2 with the standard 2.0 engine drives like the X1 with the same engine – with the big difference being how you look while driving it.

You may have to sit lower – if you’re taller – because the X2’s roofline is considerably lower than the X1’s, which results in considerably less headroom. Three inches less, to be exact (38.9 inches vs. 41.9 inches in the taller-roofed X1). 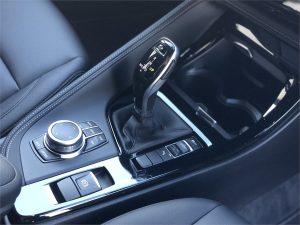 The X2’s seats can be adjusted downward to make more headroom, but this alters the relationship of the driver to the controls, gauges – and sight lines.

The good news is that if you’re not over six feet tall, these are non-issues as there’s still enough headroom in the X2 to not require scrunching down the seat to avoid scraping your head.

The M235i does not drive like the X1. This one’s capable of keeping up with a Hellcat Redeye Widebody, almost. It hasn’t got as much horsepower. But it also hasn’t got as much weight. The M version of the X2 (3,721 lbs.) is carrying around almost 800 lbs. less car than the Challenger Hellcat Redeye  Wideboy (4,492 lbs. – yes, really) which is the equivalent of a fully-dressed cast iron 426 Hemi in its trunk. 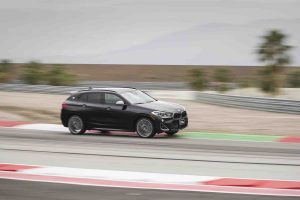 The Redeye is still quicker – because almost 800 horsepower will overcome almost anything. But it’s close. The Dodge is about 1 second ahead of the BMW through the traps. If you’ve ever been to a drag race, you’ll know just how close that is – in terms of how far apart the cars are when they reach the end of the quarter mile.

A handling comparison would be interesting, too. The Challenger is huge in addition to being heavy. It handles quite well for a battleship. And it has the power of 160inch guns to literally launch itself out of the curve once it’s straightened out. But – again – the BMW would likely be right on its ass.

Which means it can also go faster where the Challenger can’t go at all. Eight-hundred horsepower on the grass, via the rear wheels – with 4.5 inches of clearance – isn’t going to go far, either.

Or in the snow.

The X2 has AWD – and almost twice the ground clearance (7.2 inches. the same as the X1).  Granted, the “summer” tires it comes with aren’t going to do much on the grass, either – and forget the snow. 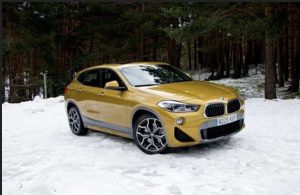 But it’s easier to change tires than add ground clearance or change which wheels are powered.

This thing is an all-weather/all-year performer while the Challenger – love it long time – is a sunny day toy. The rain turns it into a slow car.  Try to drive it fast and all you’ll do is drive sideways; you can’t get traction.

On a wet road, the X2 is probably quicker – despite having 500 fewer horsepower. Because it can apply the horsepower it has. 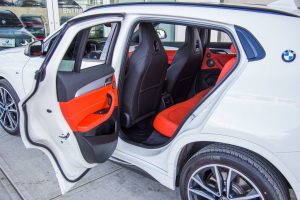 Though they share a platform – and mechanicals – the X2 is also about three inches longer overall (172.2 inches) than its sibling the X1 (175.5 inches) but because of that roof-chop, there’s a bit less room inside for cargo as well as heads.

For a vehicle with a much smaller footprint than a compact sedan such as a Honda Civic – which is 182.7 inches long overall – that is a tremendous amount of space. 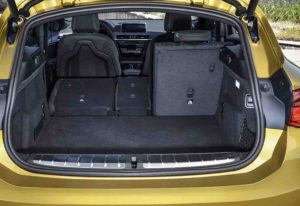 For comparison, the almost half-a-foot longer Civic only has 15.1 cubic feet of total cargo capacity – because that’s all that’ll fit in its trunk.

Which is why cars like the Civic sedan aren’t selling very well anymore.

You also have two more doors than performance coupes like the Challenger, which means you can comfortably carry two or even three more people. Practicality, again – only in a prettier package. 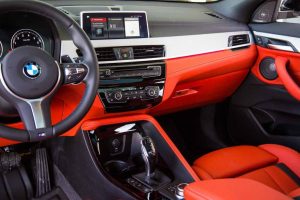 Also available – in all trims – is top-shelf Harman Kardon audio rig with 12 speakers – which means there are speakers on practically every interior surface of this thing. You can also get a Heads Up Display (HUD) however, some amenities that are becoming fairly common as standard equipment in non-luxury models such as heated seats and wireless phone charging are extra.

Also leather seats – which ought to be standard in a luxury-brand model such as this.

BMW – like most automakers – has incorporated automatic stop/start technology into its new cars as a a fuel-saving measure that’s touted as a benefit to the owner. The engine automatically cuts off when the vehicle stops moving and automatically restarts when the driver take his foot off the brake pedal. 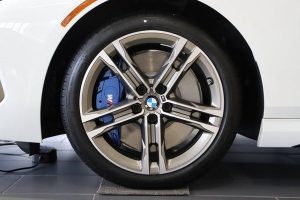 Many people find the system annoying because the stop-starting is noticeable and in stop-and-go-traffic, it can be very noticeable. There’s also not much fuel economy benefit; you may eke out an extra MPG and maybe even two. It’s probably not a trade-off most buyers would make if they had the option not to make it. Unfortunately, automatic stop/start (ASS) is becoming standard in all new cars – not because buyers want it but rather because it helps car companies comply with federal fuel economy mandates. That additional 1-2 MPG increase attributed to ASS is factored over the entire production run of a given model of vehicle, for purposes of determining compliance with the regs.

And that’s why ASS is becoming so hard to avoid.

The good news is there’s an off button. The bad news is you have to remember to turn it off every time you go for a drive. 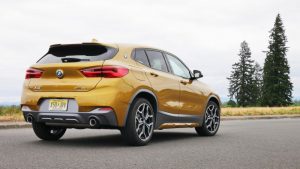 Final – and minor – gripe: While the X2 has tremendous cargo space and generous passenger space – even for the backseaters, which is no small thing given how small this thing is on the outside – storage space for small items is scarce. The center console is very attractively styled by the cubby underneath the cover can’t accommodate much.

The good news is you can toss stuff in the back. The bad news is it’s not readily at hand.

Otherwise similar small crossovers on the market can’t match the performance the X2 offers – and they pretty much all look alike, too.

Do you know that you can get your dream car home with cryptocurrency? Yes, you heard it right, you can now buy a BMW with bitcoin.

What’s It All About? 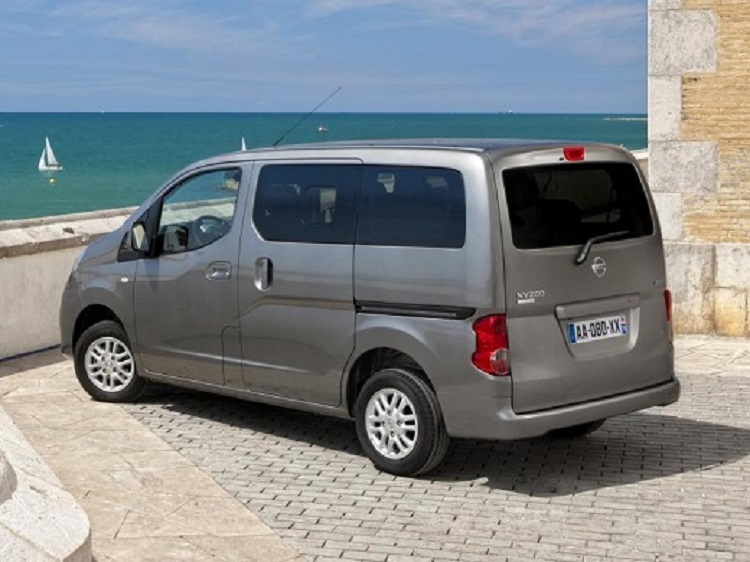