Diapering has become almost universal in many areas despite the absence of medically sound reasons to Diaper. This assertion can be proved by pointing out that a literal Diaper qualifies as a “face covering” – ditto a dirty old bandana and also the medically useless disposable thing they proffer at many stores and which most of the people who’ve submitted to this nonsense walk around with over their faces.

If this were about physical health, then none of those things would be acceptable. They are the equivalent of wearing a traffic cone on your head as defense against meteors or a vial of gypsy tears around your neck, to ward off wizards.

But great pressure is being applied to achieve Universal Diapering, so as to create the impression that Diapering “stopped the spread” – just like an order to not walk on the surface of the sun explains why the soles of people’s feet aren’t singed.

Forcing all to Diaper also makes the ones who like to Diaper look less crazy – because everyone looks crazy. Worse, the handful of people who refuse to dress like crazies are now considered the crazy ones.

One way to not let it be is to ignore the crazies – and their signs.  Practically every business has been forced to pretend they’re abnormal – by posting hysterical signage. But not all businesses are run by abnormals. They cannot say anything Diaper Disputatious but won’t say anything if you behave . . . normally.

My Undiapered dentist, for instance. Got my teeth dealt with, without having to deal with Diaper Dementia. Walked right in, sat right down in the chair. Had a normal interaction with the normal dentist, who said nothing about my acting normally. We both just did – just like people used to. 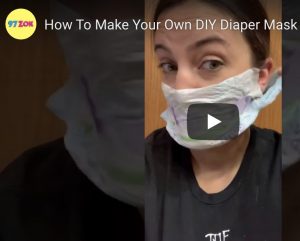 I did the same at Sam’s the other day; then the next day at Kroger. Lots of Diapered People but no hassle about my not being Diapered.

I happen to know several business owners who are sick of pretending everyone is sick; they are not able to tear down the signs pushed on them by the Gesundheitsfuhrers but they also know that no law has been passed deputizing them to enforce Diaper Laws . . . because there are no Diaper Laws. At least not in most of the parts of the country where Diapering has been decreed, which is a different thing. 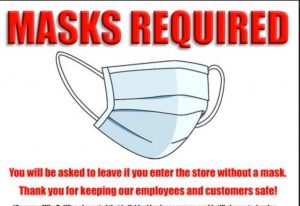 Which – circle complete – they intend to do by keeping everyone Diapered, which perpetuates the image of an emergency. Normalcy is improbable when you can’t see anyone’s face; or rather, when it appears that everyone is terrified of seeing someone’s face.

But it’s a visual Potempkin Village – a facade. Probably half of the people you see Diapered wouldn’t if they didn’t think they had to. Which they do, on account of the deliberately bullying signs pasted on every door to every business for just that purpose.

But a sign has no more power than the willingness of people to obey it.

Walk on in and do your thing, normally – just like people used to do in the antique days of six months ago. You may be pleasantly surprised by the lack of abnormality. At my new dentist’s office, the nice woman at the reception desk clued me in by the visual of her askew Diaper and by the audible of normal conversation. Not a word was said about my showing my face.

This dentist, like more-than-you-might-believe businesses, has decided he is not in the business of enforcing “guidelines” without legal authority. Gesundheitsfuhrers can threaten to fine or even close a business that doesn’t post the Sickness Stalinist signs on their doors but they cannot force the businesses to enforce them, that being the business of law enforcement. And it is still at least technically the case – so to speak – that law enforcement only has lawful authority to enforce laws.

Which require passage by a legislature, composed of legislators accountable via elections to the public.

Gesundheitsfuhrers – and “guidelines” are no such things. And the Gesundheitsfuhrers know it, which they concede by not siccing law enforcement on the undiapered (generally, there have been a few ugly exceptions to this).

The bottom line is that some businesses aren’t Diaper Policing – the signs on their doors notwithstanding. All you have to do to find out which of them aren’t sick (in the head) is walk through the door, showing your face and acting normally.