Resistance to tyranny can take many forms. One form is to abide by the law. As opposed to the orders – styled “guidelines” – issued by Gesundheistfuhrers such as Governor Ralph Northam of Virginia, who have appointed themselves dictators in perpetuity.

And the law is that people who cannot safely wear a Face Diaper (which is everyone, since Diapers are dangerous to everyone’s mental as well as physical health) are not obliged to wear one. Sadly, many businesses have chosen to snuggle up close to the Gesundheitsfuhrer by ignoring the law – in favor of the orders – because they fear the Gesundheitsfuhrer’s wrath.

But not all businesses are such Good Germans.

A few have been bold enough to post signs of their owns – next to the signs about Face Diapers muss sein that the Gesundheitsfuhrers have forced them to post – chiefly as an intimidation tactic, with which most businesses are poltroonishly complicit.

But not this business.

It is a chiropractor’s office that has a different sign on the door – which advises that the Undiapered who venture within will be assumed to have a health reason for not wearing a Diaper – e.g., they’re not sick in the head – and out of respect for the Fourth Amendment (imagine that!) as well as other actual laws pertaining to gesund – and privacy – the practice “will not ask you what your medical condition is and will assume that is why why you are not complying” with the Gesundheitsfuhrer’s “order.” 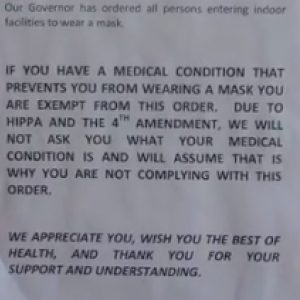 This is how it’s done.

Or at least, one way it’s done.

Abide by the law – especially when it contradicts the “orders” of a power-lusting politicians whose lawful authority to simply issue orders has the ring of Commandant Klink – except it’s not very funny.

Many businesses are of course terrified of not enforcing the Gesundheitsfuhrer’s orders and out poltroonery have become a kind of Gesundheitsfuhrer auxiliary, enforcing what the Gesundheitsfuhrers lack the legal power to enforce. Cops aren’t going to arrest you – outside of places like Miami – for not Diapering because there’s no statute duly passed by a legislature empowering them to do so but businesses – some of them – will attempt to keep you out or throw you out, in order (so they think) to keep the Gesundheitfuhrers off their backs.

Which is as hilarious as it is tragic.

The Gesundheitsfuhrers they are pathetically trying to placate being the very same ones who shut down their businesses at whim – and will again, if their arrogation of unlimited power is not checked.

As by insisting upon respect for the law.

Which a businesses has a legal obligation to do. If it has backbone enough to do so. It is doubtful a business that abides by the law – ADA, HIPPA law, especially – will be subject to enforceable repercussions . . . provided they have the spine to stand up to the Gesundheitsfuhrers‘ hysterical threats. Which will probably not stand up in court, if it gets to that. And if the courts no longer respect the law, then it is no longer our obligation to obey anything the law or Gesundheitsfuhrers decree, either. 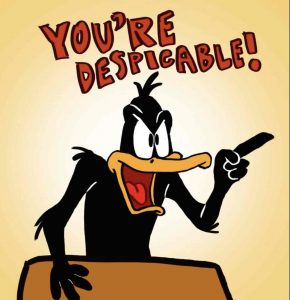 That goes double for “orders.”

This one has the spine – and for that reason, it has my business and more than that, my keyboard and voice and whatever influence I can bring to bear by lauding this business in public and by publicly shaming the businesses which have become virtue-signaling Gesundheitsfuhrer auxiliaries. Like Carl’s, Jr (Hardees, on the East Coast), Sweet Donkey Coffee in Roanoke and Plato’s Closet – also in Roanoke. If you despise collaborationists don’t do business with them. Shun them – as people in liberated France shunned Vichy collaborationists. They are the same type. Willing to throw you under the bus if it will keep them in the good graces of authority.

After imbibing a much-needed dose of sanity, I ventured to Wal-Mart and walked among the not-so-much. Or rather, the submissive. Almost everyone was Diapered – even though Diapering wasn’t being enforced or even asked. No Diaper Dispenser at the door.

And yet, almost all were Diapered – probably because almost everyone was Diapered. The social pressure to Diaper is now as heavy as it once was not to Diaper. Try to remember last year. If you saw someone walking around in public with a Face Diaper on, you probably felt pity as well as wariness. Probably, there is something wrong with that person.

Today, Diaper-wearing has been normalized to such a degree that the sight of an Undiapered is regarded as abnormal. And for just that reason, it is socially difficult for many people to not wear a Diaper as it was just a year ago for most people to wear one.

The training has been working.

When you see an Undiapered today, it is almost axiomatic that you have found an ally in the fight against insanity. There is very little guesswork. Very little risk in approaching a total stranger and saying hello and thank god I’m not the only sane person left in the country! This usually triggers a smile – which you can see – and a conversation, which is a tonic.

I spoke with one very nice Undiapered lady for about 20 minutes; she doesn’t live far away and that is good because here’s another ally and just the sight of us Undiapered standing there – not dying or even sniffling – may have given just that little nudge to some of the Diapered milling about to rethink this business .  ..  just maybe.

I have made several new friends courtesy of Sickness Psychosis – that’s you, CJM! and Greg, too! – than I have lost on account of it. Better friends, I think – because these are people who don’t cave in to fear or do as ordered by CNN.

This is how we win.

I type this, Undiapered, in defiance of the sign in front of Barnes & Noble – which I ignored and walked right by. I could almost hear the sign scream. But no one said a thing.

This is how we win.

By mocking this pathetic clown show, as the mediabear guys have been doing.

By doing our own thing, Undiapered – among the Undiapered – until Diapering is recognized for the pathological training gear it is.

And Diapers are thrown in the trash, where they belong.