Today, a slight break in the faceless vista of the endlessly Diapered at my local Kroger – where for the past week or so everyone in the store except myself was Diapered. The power of signage is tremendous. I have seen its power in action before Sickness Psychosis spread.

You probably have also.

Or – as in the case of this sign – the fact that no law (or “ordnance”) has been passed – ergo the sign carries no power to enforce. And yet, they obey.

Americans weren’t conditioned overnight. It takes a while to transform an eagle into a plucked chicken, ready for the table.

I gave the young guy a thumbs up – and he immediately understood and smiled. It got me through the next 10 minutes of wandering the aisles among the Diapered – and in particular, seeing children Diapered. By their own parents – who ought to be protecting their kids from such mental abuse but who don’t because they are apparently too lazy to look into just how much of a “threat” the WuFlu is to kids.

How many have supposedly died? About 30. Nationally. If that justifies Mass Diapering of every kid, then it certainly justifies encasing every child in an armored chest of some kind, perhaps with wheels, so as to make sure they are not hit by a car on the way in to the store – a threat far more likely to come to pass than being felled by the WuFlu. 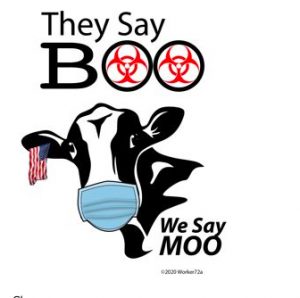 The kids must be taught to Fear – and Obey.

Because their parents do.

Which is all the more reason for them to see at least one Undiapered face – and this time, two others. The third being a young woman with a nice smile – which I could see because she wasn’t Diapered. Perhaps she will smile at the Undiapered young guy and the two will hit it off.

They aren’t afraid – and they didn’t obey. Those are the ones I hope do have kids, because they won’t raise them to be afraid.

Americans used to be like that – before they transitioned from being eagles to plucked chickens.