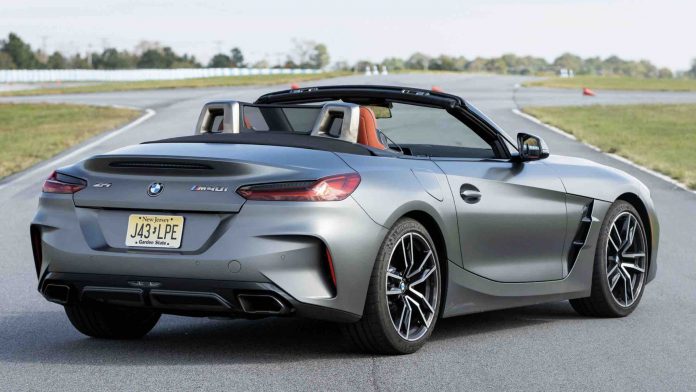 Some things go together like bagels and cream cheese – and sports cars and manual transmissions. As a rule, sports cars used to come standard with manuals – and often didn’t even offer an automatic.

BMW’s Z4 roadster now comes only with an automatic.

Does it still qualify as a sports car?

The Z4 is a two-seat roadster in the same mold as a Mazda Miata – only nicer and much more powerful. 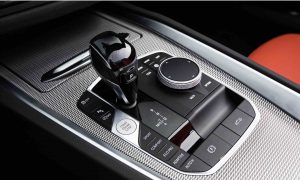 BMW has gone away from manuals as policy. It no longer sells any cars with a third pedal, the argument being that an automatic can be programmed to out-shift a human driver.

Which is true, by the numbers.

But then there are the intangibles.

Base price is $49,700 for the Sdrive30i version – which translates as rear-drive with a 2.0 liter turbocharged four cylinder engine paired with an eight-speed automatic. 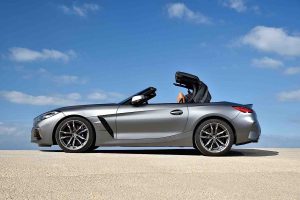 The SdriveM40i – which stickers for $63,700 – is also rear-drive and also comes with an eight speed automatic, but paired with a 3.0 liter straight six, turbocharged to almost 400 hp.

Which is something that isn’t available in a Miata (or the Fiata – the Fiat-badged version of the Miata).

It’s a lot to pay to shift for yourself. 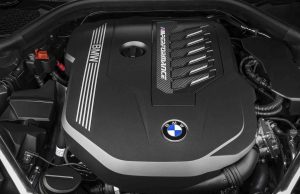 The M40 version of the Z4 – with its more powerful in-line six cylinder engine – joins the lineup for 2020.

The hardtop version of Z4 – with either engine – has been dropped.

Has the handling – and the speed.

Has almost twice the trunk vs. a Miata.

Has the curb appeal of being something you don’t see parked everywhere.

Hasn’t got a manual transmission, even optionally.

Turbo’d four is torquey but not roadster revvy.

You could almost buy two Miatas for the price of one Z4.

One of the Z4’s appeals is that it’s available with either a four or a six cylinder engine. Both are turbocharged engines, which makes them more powerful than the engine (singular) in lower-priced roadsters like the Miata. 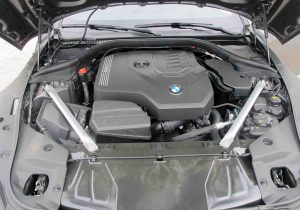 It does, however, come paired with a standard six-speed manual transmission.

If 254 horsepower isn’t enough, you can upgrade to he 3.0 liter six, which is an in-line six, not a V6. In-line sixes are esteemed for their naturally balanced smoothness as well as their natural revvyness. Because there’s no heavy external balancer, the BMW six spins fast as well as high. 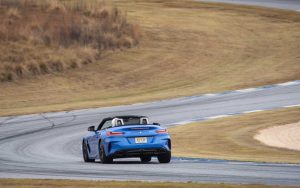 In addition to that, there’s also 382 horsepower and 368 ft.-lbs. of torque at 1,850 RPM – both figures comparing favorably to many current V8 performance engines.

Either way, the Z4 has the power to complement its sports car handling.

With the four, it can get to 60 in about five seconds flat; with the six, that number winnows down to 3.8 seconds.

Few are quicker – including those with V8s. Including the $73k to start Porsche Boxster S.

But you can’t shift for yourself.

You can, however, get more less the same BMW six for a lot less in the Toyota Supra GR.  It’s downrated to 335 hp – and also comes paired only with an automatic.

But it stickers for just under $50k to start. 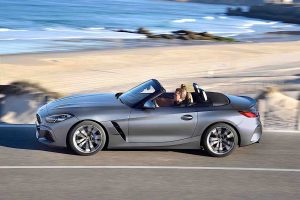 Sports aren’t muscle cars but the Z4 – with the new six – is quicker than almost all of them. And – because it is a sports car – it outhandles them when the road ahead bends.

It’s almost as elemental as riding a motorcycle. With the advantage of being able to put the roof up if it rains.

And it may not even be a detraction, precisely because it’s subjective. It is the standard – and only – eight-speed automatic transmission. It cannot be functionally faulted. It shifts with a precision few humans can match and with a verve few humans could fault. It lets the six spin to its operatic 7,000-plus RPM redline and maybe a little more before delivering a race-worthy upshift to the next gear.  And it holds gears, when that’s important – as in mid-corner, on a downhill stretch. 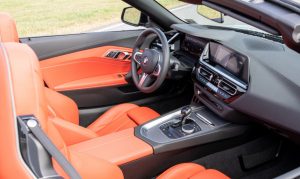 It is doubtful a human could do better – which is BMW’s inarguable argument. The automatic Z4 would likely win a road race (as well as a 0-60 race) against the same car with a manual.

But there is something intangibly desirable about shifting for yourself, even if the automatic does it better and faster.

As fast as the BMW is, the half-as-powerful Miata is more fun to drive – because you’re more involved in the driving. Paddle shifting isn’t the same as actually shifting. Yes, of course you will miss a shift sometimes in a manual-equipped sports car. Or shift too soon – or too late. 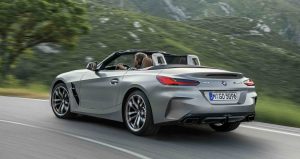 BMW’s mechanistic arguments are inarguable when the race is for money. But when you’re out on the road, other considerations come into play.

The Z4 with the four is perhaps better with the automatic because of its power curve. A high torque engine doesn’t require revving to get you going. And the 2.0 four has almost twice the torque of the Miata’s four – at half the engine speed. It pulls almost like a diesel, an interesting feeling in a two-seat roadster.

And not a bad one, either. 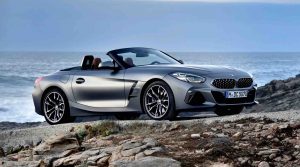 The Z4 has the look of a traditional roadster: long hood/small doors – and what looks like a very small trunk. But it’s actually pretty large – just shy of 10 cubic feet of cargo capacity.

For reference, a Miata’s trunk is holds only 4.6 cubic feet.

The Z4 is also a BMW, of course – and so it comes standard with SensaTec leather seats, a stitched steering wheel, automatic climate control and a 10.25 inch LCD touchscreen. It is luxury roadster.

It is also an uncommon one. 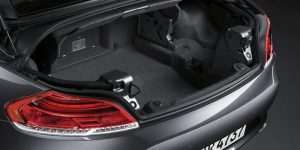 The Miata is a brilliant roadster that almost perfectly captures the spirit of classic British roadsters – with the everyday reliability of a Japanese economy car. Which is why it is so common to see Miatas everywhere. This testifies to the car’s appeal but also detracts from it. If everyone owns one – or it feels as though everyone does – it makes owning one feel almost imitative.

But it does have a targa roof. The peel back top with solid sail panel sides is pretty slick looking and also (for now) pretty uncommon. BMW might give some thought to this. 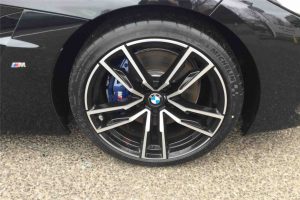 The Z4 is also a high-performance car – and can be ordered with a Track Package that includes high-performance (and blue powder-coated) brake calipers, a limited-slip rear axle and an adaptive suspension system with multiple driver-selectable modes and a lower ride height.

The also-available M Sport Package gets you staggered-size (18×8 up front and 18×9 in the rear) Ferric Grey light-alloy wheels with 40-series run-flat ultra performance tires. These only slightly stiffen up the ride, which is remarkably livable given the car’s intent and capabilities. 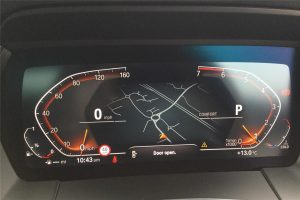 Less traditionally roadster is the trapezoidally themed main gauge cluster, with tach that describes an angular arc that goes right then up then back left.

Of course, a tach is for entertainment purposes mostly in an automatic-equipped car since you can’t miss a shift or over-rev the thing. Like all modern cars, this car has a rev limiter and there’s no worry about mechanically over-revving it since the computer will prevent you from selecting, via the paddles, a too-low gear.

You do, however, still have a shifter – something to grab hold of, at least – and that feels better than turning a knob or pushing a button. Of course, it’s entirely vestigial and drive-by-wire, so you’re not actually physically connected to anything.

But it’s still reminds you of what once was.

It’s a good thing there’s room in the trunk – because there not much room in the cabin. For anything extra.

Like your wallet or purse, for instance. Slivers of map pockets in the door lowers; a dutch-door’d armrest under which is a shallow shelf. Pack light – or pack it in back.

There are enough USB ports for the two people who can be in this car at any given time and AppleCarPlay is standard. WiFi, however, isn’t. It’s extra – and bundled with a $3,050 Premium Package that includes heated seats, a Heads-Up Display (HUD) and wireless charging. 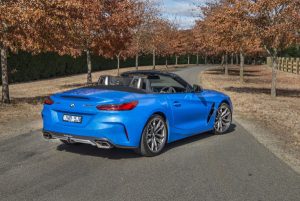 Another extra is paint – if you want your Z4 in other-than-white. The other available colors add $500 to the price.

The good news is that air in the tires is no extra charge.

If you don’t mind the car shifting for itself.