It isn’t just Teslas that have a built-in flambe feature.

Electric cars made by GM and Ford are getting all fired up, too. The National Highway Traffic Safety Administration (NHTSA) has announced it is looking into cases of at least three Chevy Bolts – in this country – that have that auto-immolated, one when it was just sitting (like the Tesla that burned down a garage where it was parked) the other having gotten hot and bothered while tethered to a “fast” (30-45 minute wait) charger.

In the first incident, the Bolt caught fire three times.

The first time, the owner called the firemen, who put out the fire. Well, they thought they had. The flambe resumed a short while later. The firemen returned for a second effort – which they thought had succeeded, again. The crisped carcass was then towed to a Chevy dealership for autopsy.

Where it spontaneously combusted again. 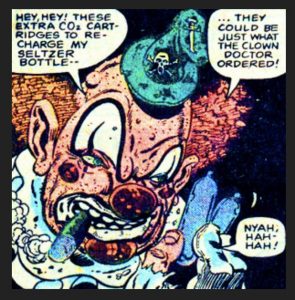 In the second incident, a Bolt began to smoke after its owners left it in the garage to recharge. Firefighters arrived in time to contain the blaze but several nearby homes reportedly had to be evacuated and the car’s owners had to be treated for exposure to toxic fumes from the fire.

Which threatened their lives far more than the WuFlu – and which a Face Diaper offered no protection against. Just as it doesn’t protect from the WuFlu. But Face Diapers and auto-immolating EVs are pushed on the populace regardless.

NHTSA hasn’t yet released details about the third Bolt that burned to a crips and not much is known about the Bolt that melted in the Ukraine – but the problem is well-known because it isn’t specific to the Bolt – or Teslas. It is a general problem with high-voltage electric cars and high-voltage EV “fast” charging.

Gasoline lights on fire if vaporized and exposed to a spark. Batteries can catch fire from thermal runaway – short-circuit overheating caused by a defect off or damage to the battery’s case or internal structure or because of overcharging/too-fast charging. There are supposed to be built-in safeguards as regards the latter, but they’re clearly not entirely safe and as regards the former – it’s inherent.
This inherent risk is magnified by several factors, including deterioration over time of the battery (externally and internally) as well as damage caused by movement. It is one thing to build 1,000 pounds of high voltage/highly reactive battery and place it in a controlled – and stationary – environment. It is another to subject it to pothole jarring, high-speed acceleration/deceleration and other forces that apply strain to its physical and internal structure. And to extreme of heat and cold as well as moisture – the things all cars are subjected to. 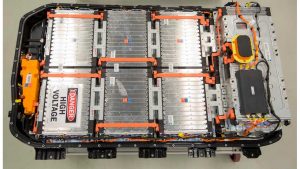 Gasoline is inherently safer. The fuel itself and the tank it is stored in.

The risk of a fire is not increased by sloshing it around, or even by denting the tank, which can stand that and more without any meaningful increase in the risk of a fire.

A leak isn’t much of an issue, either . . . unless there is a spark. Which isn’t essential for a electric car’s battery to catch fire. Which is why wrecking an electric car is inherently more dangerous, since all it takes to get things combusting is physical damage to the battery and that’s inherently more likely because electric car battery packs are usually spread out – to spread their weight – around the entire floorpan of the car.

A hit from any angle can cause damage and trigger the flambe.

A gasoline tank is located in one area of the car – usually the are most protected from impact forces, just ahead of the rear axle. It takes a massive impact to rupture the gas tank and even then – again – there won’t be a fire unless there’s a spark. 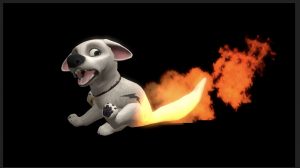 If, on the other hand, an electric car battery’s case is cracked and the materials within short circuit you’ll have something hot on your hands.

Hopefully, you’ll be able to get out in time.

These fires are also hard to extinguish. A gas fire, put out, stays out. Battery fires spontaneously restart (thermal runaway, again). Some wrecking yards have taken to having a gigantic trash bin large enough to accommodate EVs, so they can burn without burning down everything else.

Several questions arise which of course won’t be answered until EVs are successfully crammed down the American gullet. They include the likely – the justified – higher car and home and business insurance premiums that EV owners will pay in consequence of having what the underwriters style a constructive hazard on the premises. 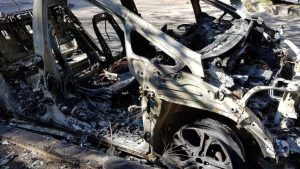 Another question is whether the rest of us will be forced to pay more for this as well, via generally higher premiums for us, even if we don’t have an EV.

Also of interest is the health aspect. EVs are dangerous – and not just to their owners. How about the people next door? How about the car parked next to one?

Perfectly healthy people are harried for not wearing a Face diaper by people terrified of an asserted risk that isn’t actually there. Ownership of actually dangerous electric cars is not only lauded it is subsidized  . . . mandated.

Which goes to show just how little any of this has to do with “safety” – or health, for that matter.