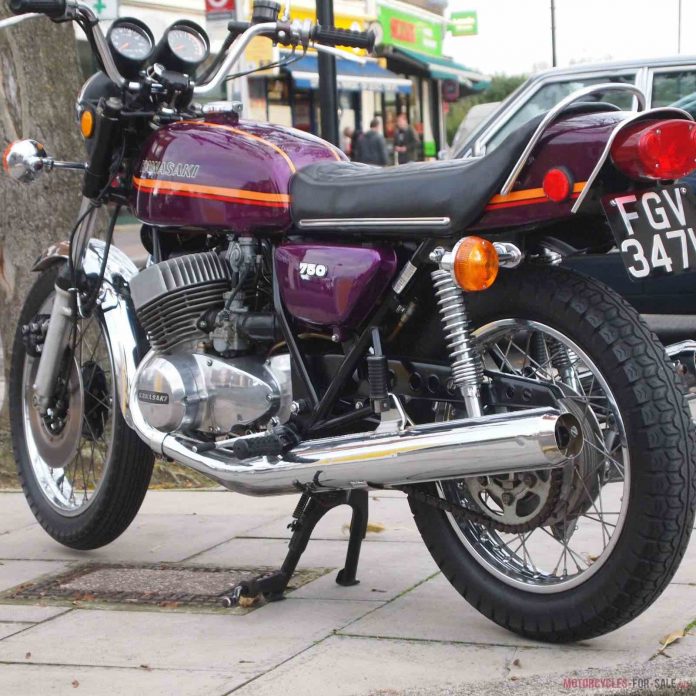 This old Kawasaki motorcycle I’ve got sitting in my office. It has a neat little engine of a type you don’t see anymore – unless you’re in the backyard weed-whacking, that is.

In the late ’60s, Kawasaki cleaned the streets with its fearsome H1 triple, followed later by the even more fearsome H2 – which upped the cc ante to 750 and gave those brave enough to twist the throttle all the way and hold it there low 12 second quarter mile capability. 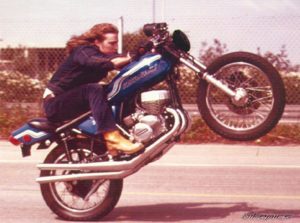 For some perspective, that was almost as quick as a new Corvette – only 50 years ago,  when nothing was even close to that fast that wasn’t a specially-made racer. Hunter Thompson wrote with respectful dread and awe about the Kawi Triple’s capabilities – and of the song of The Sausage Creature its rider might hear as the tach needle bounced past 7,000 and the front wheel rotated skyward like an F4 with both afterburners ripping holes in the sky.

Best of all, these menacing triples were cheap or at least, affordable. For the cost of a few payments on a new Hemi ‘Cuda you could own an H2 – and mop the floor with the ‘Cuda. 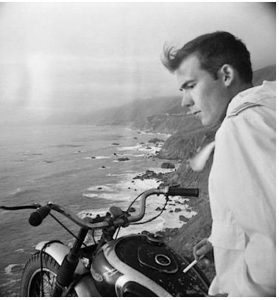 And that was stone stock.

With a set of Denco pipes (remember those, anyone? ) you could pull 120 head-kicking, ball-stomping and totally untamed horsepower out of a 750 cc Kaw triple.

Even today, decades after the last two-stroke triple was uncrated and put out on the showroom floor, they’re still unbeatable. A two-stroke holds the record for the quickest quarter-mile on two wheels: a 7 second pass that makes a Hellcat Redeye like an 80k Pinto with bad compression and two dead cylinders. 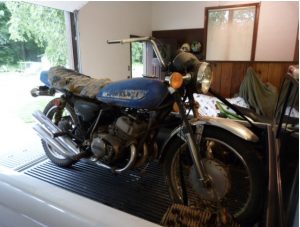 So, as they once said about another King . . .what happened?

I’ll give you a guess and it starts with a “G.”

Two strokes are outlaws, off the reservation, not so much because of their anti-social performance but because of their anti-social exhaust. Two strokes are designed to burn oil on purpose. Many an uninformed victim of an H1 or H2’s bumblebee fury has rolled up on one, seen the blue haze pouring out of those three pipes (two on the right side, one on the left) and thought, easy meat. He’s got a tired engine. I can take him. Only to find himself with a big WTF just happened? expression on his face a fraction of a moment later, after the light goes green – and the Kaw checks out on him.

But, alas, the government is even quicker. Emissions laws felled the Kaw triples – all two strokes, in fact. Or at least, all street-legal ones. There are still two stroke off road/motocross bikes – for the moment. It is the last redoubt of the Engine That Has No Valvetrain. 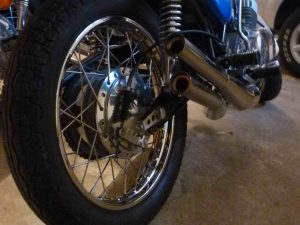 All of which is too damned bad, because, like another oddball engine – the Wankel, or rotary – two strokes are much more efficient at making power than four-strokes. For a given displacement, you can get twice or more the output. Example: I had a single cylinder, but four-stroke, dual-sport motorcycle. It made about 15 hp. Stack that up against the little S1 triple I’ve resurrected. It’s also a 250 cc engine (though three cylinders – the smallest such machine ever mass-produced, in fact) but it makes about twice the power. It’s also much simpler – the cylinder heads are a simple one-piece casting with no holes in them other than the one for the piston. There are no valves to adjust (or seats to recede), no cam chains, pushrods or shims – nothing. Just three pistons riding a common crank, sucking air (and oil) and exploding the mix in a synchronized ballet of mechanical mayhem.

It is a magnificent thing.

Unfortunately, it’s also a highly unlawful thing – for a bike (or car) manufacturer to try to slip into the line today.

So, if you want to experience what it was like to ride an unfettered berserker – and possibly, hear the song of the Sausage Creature – you’ll have to do as I have and rummage in the trunk of history, see if there’s anything there.

If there is, and you dare, it’ll be a moment of clarity – and one you’ll never forget!