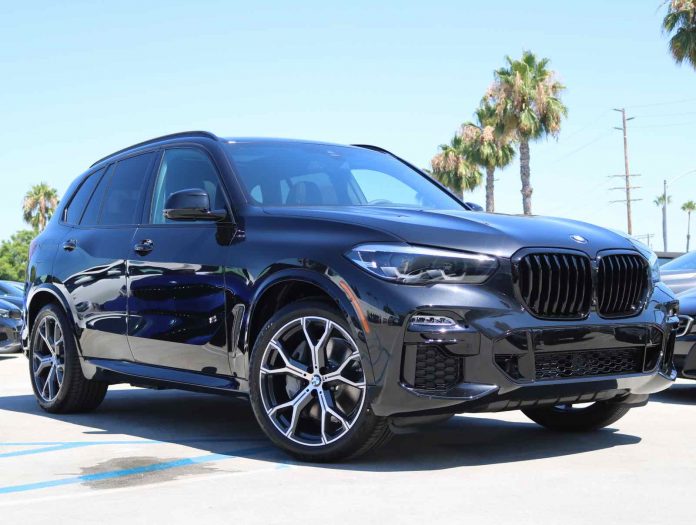 The main problem with electric cars isn’ the range.

Put another way, how far it goes is a less a problem than how long it takes to get going again. A gas-hog that drains its tank dry in 200 miles or less can be back on the road in five minutes or less – which makes its short range not much of a problem. But if you have to wait at least 30-45 minutes for a recharge, then you’ve got a problem.

Assuming you haven’t got the time to waste.

BMW addresses this problem by eliminating the need to wait – unless you want to recharge. While giving you the option to drive as far as 31 miles without burning (or “emitting”) any gas.

The X5 is BMW’s mid-sized crossover. It seats 5-7 in two rows or three rows and – unlike the majority of crossovers – it is not based on a FWD car layout and does not come standard with a turbocharged four cylinder engine.

It is based on BMW’s rear-drive luxury-sport sedan platform, raised up for crossover duty. And unlike others in the class – including its primary cross-shop, the Mercedes-Benz GLE – it comes standard with a six cylinder engine.

And a 7,200 pound tow rating – competitive with many truck-based SUVs.

The xDrive45e version of this crossover comes with the six plus a plug-in hybrid drivetrain that allows full electric car operation without the wait – and with 54 more horsepower. Plus standard xDrive all-wheel-drive.

And a zero-to-60 time in the high fours. 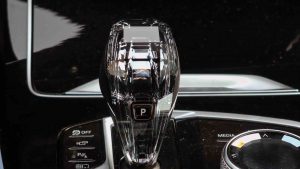 Unfortunately,it is no longer available with a V8.

The xDrive45e is added to the lineup – while the previously available V8-powered xDrive50i has been dropped from the lineup. 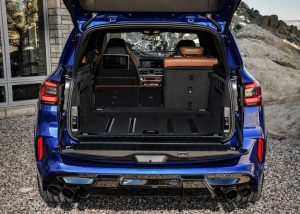 More horsepower from the standard six. Plus the song the six sings.

Pricier than the Benz GLE ($62,500 equipped with its optional six).

You might forget it’s on – if the EV drive is on – and leave it that way, after you park it to go shopping. 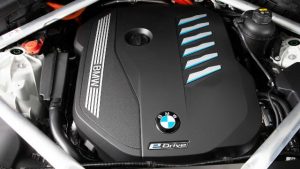 Which is desirable vs. a V6 engine because it is naturally balanced and so naturally smoother. It also revs quicker – because it doesn’t have to heavy counterweights to balance it.

The 3.0 liter turbocharged straight six makes 335 horsepower – unless you opt for the 45e, which adds an electric motor and a battery pack that can be plugged in for a charge or charged as you drive.

If you do opt for this layout, you’ll get another 54 horsepower, for 389 total – plus a swell of 443 ft.-lbs. of torque, sufficient to propel this crossover to 60 in 4.8 seconds while also being capable of going  about 31 miles without burning any gasoline at all.

There’s no wait to recharge, unless you have the time – because this BMW can revert to burning gas when the charge runs low. And because it can operate on either electricity or gas, it has a range of more than 500 miles on the highway – much farther than any electric-only car. 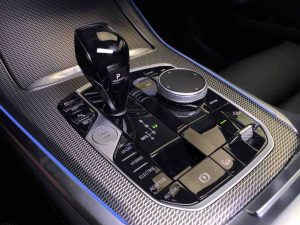 It’s a neat solution to a big problem – and a relatively cost-free one, too.

The xDrive45e’s asking price is only $3,700 higher than the price of the non-hybrid X5 (with xDrive four-wheel-drive) and it includes the horsepower upgrade in addition to the range upgrade and the option to toggle from gas to electric without having to sweat the wait.

An eight speed automatic transmission is standard, as well as 8.3 inches of ground clearance and a very stout 7,200 pounds of standard towing capacity.

Most front-wheel-drive car-based crossovers max out around 5,000 pounds and some are only rated to pull a paltry 3,500 pounds.

The X5’s most immediate rival, the Benz GLE, used to come standard with a V6. It now comes standard with a 2.0 liter turbocharged four that makes a measly (for this kind of money) 255 horsepower and can only pull a comparatively puny 6,000 pounds. 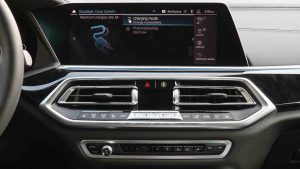 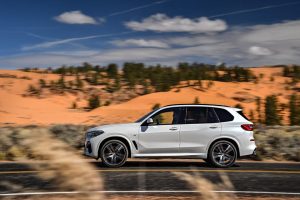 M&Ms – the candy – were developed to solve the problem of chocolate rations melting in the hands of soldiers. This BMW’s electric-when-you-want-it, not-having-to-wait-for-electricity when you don’t want to amounts to the same idea.

It’s a much better idea than the purely electric cars being aggressively pushed by the government officials who don’t have to deal with the problem of the wait – or the cost – since most of the high government officials pushing the purely electric car are themselves being driven around in purely gas-engined SUVs and they never have to worry about the wait – or the cost – which is no object when you have a mainline into the pockets of taxpayers.

For us, a system such as this makes great sense. Also for “the environment,” assuming that’s really the point behind all of this. 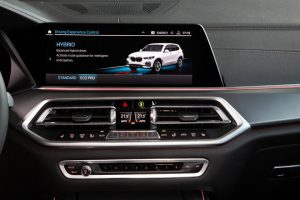 If electric cars are necessary because of “greenhouse gas emissions” then surely an electric car that is capable of handling most daily drives without without burning any – or very little – gas – is just what ought to be favored.

Because it works – unlike the purely electric car, which may be very quick 0-60 but which is also very slow to be zero to anything when its battery is wilted. This – extrapolated to possibly millions of EVs – will bring mobility to a halt in this country. Or at least, gimp it severely.

Very few people are going to willingly sign up for it – not because they don’t like electric cars. Because they cannot afford to wait.

This is why, despite the media selling a story of EV inevitability – EVs only amount to about 1 percent of the vehicles on the road and that not number isn’t likely to increase unless the wait (and the cost) problems can be handled. 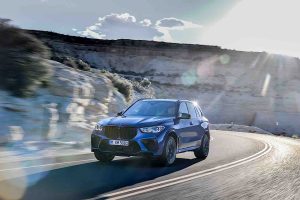 This one does, both.

As regards the latter – cost – the $3,700 extra the 45e will set you back vs. the non-hybrid version of the X5 could be recovered within 2-3 years if you use this thing primarily for commuting during the week and operate mostly in electric mode. When you get home, plug it in – the battery is full again after about 5 hours (on 240 volts, a dryer-type outlet).

There is also a savings – of the magnificent inline six and engines like it, which are being targeted for termination by the government apparatchiks pushing the purely electric car.

This is grossly unnecessary as well as an kind of aesthetic crime. 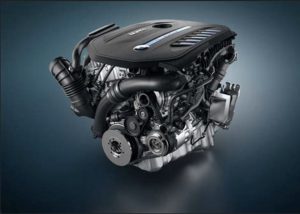 No rational argument can be made that it is necessary to get rid of combustion engines that “emit” practically zero emissions when they are running and zero emissions – including those of carbon dioxide – when they are not running at all. Those who so argue are either operating from a standpoint of ignorance or malevolence.

And why would anyone who appreciates fine machinery want to get rid of engines like this BMW’s six that have an emotional appeal no electric motor will ever have? You can salve your worries about the climate changing and salve your soul – with your right foot. The instant torque of the electric motor plus the sound of that six, the engine – and the exhaust – as the X5 bullets forward at what is very much ludicrous speed, without the ludicrous wait.

It can also go seriously off-road and not just because it has 8.3 inches of clearance and a very stout AWD system. It won’t leave you waiting for someone to haul in a battery charger – or haul you out – if the electric range runs dry.

There is only one downside to this rig. If you aren’t paying attention, you might just leave it on when you leave it parked. Everything is electronic – including the pushbutton for Park as well as the pushbutton to turn the engine off. But if it is already off – because electric mode is on – you might forget to push the button or think you did.

This BMW has, of course, a bevy of “safety assistance” technology, including lane keep assist and automated emergency braking. But BMW has set them up to be much less needling than is the case in many other current vehicles, which practically beat you over the head with a frying pan if you don’t immediately put on your seatbelt or a tire touches the painted line in the road.

Also, the hybrid drive setup eliminates the annoying automated stop-start engine cycling that almost all new vehicles – including high-end vehicles – are afflicted with.

This makes driving the X5 far less enervating – which makes it much more enjoyable. 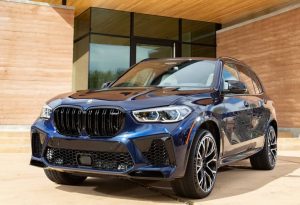 The X5 has always looked more rugged – more like an SUV – than the typical crossover and this remains part of its appeal today.

The upper liftgate opens up like the typical crossover liftgate; but there is also a lower tailgate that fold down – and out – providing both access and a ledge that can be used as a place to sit, if you like – as for tailgate parties.

It also gives you more room to open the upper section to access the cargo area in a tight spot. 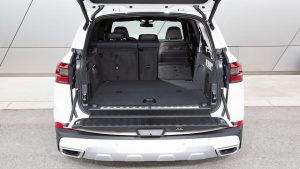 Less appealing – if you need the extra seats – is that the 45e doesn’t offer the third row that is available in other X5 trims. The reason for that being space taken up (under the floor) by the electric motor/battery pack.

But this won’t be an issue if you don’t need the extra seats. And you will probably find it very appealing that BMW doesn’t “bundle” desirable amenities with the optional xDrive AWD system – or with the 45e’s hybrid system.

Both the base Sdrive40 (rear-drive) and the xDrive40 (AWD) have the same standard amenities – including a full-roof panorama sunroof, an adaptive suspension, heated seats, wireless charger – and are eligible for the same options, including the available massaging seats, heated steering wheel and armrests, M Sport trim (including 20-inch wheels) and upgraded brakes, an excellent 14-speaker Harman Kardon audio rig and a panorama roof with embedded LED mood lighting. 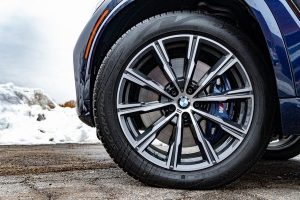 The 45e hybrid comes with all the same, with the main extra being the ability to roll without burning (or emitting) gas – and the plug-in power cord to juice up whenever you can afford to wait.

Or just don’t mind the wait.

Like many high-end cars, the X5 has some high-tech razzle-dazzle, including what BMW styles gesture control – which means you can use gestures (such as a twirling your finger to the right) to increase the volume of the stereo and decrease it by twirling in the opposite direction.

This is amusing to razzle-dazzle your friends and family with but the knob BMW provides to turn the radio volume up or down works faster. 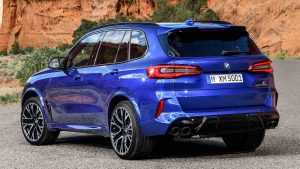 If you have a radar detector, you will appreciate the 12V power point BMW includes – and doesn’t hide in an awkward place, as is a problem in other vehicles, if they even have a 12V power point.

It is sad to see the V8-powered M50i sent off to the glue factory – for the sin of using (and emitting) too much gas. But the xDrive45e almost replicates its performance, with much greater range.

And without sending the six to the glue factory.