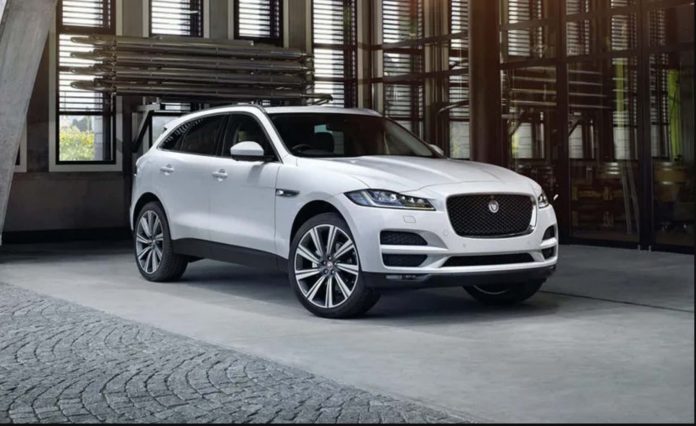 Jaguars were famous, once, for their silky in-line sixes and V12s – as well as their uniquely elegant English styling. Nothing else looks like Westminster Abbey.

And nothing else looked like an E-Type or XJS, either.

So how to retain the Jaguarness without the looks?

The F-Pace is a compact-sized, five-passenger crossover SUV that competes with other small – and sporty – prestige-brand crossover SUVs like the BMW X3, Mercedes-Benz GLC, Infiniti QX50 and Audi Q3.

It comes standard with all-wheel-drive, regardless of engine – and it offers a uniquely electrically supercharged in-line six cylinder engine, paired with a 48 volt mild hybrid system. 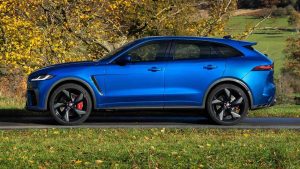 You can also get it with a V8 engine – something almost none of its rivals – except the Benz GLC – offer. However, the cost of that engine is roughly twice the cost of the as-it-comes F-Pace, with a turbocharged four cylinder engine.

With the new electrically-compressed six, the price rises to $59,395. 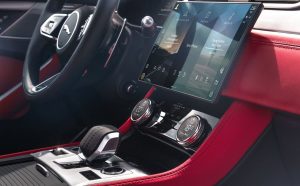 The previously optional mechanically supercharged V6 has been replaced by a turbo-electrically compressed in-line six, paired with a 48 volt mild hybrid system designed to cycle the gas engine off and on – not so much to increase gas mileage but to decrease the amount of C02 gas emitted, which has become as much an issue for car companies to deal with as complying with gas mileage mandates.

The price of the updated F-Pace also goes up. A lot.

It’s down on power, too.

Better in the snow than a classic E-Type or XJ.

Leaper on the horn button still has Jaguarness.

A Jaguar crossover is a weird animal.

V8 is only available if you can afford it.

Others in the class like the BMW X3 and Benz GLC cost thousands less. 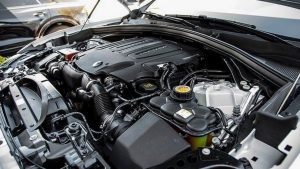 The F-Pace one ups most of the others – except the Benz GLC – by offering three engine options rathe than the usual two.

The standard engine is a 2.0 liter turbocharged four that makes 246 horsepower; it is paired with an eight speed automatic and standard all-wheel-drive – which makes up some for the Jag’s higher-to-start MSRP vs. rivals like the X3 and GLC that offer AWD as an extra-cost option.

Unless, of course, you don’t want AWD and would rather not pay for it.

Equipped with its standard engine, the F-Pace takes 6.9 seconds to get to 60 – a couple of ticks behind the pace set by rivals like the BMW X3, which can make the sprint in 6.2 seconds.

Gas mileage with the four is 22 city, 27 highway

Another standard is 8.4 inches of clearance – about twice that of an old E-Type or XJ. 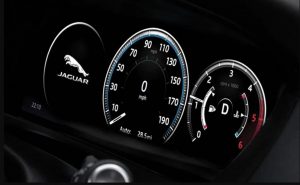 The second available engine is a new combination 3.0 liter turbocharged/electrically compressed straight six, paired with a 48 volt mild-hybrid setup that allows the gas engine to be regularly cycled off and back on without noticeable transitions.

There are also two versions of this combination.

One makes 335 horsepower; the other bumps that up to 395 horsepower. The first will get  an F-Pace to 60 in 5.8 seconds; the higher-output version reduces that to 5.1 seconds.

As with the four, an eight speed automatic and AWD are paired with this engine as well.

MPG info wasn’t available when this review was written but is expected to uptick by about 3 MPG overall vs. the previous V6’s 18 city, 23 highway.

The third engine is a 5 liter V8, with a mechanical supercharger. It makes 550 horsepower – enough to get this Jaguar to 60 in 4 seconds or less.

It rates 16 city, 21 highway – slightly better on the highway than the old V6. 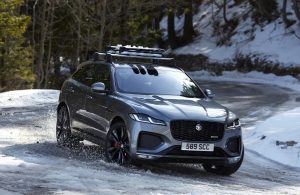 Jaguar has tried to infuse some Jaguarness into the F-Pace by resurrecting the in-line six, which once defined the brand – along with the V12s that won’t be coming back – and by making it quiet, via the electrically-assisted mild-hybrid system that’s bolted to it.

This system has the great virtue of eliminating the obnoxiously noticeable stop-start cycling that is common in cars that have stop-start systems, which is practically all of them of now. Which they do as a way to increase (slightly) gas mileage and decrease (also slightly) the “emissions” – as they are now styled – of carbon dioxide, the non-reactive gas that doesn’t cause smog or breathing problems but which some believe “change” the “climate.”

But people who pay Jaguar money aren’t enthused about the paint-shaker effect of stop-start “technology” – as it’s advertised. The best solution would be to nix the system altogether, especially since the gas saved by all that stopping and starting is less than 1 MPG overall, on average – and these “savings” are likely washed away by more often replacement of the over-taxed starter battery (and possibly the  starter motor as well). 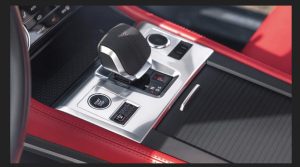 Not to mention the obnoxiousness of the engine noticeably shutting down at every light and pause in traffic – and then noticeably restarting again.

The news system makes these transitions seamless. Unless you are focused on it – and really looking for it – as by looking at the tachometer – you will probably not be conscious of the engine going to sleep and then waking up. The 48 volt electrical system is four times as powerful as the usual 12 volt system and it directly spins the engine’s flywheel for almost-immediate as well as very quiet restarts.

The big downside, of course, is the cost of the system – reflected in the uptick in the F-Pace’s MSRP, including the MSRP of the standard engine-equipped F-Pace, which doesn’t have the 48 volt/mild hybrid system. 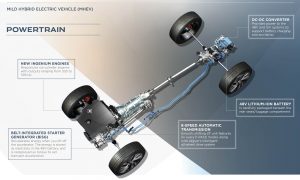 And not just in terms of what it costs.

There is also what has been lost.

There may be some gas savings – but given the type of vehicle we’re talking about, does it matter, unless spectacular? Official numbers for the ’21 F-Pace with the new straight six/mild-hybrid setup weren’t available when this review was written in early April but are not likely to be be much different from the 18 city, 23 highway posted by the ’20 F-Pace with the supercharged-only V6. 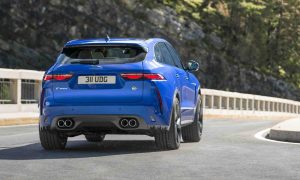 It might be a 3-ish or so MPG difference. Which is not much of a meaningful difference when the power is down – and the price is up, by several thousand dollars.

But then, it “changes” the “climate” less – if you buy that. And if you do, perhaps the cost is worth the expense.

The most Jaguar-ish version of the F-Pace is the V8-powered SVR – which I was able to savor last year. It may be jacked-up off the ground by twice as much as an old E-Type or XJR, but it is absolutely worthy of the leaper on the steering wheel horn button – which is one of the few relics of Jaguarness still remaining in new Jaguars. Almost none of which are saloons or coupes anymore.

Of course, there are other extremely quick super-crossovers available, including the AMG (and V8) version of the Benz GLC. The Porsche Macan, too.

But while quickness isn’t a problem, distinctiveness is. 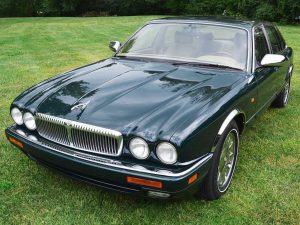 Once upon a time, nothing else looked like a Jag.

It was among the main reasons for buying a Jag. It wasn’t like a Mercedes or a BMW. It was an alternative to them. As or even more luxurious, of course – but with a Savile Row style all it own.

Jaguars have less of that now – in part because it is difficult to make a crossover that doesn’t look pretty much like every other crossover. How do you make a circle look like a square?

The layout defines the look.

And so the F-Pace, while not stylistically objectionable in any way – isn’t stylistically exceptional. As the Jaguars of the past – like the E-Type and XJs of the classic era were. Those cars were the stuff of wall (and garage) art; sculpture you could drive. 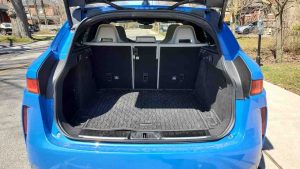 But the F-Pace is a great deal more practical, because of the layout. A mid-’90s Jaguar XJ sedan had a 12 cubic foot trunk, which is tiny relative to the size of an XJ – which was a full-size sedan, comparable to a Mercedes S-Class or BMW 7 of the same era.

The smaller-overall F-Pace (which was about the same footprint a current-year compact sedan) has 31.5 cubic feet of storage space behind its second row and with them folded, the load capacity increases to 69.1 cubic feet, almost six times the available space in the classic XJ sedan’s trunk.

It makes the F-Pace far more viable for carrying a bunch of kids and their stuff – especially in the era of child saaaaaaaaaaaaafety seats and all that cal. In the Olden Days – before the ’90s – you could pile in as many kids as would fit inside an XJ sedan and not have to sweat a Hut! Hut! Hut! Today, only two kids can ride in the backseat, strapped into their seats. 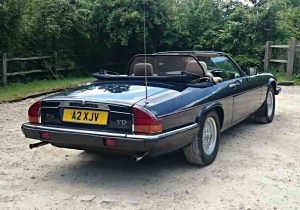 That plus the old Jag saloons – as the Brits style sedans – and coupes like the XJ-S were terrible in the snow, being rear-drive and low to the ground – making them beautiful, impractical things.

The F-Pace is very practical; just not beautiful in the way Jaguars once were.

The F-Pace’s new 11.4 inch touchscreen isn’t flat, which adds a touch of uniqueness to this Jaguar – though it is a truism that technology is fleeting and what is (and looks) “high tech” today may look cheesy or at least, dated, by ten years from now. 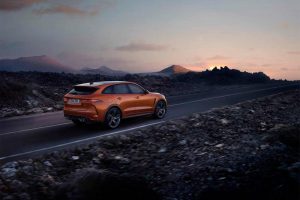 By which time, incidentally, Jaguar and Land Rover (the same company) have stated they will no longer be making anything other than entirely electric vehicles.

This means that models like the current F-Pace are the last of their type and – absent the inline six engines – it is even harder to see how Jaguar maintains its uniqueness.

Is it a Jaguar? Or just another crossover  . . . with some lingering Jaguarness?