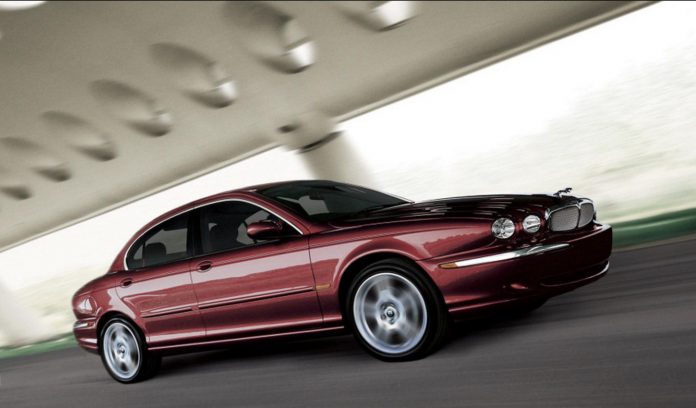 American car companies – GM and Ford especially – get heckled a lot and justly for repackaging their economy cars and trying to sell the lipstick-on-a-pig’d result as luxury cars. Examples of this include the infamous “Cadillac” Cimarron – which was a Chevy Cavalier affixed with the wreath and crest – and a twice-as-much price tag. It was a manifestation of blatant contempt for the Cadillac buyer – and for the legacy of Cadillac – that GM never recovered from.

Neither has Jaguar – which tried the same thing in the early 2000s, with the interesting difference that it tried to re-sell another car company’s economy car as its own car. 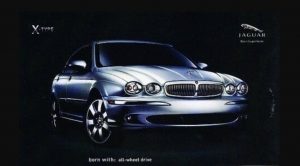 This was the ill-starred X-Type.

It was conceived as a not-necessarily-bad-idea. Jaguar – Britain’s well-known luxury sedan brand – observed Mercedes-Benz and BMW expanding their market base by offering smaller, entry-level models like the 3 Series (BMW) and the Mercedes 190 Class (later rechristened C-Class), which were priced within range of people not yet able to afford a traditional – and traditionally expensive – BMW or Mercedes. But who – it was expected – would be able to afford one, eventually. In the meanwhile, bring them into the fold with a BMW or Benz they could afford, right now.

With the key point being a BMW – or a Mercedes – they could afford. 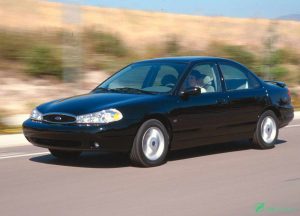 They may not have been thoroughbreds, but they weren’t bred elsewhere.

And that was Jaguar’s mistake.

Though – to be fair – it wasn’t actually Jaguar’s mistake.

When the X-Type was conceived, Jaguar was the property of Ford, which had acquired Britain’s then-struggling luxury car brand and subsumed it under the umbrella of what was styled the Premier Automotive Group, or PAG – which also included Aston Martin and even Volvo, believe it or not. Ford – under the leadership of CEO Jacques Nasser – spent a reported $17 billion to acquire these brands, which it hoped would allow it to leverage economies of scale as well as common/shared platforms to both lower costs and increase profits. 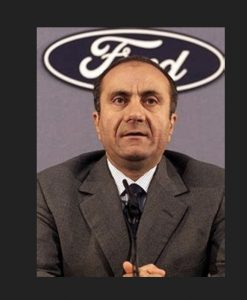 It worked a lot like GM’s divisional branding structure in the latter days, when the once largely independent divisions that had previously had their own engine shops – such as Pontiac, Buick and Oldsmobile – were shorn of them and reduced to re-sellers of generic “GM” platforms, differentiated by badge and price but largely identical, mechanically. It is arguably why there no longer is a Pontiac or Oldsmobile division – and Buick lingers chiefly because of the badge’s unfathomable popularity among the Chinese.

It was decided – by Ford corporate – that the Jaguar brand needed a new small car. Something to compete with the small cars being sold in numbers by BMW and Mercedes. Bur rather than give Jaguar the means to design its own small car – as BMW and Mercedes designed small cars of their own – it was decided to re-sell a small Ford as a “Jaguar” – and hope no one noticed.

The re-badged, re-branded small car was Ford’s Contour sedan – which was itself a rebadged/re-sold version of the Mondeo sedan sold by Ford in Europe. It was not a bad car; there was even a high-performance SVT version with snappy V6/manual transmission that emulated the very successful Taurus SHO sedan that Ford sold a bunch of in the late ’80s and early ‘90s. That one was equipped with a high-revving Yamaha-sourced DOHC V6 and did a lot to buck up both the reputation of Ford as well as the appeal of the Taurus, which prior to getting the SHO (Super High Output) treatment was best known for being a solid family car and a staple of rental car fleets. 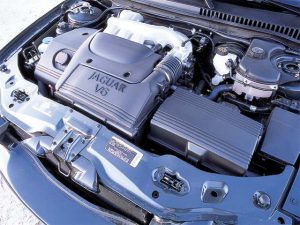 But that street only goes one way.

It is one thing to make a Ford more appealing by infusing it with an interesting engine. It is another thing to try to make a Jaguar out of a Ford.

Under the styling direction of Simon Butterworth and Wayne Burgess, the Mondeo/Contour was re-skinned to look like a smaller-scale XJ Series sedan. It ended up looking pretty good. It even had the traditional Jaguar “leaper” hood ornament.

But under the skin – and under its hood – it was all Ford. 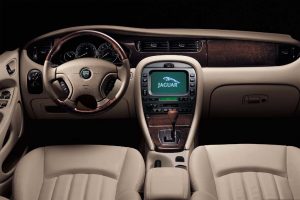 There was no Jaguar in-line six, let alone a V12. There was Ford’s Duratec 2.5 liter V6, same as in the Mondeo-Contour but fitted with a “Jaguar” engine cover. It was also mounted sideways – transversely – because the Mondeo-Counter was a front-wheel-drive car, as most economy cars are. The problem there – for Jaguar – was that luxury cars generally weren’t. At least, not the real ones. The ones actually made by other luxury car brands, like BMW and Mercedes.

The “Cadillac” Cimarron was front-wheel-drive, because it was a Cavalier under its skin. The BMW 3 and the Benz 190/C-class were based on rear-drive layouts, which separated them from FWD economy cars like the Cavalier/Cimarron. FWD is advantageous in an economy cars because it reduces manufacturing costs. There are fewer components – the rear axle as a separate assembly is eliminated in favor of a combined transmission/axle assembly called a transaxle that is mounted directly to the engine in a much more compact package that is easier to fit under the hood and inside the smaller engine compartment of small economy cars. 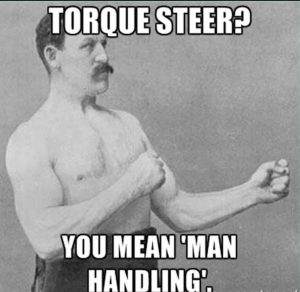 It also offers better traction in poor weather than the rear-drive layout because the car pulls itself along rather than pushing itself forward. But there are several serious downsides – if you’re trying to build a luxury car. The first is weight imbalance. With most of the drivetrain’s weight over the front wheels, a FWD car tends to be front-heavy, which inclines toward understeer when the car is driven fast. There is also the problem of torque steer – which arises when the drive wheels spin and hop (under load) while the driver is trying to steer.

Finally, there is the intangible downside of FWD being associated with less-prestigious cars. High-end cars being almost exclusively rear-drive cars – at that time, at least.

Jaguar – well, Ford – figured it could hide the X-Type’s Mondeo-Contour kinship by adding all-wheel-drive to the mix. This would serve the dual purpose of establishing mechanical separation between the X-Type and Mondeo-Contour, which were front-drive-only – and give the X-Type something actual Jaguars of the time did not even offer. 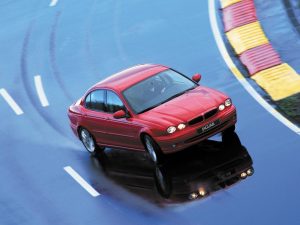 The X-Type’s standard AWD system also addressed the problem of torque steer, which arises as a result of expecting the wheels that propel the car to also steer the car. It is a problem in powerful front-drive cars, especially – or was, at the time – before the development of sufficiently sophisticated electronic controls capable of discreetly modulating the FWD car’s tendency to jerk left (and wheel hop) under hard acceleration, forcing the driver to countersteer the car to keep it going in a straight line. By diverting some of the engine’s power to the rear wheels when the front wheels begin to break traction, that problem is solved.

But the underlying – the under the hood – problem remained.

There was nothing objectionable about the Ford 2.5 liter Duratec V6 engine. Unlike the awful Cavalier-sourced four cylinder engine used in the “Cadillac” Cimarron, which was just as prone to head gasket failure under the hood of a Cimarron as it was under the hood of a Cavalier. It was essentially a sound engine and it also made 194 horsepower, a respectable (and competitive) number for an entry-luxury sedan in the early 2000s. It compared well – by the numbers – with the ’02 BMW 3 Series’ standard 2.5 liter in-line six, which only rated 184 horsepower and the ’02 Mercedes-Benz C-Class’ 2.3 liter four cylinder engine, which made 192 horsepower. 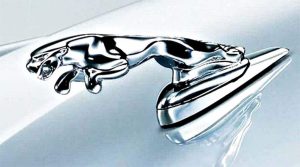 At the time, neither the BMW nor the Benz was available with AWD, either.

But prestige is as much an intangible as an objective. It is why, no matter how quick a Corvette is – or even if it is quicker than a Ferrari – it will never be in the same class as a Ferrari. It is also why the X-Type was unable to convince many buyers to pay Jaguar money – $29,950 in 2002, the first year of availability – for an all-wheel-drive Mondeo-Contour, notwithstanding the leaper hood ornament and some real wood trim inside.

That sum – about $46,000 in 2021 dollars – amounted to nearly twice the cost of a Mondeo-Contour equipped with the same basic engine (though sans the AWD and wood veneer). When you pay that kind of money, you expect more than a Ford under the hood. Or at least, most people expect it. 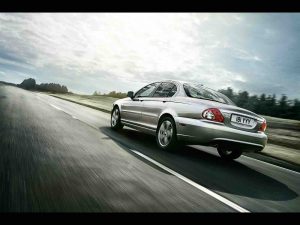 The X-Type did offer another engine – a 3.0 liter V6 that made 231 horsepower, which was much more horsepower than you could get in a Mondeo-Contour. But the same problem remained and – worse – could not be hidden. The car was still a reskinned Mondeo-Contour with AWD, meant to obscure its lowly FWD economy car underpinnings.

There is a an assumption that the car press will not raise the hood – or compare the specs – and thus, the potential buyer will be unaware that he is being asked to spend twice as much for the same Ford, wrapped more nicely, perhaps. This is a breathtaking leap of effrontery, when you consider that – as a rule – people in a position to spend nearly $50k on a car are usually not stupid people. Arguably, the stupid people are those who drag the honor of a formerly prestigious brand like Jaguar (or Cadillac) through the muck for the sake of making a fast – so they hoped – buck.

It did not pan out that way, for either.

Ford had hoped to sell at least 100,000 rebadged Mondeo-Contours annually, apparently to Jaguar buyers not savvy enough to realize they were paying double for a reskinned Ford. Instead, Ford offloaded about 350,000 over the course of the car’s eight-year production run. This works out to about 45,000 cars annually, just shy of half the hoped-for volume.

As the Cimarron did for Cadillac, the X-Type did for Jaguar. Neither brand recovered the prestige it lost by going the cheap and easy, rather than doing it right – as BMW and Mercedes did, with their mass-market small cars. Which continue to be successful cars, more than a decade after the last X-Type was stamped out.