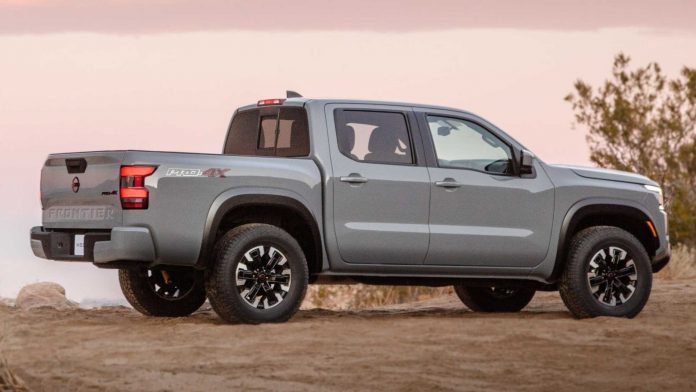 Ready for the bad?

There’s no option to buy a less expensive four, which the previous Frontier used to come standard with – along with a much lower base price. 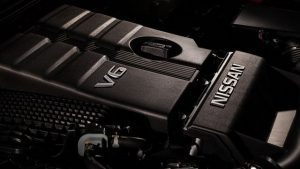 And – just like almost all the other trucks in this class – there’s no longer an option to shift for yourself.

The Frontier is Nissan’s mid-sized pick-up truck. It competes with the other mid-sized trucks in the class, including the Ford Ranger, Toyota Tacoma and the GM twins, the Chevy Colorado and its GMC-badged brother, the Canyon. 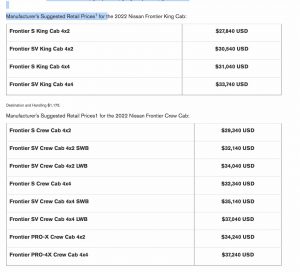 The range tops out at $37,240 for a PRO-4X trim (Crew cab only) with 4WD. This one comes with more ground clearance than the other trims (9.8 inches vs. 8.9 inches), Bilstein shocks, a locking rear differential, all-terrain tires and underbody skid plates.

The ’22 Frontier has been redesigned from the treads up.

Almost as big as a full-sized truck used to be.

No more option to change gears yourself. 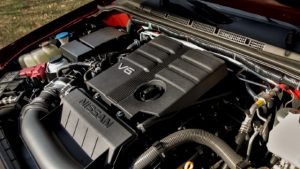 Nissan bucks the trend toward ever-smaller engines in ever-larger vehicles, including trucks. Including some of the Frontier’s four-cylinder-only competition, such as the Ford Ranger. The Frontier comes standard with a V6 – an engine that used to be the Frontier’s optional engine – and which was available with either a manual six speed transmission or (optionally) a five speed automatic transmission.

The standard Frontier engine was a 2.5 liter four cylinder engine, which was also available with either the manual or the automatic transmission. 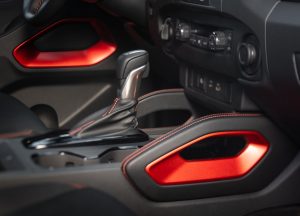 On the upside, there is more standard power – 310 horses, most in the class – and capability. The current Frontier can pull more than 6,700 pounds or almost twice what the old four cylinder-powered Frontier could pull. It is also much quicker, as it comes.

Zero to 60 in about 8 seconds – vs. about two seconds longer for the old four cylinder Frontier.

There’s another upside, too. The V6 doesn’t use much more gas than the previously standard four: 18 city, 24 highway vs. 19 city, 23 highway, the latter with the formerly available five speed manual transmission.

That’s the benefit of having another four gears – three of them (7th, 8th and 9th) being overdrive gears, which reduce engine speed relative to road speed – which is how you get 24 on the highway out of a 310 hp V6 vs. 23 on the highway from a 152 horsepower four. 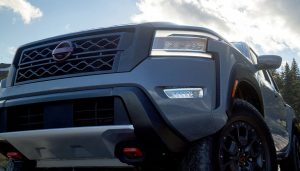 While you pay less – or at least, not appreciably more – for gas and get much more horsepower, you pay much more for it.

The least expensive version of the ’22 Frontier is almost $28k – for the 2WD version. With the optional 4WD system, it’s more than $31k.

For reference, the previous Frontier – with the formerly standard four cylinder engine and manual transmission – stickered for just $18,990

A word about diesel engines – which the Frontier doesn’t offer but which you can get in the GM twins: Their mileage gain is slight – about 30 on the highway, so about 4 MPG better than the Frontier’s gas V6 – but the cost is extremely high. GM only offers the diesel option in the highest trim versions of the twins and bundles it with a whole array of equipment that adds another $3,800 to the tab, pushing the price of a diesel-powered Canyon or or Colorado well over $40k. 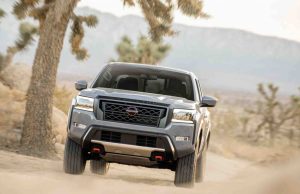 Who mourns for the lost third pedal?

Truck people used to like to shift for themselves. Especially thrifty truck buyers, who figured it made more sense to pay less for a truck equipped with a manual that maybe didn’t rate the same gas mileage numbers as one with an automatic – but which made up for that by saving them (usually) about $800-$1,000 to buy vs. the same truck with what was formerly the optional automatic.

There was also the chance – if you knew how to shift – of beating the automatic’s posted numbers. 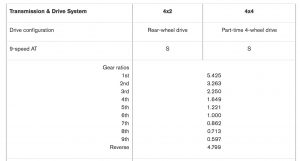 And that changes the numbers.

Over the course of a week of real world driving, the V6-equipped Frontier’s mileage numbers averaged mid-high teens – which is still ok for a 300-plus horsepower truck that is almost a full-sized truck (more on that below). 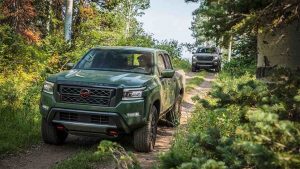 And the power is nice.

This writer owns an older (2002 model) Frontier equipped with the four cylinder engine/manual transmission combo. It is slower than Joe Biden without a TelePrompter  . . . but in a trucky kind of way, it’s more appealing to me than this automatic-only Frontier. The feel of the shifter – as opposed to a drive-by-wire selector – vibrating in my right hand, which is physically connected to the transmission, which I – the driver – have total control over. In this Frontier, the transmission decides when it will shift – and when. Even though there is a “manual” gear control function, it is in fact electronically controlled. If the computer wants an up (or down) shift, that’s what will happen – and does.

On the upside, Nissan has programmed the nine speed automatic to shift pretty seamlessly, so much so that it is hard to know – without looking at the digital display – which gear the transmission is in. And if you do tow – or rock crawl – the automatic offers advantages. 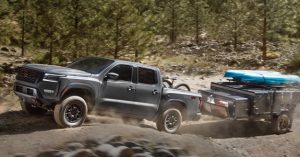 Still, the manual is missed – at least, by me.

Ride quality has been softened up, too. But not so much that this truck rides like a car. It still has leaf springs in the rear, just like the old Frontier. But the upsized size (length/wheelbase/width) vs. the last generation (and compact-sized) Frontier like my ’02 has markedly changed the current Frontier’s manners. My truck practically falls into potholes and feels a bit breezy on the highway.

This Frontier doesn’t – even at much higher  than highway speeds.

But it also feels much bigger – at low speeds – because it is. 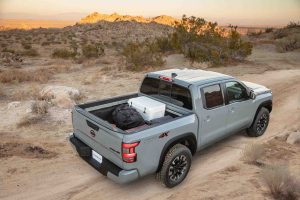 No one makes a compact-sized truck anymore – and the Frontier is no exception. The smallest version of this truck – King Cab with six foot bed – is 210.2 inches long, 73 inches wide, 72 inches tall – and rides on a 126 inch wheelbase. 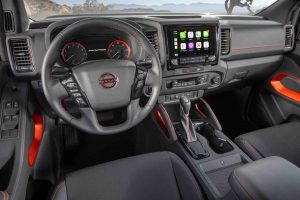 But the point remains: There aren’t any small trucks available today. What you can buy is a truck like the Frontier and the others in the class that are as manageable as full-sized trucks used to be, especially as regards loading and unloading them. Current full-size trucks are so jacked up – and have bed walls so high – that it is difficult to load/unload them, without a forklift.

Or a step ladder, to reach what’s in the bed. 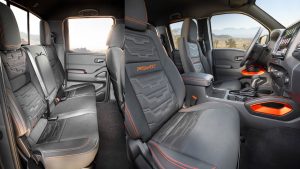 On the upside, the inside is almost as roomy as full-sized trucks’ insides used to be. Even the King Cab’s back seats are human-usable (in the previous generation compact-sized Frontier, like my ’02 they were useful . . . for your gym bag). If you get the Crew Cab, the back seats have even more room – including 33.2 inches of legroom, as well as the extra set of doors that let passengers get in and out without the driver or passenger having to get out, first. 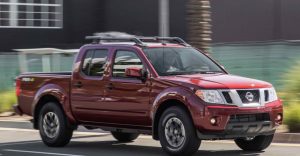 The styling is less distinctively Nissan than it was – and more generically New Truck. It shares a similar blockiness with other trucks in the class, which emulate the look of today’s super-sized trucks. It’s not unattractive – and not over-the-top. But it’s more more homogenous-looking than the previous Frontier, which had those specific-to-it riveted-looking fender flares and a jauntier shape.

All Frontiers come with some useful – if not obviously visible – built-in features such as the underseat storage in back and multiple 12V as well as four USB power points, so whatever you’ve got that needs power can be plugged in. 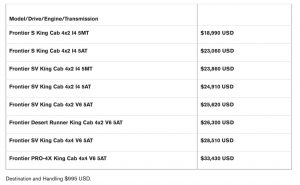 But there’s no regular cab or basic work truck version – another reason for the new Frontier’s pushing $28k base price vs. the old Frontier’s under-$20k base price. Even the base S trim has an 8 inch LCD touchscreen, a six speaker stereo with steering wheel-mounted secondary controls, an “Advanced” 7-inch Driver Assist Display, push-button start, power windows and locks. The only thing not automatic/electronic are the base trim’s outside rearview mirrors – which you still adjust by hand.

Also standard – even in the base S trim – are four wheel disc brakes a limited slip rear axle.

My ’02 Frontier has drum rear brakes and an open (non-locking/limited slip) axle, which you could’t get with the base trim or the four cylinder engine. But just a few years earlier, you could get a regular cab, four cylinder-powered Frontier with a manual transmission and 4WD, with a limited slip rear axle. 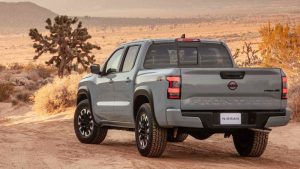 I know, because I used to own one of those.

It was an immensely capable, practical little truck that also cost less than $20k when it was new.

It’s a shame there’s nothing available, new, that’s like that anymore.

It’s more truck, in every way – including what it’ll cost you.