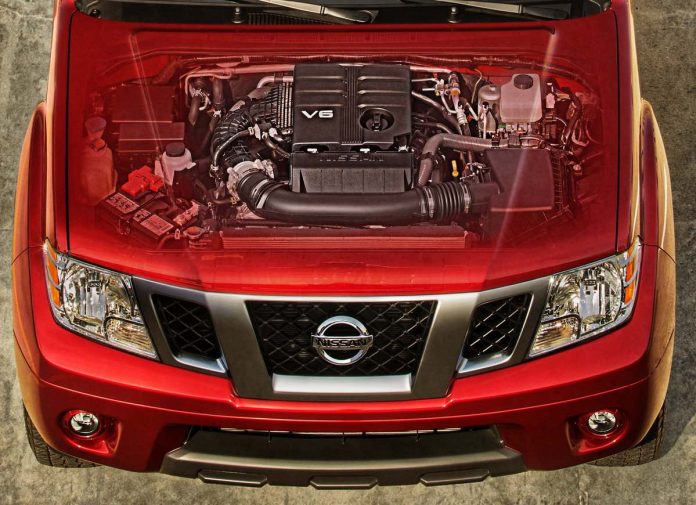 The new Nissan Frontier is actually pretty old; the 2020 model is essentially the same truck as the 2005 model.

And that’s not a bad thing.

This truck is the only new truck you can buy that isn’t encumbered by any driver usurpation (styled “assistance”) tech. No Lane Keep Assist, Brake Assist or Drowsy Driver nag – with creepy facial recognition/eye movement tech.

Just a back-up camera and a seat belt buzzer. You can even turn the traction control off – really off – and spin the tires, if you want to. And when you need to.

There’s almost nothing new about the latest Frontier – including its rugged and simple leaf spring/solid-axle rear suspension. Except for one thing.

And it’s a good thing.

There’s a new 3.8 liter V6 engine under the hood that’s the most powerful standard engine under the hood of any currently available mid-sized truck. It has more than twice the horsepower of the four cylinder engine that came standard in last year’s Frontier – and almost 50 more horsepower than the 4.0 liter V6 that was optional (and extra cost) in last year’s Frontier. 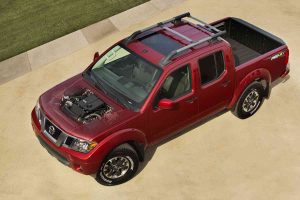 The bad news is that Nissan won’t be making this Frontier for very long. Not even a full year.

A new Frontier – very likely saddled with all the “assists” Nissan can think of – is on deck for 2021.

The Frontier is a mid-sized truck and like its primary rivals – the Ford Ranger, Chevy Colorado and Toyota Tacoma – is offered in two cab styles (extended and crew) and with short (five foot) or long (six foot) beds.

Unlike them, it comes standard with a big V6 – which some of them (like the Ranger) don’t even offer as optional equipment.

Also unlike them, it doesn’t come with the “latest” saaaaaaaaaaaaaafety tech. Or even an LCD touchscreen, if you can imagine. 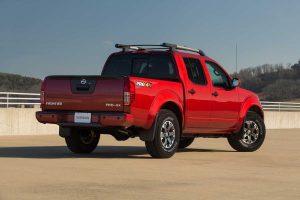 Which is probably why it starts under $20,000 – making it the least expensive mid-size truck you can buy.

Or at least, it did.

When this review was written in early March, Nissan hadn’t finalized official pricing for the 2020 Frontier with the new V6, which will be available at dealers in about a month or so.

The updated ’20 Frontier with the newly standard V6 will almost certainly cost more than the 2019 did – but the word is it’ll still cost less than rivals – especially when those rivals are equipped with their optional engines and come standard with all the very latest saaaaaaaaaaaaaaaaaaaaaaafety tech. 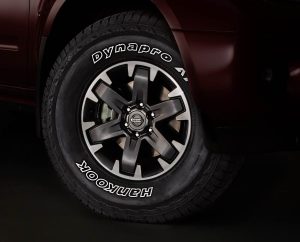 Also expect the new Frontier to tout the highest standard tow rating – a title currently held by the Chevy Colorado with its optional (and very pricey) diesel engine. It’ll pull as much as $7,700 lbs.

In addition to the new engine, the 2020 Frontier also comes standard with a new transmission – a nine-speed automatic.

In addition – or rather, subtraction – Nissan has thinned the trims for this final year of the old Frontier bodystyle. The (extended) King Cab version is available in base S and step-up SV trims only.

Strongest standard engine in the class.

Will probably cost you less than lesser-engined rivals.

Big V6 engine is probably a better long-term bet than a turbocharged four.

Like all the trucks in this class, there’s no regular cab option. 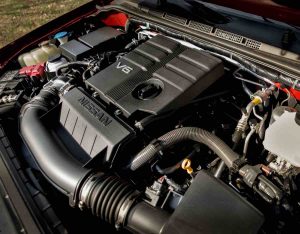 The Frontier’s standard 3.8 liter V6 makes a class-best 310 horsepower, more power than is available in any other truck in the class.

You can get a 308 horsepower 3.6 liter V6 in the Chevy Colorado (and its GMC-badged twin, the Canyon) but it’s optional. The GM trucks come standard with a 2.5 liter four summoning all of  . . . 200 horsepower. The other V6 that’s still available in this class is the Toyota Tacoma’s optional 3.5 liter V6, which makes 278 hp – also substantially less than the Nissan’s.

The Frontier’s V6 is also the largest standard engine in the class – which is arguably a good thing in a truck because larger engines make horsepower more easily – with less pressure – literally – than peaky turbo’d fours like the Ford Ranger’s standard (and only available) 2.3 liter engine.

Which doesn’t need to be breathed on to make all that power and so will probably last longer. One thing’s for sure: You’ll never have to worry about replacing a turbo or intercooler – because the Frontier’s V6 hasn’t got either one. 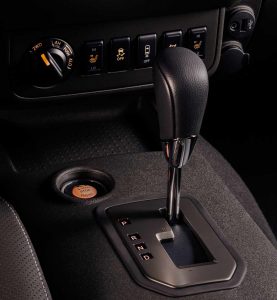 It is, however, direct-injected – which is becoming impossible to avoid in a new vehicle, chiefly because DI allows for a slight efficiency gain and also a slight emissions reduction – neither of them significant to the owner but very significant to a car company struggling to “achieve compliance” with federal ukase.

Mileage figures were not available when this review was written but should be significantly better than the horrendous 15 city, 21 highway posted by the 2019 Frontier with its optional and very old 4.0 liter (and just 261 horsepower) V6.

Nissan hasn’t published official maximum tow ratings yet but the off-the-record skinny is it’ll exceed the Chevy Canyon diesel’s 7,700 lb. maximum. If so, it’ll be very close to the max rating of the full-size Titan, which is rated to pull 9,370 lbs.

One roach in the burrito is the Frontier’s new nine-speed transmission – which isn’t a manual. Which you can no longer get. 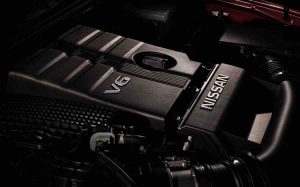 The nine-speed’s tighter gear spacing and multiple overdrive gears (7th 8th and 9th) cut revs at speed an increase MPGs but there’s no more changing gears yourself, which for some of us is a big part of the fun of owning a truck.

But the MPGs matter more to car companies – who must contend with federal mandatory MPG minimums. Automatics can be programmed to shift into overdrive sooner, to cut those revs – and increase those MPGs. The irony is that a properly shifted manual can be more efficient than the automatic but the variable is the driver.

Automatics take that variable out of the equation – and that’s why manuals are disappearing, even from trucks. You can’t buy any full-size truck with one – and it’s likely that within a year or to, you won’t be able to buy a mid-sized truck with one, either. 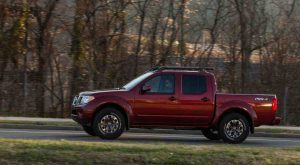 The Ford and GMC twins are already automatic-only and the only reason the Toyota Tacoma isn’t is because it’s old, too.

When it’s new – redesigned – bet your bippie it’ll be automatic-only as well.

Some reviewers fault the Frontier for being “rougher” than newer-design trucks like the Ford Ranger, which have been designed to emulate cars to the extent that a truck can without sacrificing the capabilities that people buy trucks for. 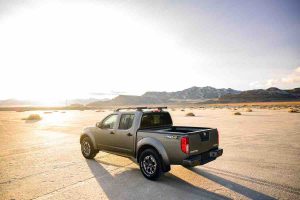 Because it does not have a four-wheel-independent suspension, like a car. It still has a solid-axle rear suspension, hanging from a pair of leaf springs on either end. These may not absorb bumps as well as an IRS and there’s more reverb on the washboards but there is something to be said in favor of a truck that feels like one – and the Frontier still does.

It’s rugged, macho – and not trying to emulate a car.

It is also likely to never need more from you than a new pair of shocks once every 75,000 miles or so. A solid rear axle/leaf spring set-up will usually outlast the truck. The perches are more likely to rust out before anything goes wrong with the leafs – and the solid axle has no external moving parts at all. So nothing external to deal with, ever.

If you like that, this is the truck for you. 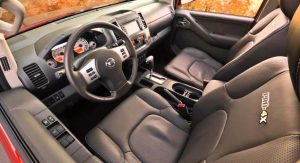 Result? The Frontier flies. Nissan hadn’t published official numbers, but my experienced seat-of-the-pants estimate is low sixes to 60 and you can burn the tread off the rear tires if you want to – which the old Frontier with the four was not only not very good at but couldn’t do at all.

The manual is missed, however – but Nissan has made the best lemonade it can out of the lemons handed it by Uncle.

We’re told that the Frontier and others in this class are “compact” trucks but the fact is they’re all nearly as log overall as the full-size trucks of the ’90s – in part because none of them are offered in regular cab configuration.

The upside to this additional length is more room. The Frontier has usable backs seats with 33.6 inches of legroom. 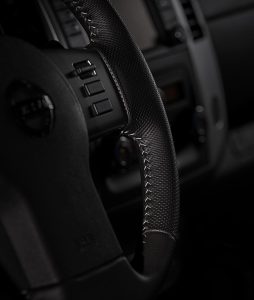 My 2002 Frontier – which is a compact-sized truck – has a set of useless fold-out jumpseats in the rear, with no legroom at all.

But that’s okay by me because I rarely need to carry people in the back – as opposed to cargo in the bed. The irony is my ’02 Frontier with a a six-foot bed can carry more cargo than a new crew cab Frontier with a five-foot bed, despite the new truck being a much bigger truck.

Apparently, there isn’t much market for regular cab pick-ups; they are becoming hard to find even among full-size pick-ups (the new Ram 1500 isn’t available in regular cab form). But one wonders whether this is what the market want to buy – or what the manufacturers want to sell. A basic regular cab work truck with a long bed isn’t the money maker that a crew cab with leather seats and rear-seat DVD entertainment is.

On the other hand, it’s also true that many people buy trucks because they can’t buy big cars anymore – and use them mostly to carry people rather than cargo. The vestigial bed being mainly for the dog and occasional mulch runs to Lowes. 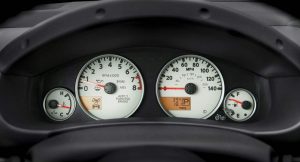 The metrosexual car press is criticizing the ’20 Frontier for not having a big LCD touchscreen – and for having an “ancient” analog gauge cluster rather than something digital and configurable, which is the latest gimmick being used to make new vehicles seem futuristic when in fact it’s just a way to gyp the dull, who do not grok that a flatscreen panel is cheaper to plug into a car (or truck) than real/physical gauges and apt to go blank screen on you at some point.

At which point, nothing works.

With “ancient” analog gauges, the fuel or volts gauge might fail; the tach (or speedo) might stop working – but not likely all at once and fixing the one that stops working is apt to be simpler and cheaper than replacing a bricked digital cluster. 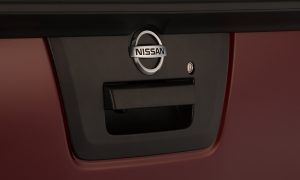 Nissan’s excellent Utili-track cargo-securing system is available; it uses adjustable/removable cleats that provide anchor points to suit almost any need. But even more useful – and standard – is the Frontier’s accessible bed. Which it is because the bed walls aren’t as high as the roofline – or almost that high – as they are in today’s Stupid-Sized full-size trucks.

Which have step-ladders and poles built into their tailgates, because that’s the only way to reach the bed.

The Frontier – and its rivals – are a way to get a full-sized truck like they used to make them. If only they made ’em available with a regular cab and an eight-foot bed.

And a manual transmission, too.

If you want to avoid the tech-nags and want more engine, the new Frontier is just the ticket.

Too bad it’s just for one year.