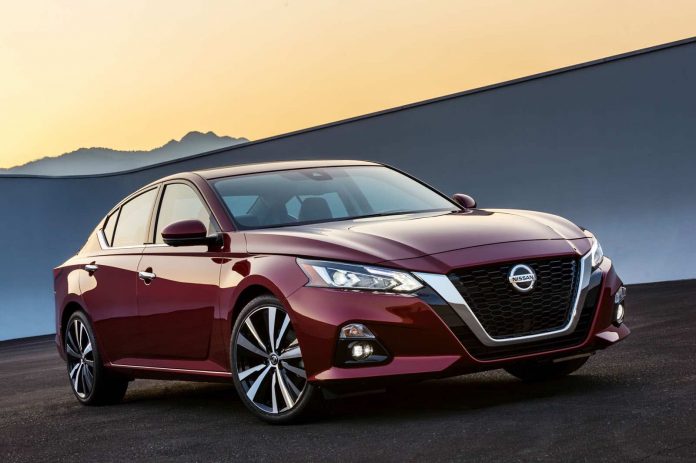 For a long time, Nissan’s Altima and Maxima sedans have been so similar it’s been hard to tell them apart – and not just in terms of their looks.

Now the Altima’s got a new engine – one not available in the Maxima.

It also offers AWD – something that’s not available in the Maxima or the two best-selling mid-sized family cars the Altima directly competes with – the Toyota Camry and the Honda Accord.

Including a larger trunk and more backseat legroom than the Maxima.

Like the Maxima, the Altima is a mid-sized sedan.

Unlike the Maxima, it’s available with Nissan’s new turbocharged/variable compression 2.0 liter engine, which replaces the Maxima’s V6 as the Altima’s optional engine. 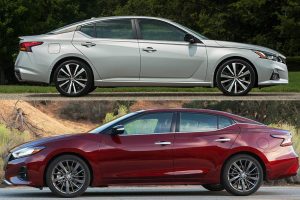 Interestingly, this engine makes more torque than the Maxima’s much larger 3.5 liter V6 – and almost as much horsepower – while returning better gas mileage.

The Altima is also now available with AWD while the Maxima is (for the moment) front wheel drive only.

There is also the matter of MSRP.

The Maxima does come standard with the V6, but for about the same money, you can buy a top-of-the-line Altima Platinum with the high-powered, high-efficiency turbo 2.0 engine; or pay thousands less for a mid-trim SL with the turbo engine and AWD. 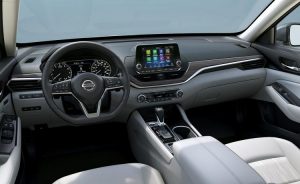 The larger-than-Maxima trunk – and roomier second row – are included at no additional charge.

Nissan redid the Altima from the wheels up last year (2019 model year) so the ’20 carries over with just a few styling and trim tweaks.

Offers AWD in a class where it’s still inexplicably uncommon.

Offers almost as much power as much more expensive Maxima – for much less money.

USB ports for the backseat passengers. 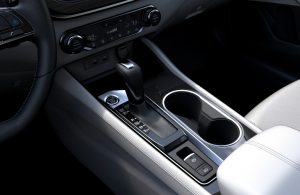 Departed V6 (still available in the Maxima) was a simpler engine – no variable compression technology – and known to be a 200,000 mile engine. The new 2.0 has yet to prove itself as reliable.

And may prove not to be.

You can go with the standard 2.5 liter four cylinder engine, which makes 188 horsepower – paired with a CVT automatic and your choice of of FWD or AWD. 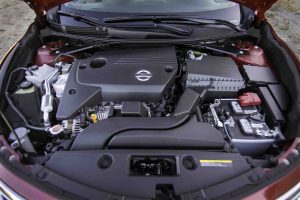 The Altima’s 2.5 liter engine makes slightly less power than the current Camry’s standard and class-leading 203 hp 2.5 liter four but within the margin of error vs. the current Accord’s standard 1.5 liter turbo four (192 hp) and the Mazda6’s standard 2.5 liter, 187 hp four.

Mileage with the Altima’s standard engine is very impressive: 28 city, 39 highway – the latter figure as good as many compact-sized economy cars. 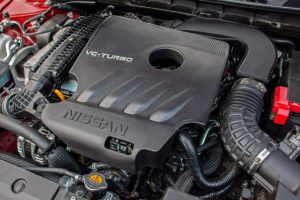 The Altima’s optional 2.0 engine is also paired with the CVT but is only offered in FWD configuration.

But for reasons known only to the emperor – and Nissan muckety-mucks – the 2.0 engine isn’t available with AWD.

On the upside, mileage with this engine – 25 city, 34 highway is almost as good as with the much less powerful 2.5 liter engine. 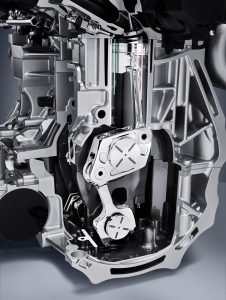 On the downside, it’s a weird engine, with a highly unconventional connecting rod arrangement that allows changes in stroke (how far the rod/piston travel up and down) to alter the engine’s compression as the engine runs.

But how it holds up long-term to have connecting rods with what amount to joints (like your knee, which lets your leg flex out straight or bend) is for time to tell. 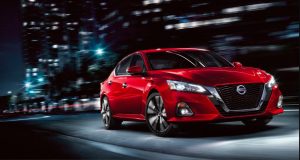 With the 2.5 engine, the Altima is economical. With AWD, it’s practical – a car that’ll get you to work when it snows. 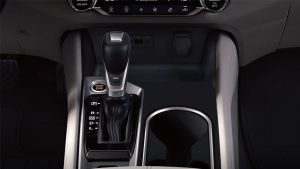 The transmission mimics the stepped gear changes of a traditional automatic – instead of buzzing the engine to high RPM and holding it there, as some CVTs do. But there’s no shift shock as the CVT steps from one range to the next; you can hold an open cup of coffee during full-throttle runs without having to turn around, go home and change your shirt.

Wheel-hop (and toque steer) with the optional 2.0 engine is there but you have to work for it. Unless you’re trying to get it to hop-skip left-right a little, it usually won’t. The variable-compression system works with the traction/stability control to modulate both power production and delivery. 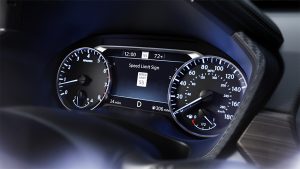 It feels as strong as the old V6, but doesn’t sound as good – the primary subjective criticism one can fairly level at the new engine.

BMW has the same issue with the 2.0 liter four it uses as the standard engine in the current 5-Series, which used to come standard with a six.

The tangibles – power/performance/mileage – are better. But the intangibles aren’t. 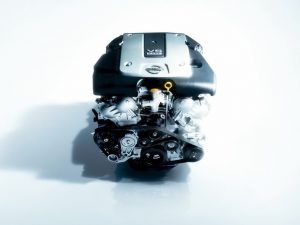 Nissan’s V6 is one of the best out there – and has been, for decades. Powerful, sweet-sounding and a rep as trustworthy as the pope’s.

It would likely be around for decades more . . . were it not for the Climate Change Cult and the fuel economy fatwas which are killing off engines larger than 2.0 liters in pretty much everything.

The Maxima is probably next.

Driving-wise, the Altima is more fun – even though the V6 is gone. It’s tuned for a more enthusiastic pace than the increasingly luxury-minded Maxima.

Get the SR for the most enthusiastic Altima. It comes with  19-inch wheel/tire package and paddle shifters for the CVT. 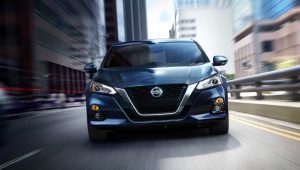 Nissan also offers a self-driving feature called ProPilot; it steers and brakes for you – a neat gimmick but also arguably dangerous as it encourages the driver to not drive the car.

Nissan – and everyone else offering this tech – is careful to characterize the tech as an “assist” and to warn the driver to maintain eyes on the road (and hands on the wheel) at all times.

But everyone knows this is fatuous. People are going to text/fiddle/sleep/have sex – anything but pay attention when they have tech in the car that drives it for them.

Just remember: If you wreck, the tech isn’t going to get the ticket – or the lawsuit.

The Altima looks a bit less rococo than its Maxima sibling, which may be preferable if you prefer a more subtle look.

The larger (15.4 cubic foot vs. 14.3 cubic foot) and noticeably roomier backseat (35.2 inches of legroom vs. 34.2 in the Maxima) are simply preferable – especially given you pay thousands less for both of these extras .

Interestingly, the Altima is now fractionally larger than the Maxima: 192.9 inches bumper to bumper vs. 192.8 inches for the current (2019) Maxima. Which will probably be upsized a little when Nissan brings out the updated (2020) version a few months from now. 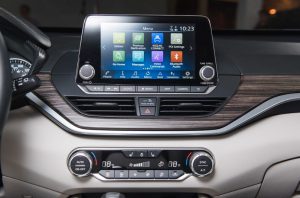 One area of major departure – in the Maxima’s favor – is inside.

The Altima has a bland and derivative cabin compared with the Maxima’s. The main gauges  – speedo and tach – are similar but everything else is profoundly not. For example, the Maxima has a less-afterthoughty secondary LCD cluster built into the center stack while the Altima has a generic-looking iPad mounted to the top of its center console. The Maxima’s center console flows upward into the center stack – while the Altima’s is a boxy bin bolted to the floor.

Perfectly functional – but in the manner of those cardboard thing they give you at fast food places to carry four drinks.

And then throw away. 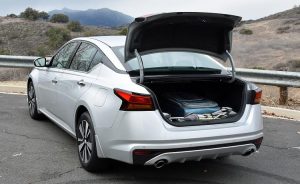 On the upside, the Altima is more ergonomic. The controls for all the car’s functions are obvious and easy to work without having to take your eyes off the road.

The “zero gravity” seats are among the best out there. (Volvo’s are slightly better – but only slightly.)

Visibility is better-than-Maxima, too – because of the more restrained styling. The Altima’s about an inch taller than the Maxima – and so is its side glass. This doesn’t look as radical when viewed from the outside but it does make it easier to look outside the car – and notice other cars. 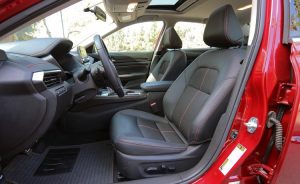 Another practical plus is the Altima’s wider-opening doors. They open to almost a full 90 degrees, which is helpful to those not-spry and also in terms of jamming stuff inside the car that might otherwise be more challenging to get in there. This is an important consideration in a sedan – most of which are functionally disadvantaged relative to crossovers of the same or even smaller overall size because of their limited ability to cart large/unwieldy items home.

With its larger than Maxima trunk – and it’s more accessible interior space – the Altima is a stronger contender vs. crossovers than the more stylish but less practical Maxima. 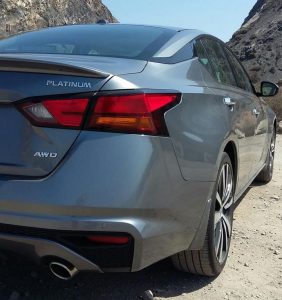 The Altima’s main appeal is its available AWD – which isn’t available in cross-shops like the Camry, Accord and Mazda6.

It’s odd that none of these offer AWD – given that AWD is offered in practically everything else. The fact that it isn’t probably accounts considerably for the dwindling popularity of sedans as a class.

And particularly, dwindling sales of Camry and Accord.

Not that AWD is all that – a set of good snow tires will take you almost anywhere in a FWD car . . . assuming you know how to drive in the snow.

Regardless, many buyers have been convinced they have to have AWD – even if they almost never have to drive in the snow. And if people want it and you’re not selling it, they’re not going to be shopping at your store.

It’s therefore startling that Toyota and Honda – for decades the sales leaders when it comes to family sedans – decided not to offer AWD when they rebooted their sedans last year. 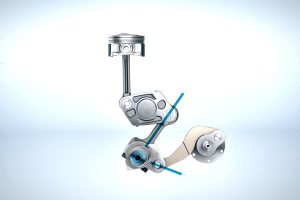 Nissan ought to send them both a thank-you card.

But, there’s that variable compression engine.

It’s a risk factor; the long-term unknown. AWD or not, the Camry and Accord are known things. And for many buyers, that may matter even more than the Altima’s available AWD.

Nissan has taken a gamble with its radical new engine – while also offering buyers something novel.

One offers more traction; it remains to be seen whether the other gets traction.