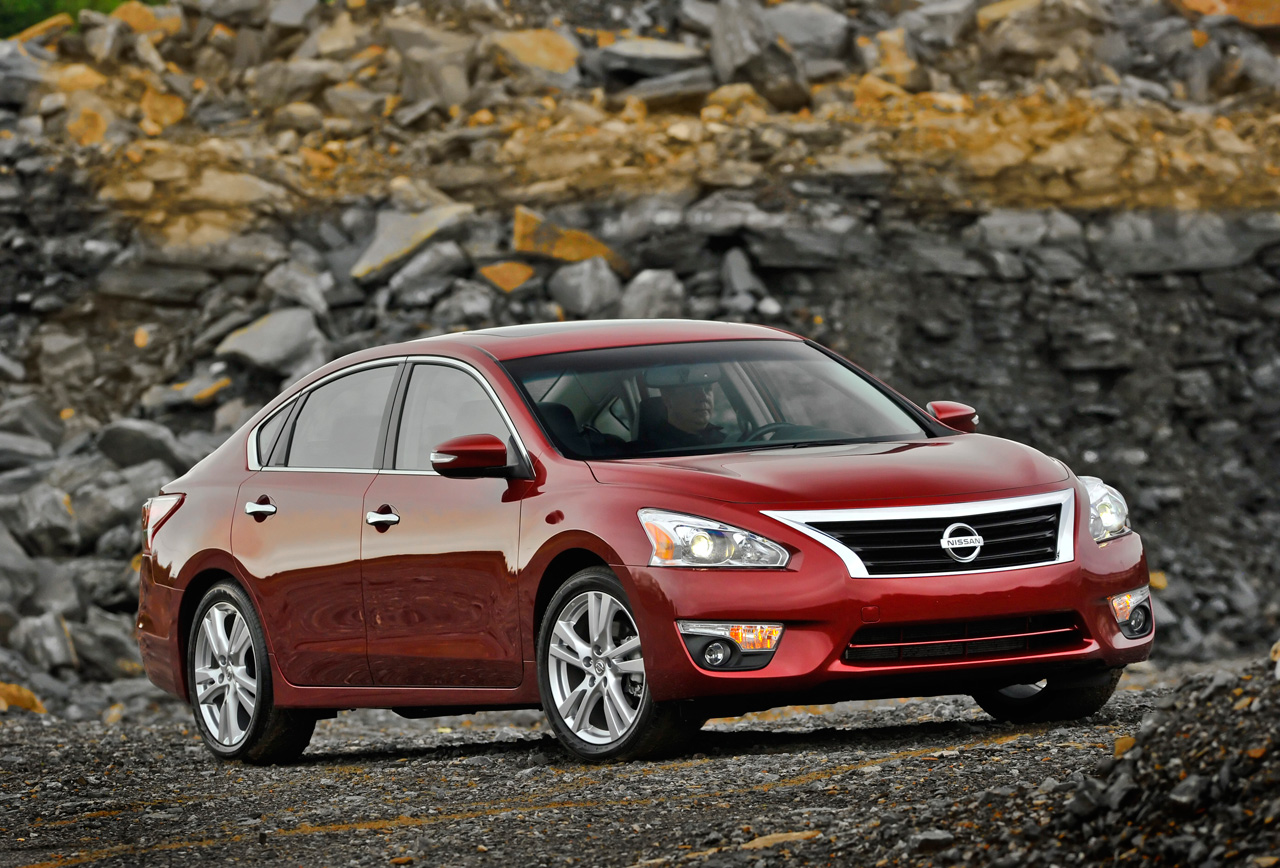 You may have heard this story: 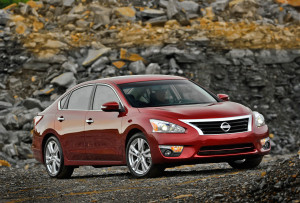 Back in the mid ’60s, that wild and crazy guy John Z. DeLorean – father of the GTO – almost fathered a Pontiac rival to Chevy’s Corvette. It was a slick two-seater called Banshee (internally, XP-833) that got disappeared as soon as GM upper management discovered what he was up to.

It’s been retired – after having been horribly gelded last year.

Nissan pulled the formerly available V-6 engine – and the manual transmission. The only way you could buy a 2013 Altima coupe was with the four cylinder engine paired with a CVT automatic. 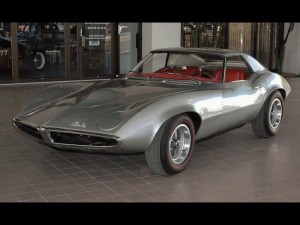 Which probably explains why there’s no 2014 Altima coupe.

After all, the Altima coupe looked a lot like the Z – even if it was front-wheel-drive (while the Z is, of course, rear wheel drive). And it had – until they pulled it from the roster – the same basic V-6 engine/six-speed manual transmission combo.

It also had a much lower price – just like the stillborn Banshee would have had relative to Corvette. And that might have been its fatal flaw. 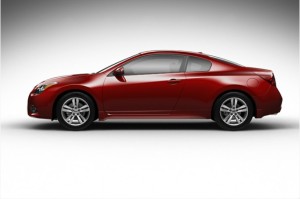 But, there’s still a way to pull a DeLorean at your local Nissan store. Take a look at the 2014 Altima sedan’s stats. You’ll find it’s about the same size outside – and actually has more room inside – than the considerably pricier Maxima sedan.

You can order it with the same basic V-6 engine – and thusly equipped, it outperforms the Maxima, too.

And – here’s the bell ringer – you can get a V-6 Altima for about $5k less than you’d pay for the Maxima. 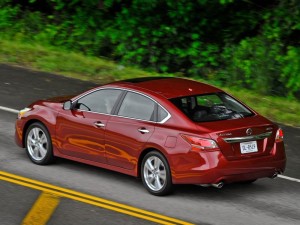 The Altima is Nissan’s mid-sized, mid-priced sport sedan. It also happens to be Nissan’s largest sedan.

It’s about the same size on the outside – and roomier inside – than the much more expensive Maxima sedan.

And it’s available with the same 3.5 liter V-6 engine that’s standard in the Maxima (and shared with Nissan’s Z-car sports car).

Or the Mazda6 – which is a very attractive and fun to drive car – but which no longer comes with a six at all. 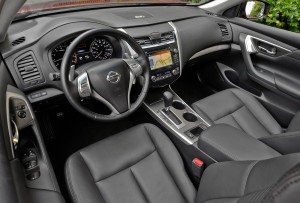 The ’14 Altima is fundamentally a carryover (having been “all new” in 2013) but there are a number of key upgrades for the new model year, including available Pandora and Facebook connectivity (god help us) via NissanConnect, a Moving Object Detection (MOD) system and a “curve warning” system (integrated with the navigation system).

A “DriveAssist” display with 3D graphics (located in the main gauge cluster between the speedometer and tachometer) is now standard in all trims.

For those more interested in driving, there’s a new Sport Value package that can be ordered with S models. It gets you an upgrade wheel/tire package, trunk mounted spoiler and remote-start (via the key fob). There’s also an upgraded touchscreen LCD display monitor, if you order the Display Audio package.

As mentioned above, the coupe has been discontinued. 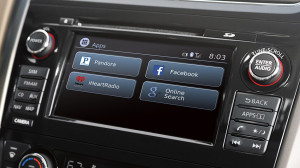 Roomier inside in several key categories than the Accord.

Roomier in all categories than the Maxima.

Still available with a V-6.

No more manual transmission – with either engine. 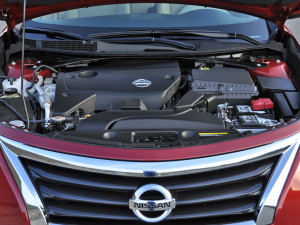 Standard equipment is a182 hp 2.5 liter four-cylinder engine paired up with a continuously variable (CVT) automatic. This version of the Altima can get to 60 in about 7.8 seconds – a solid half second improvement over the previous generation Altima sedan.

And – bonus ! – the 2.5 liter engine is also capable of delivering 27 MPG city and 38 MPG, numbers that just three or four years ago would have been considered top drawer from a compact economy car.

Equipped with this engine the 0-60 time dives down to a very quick 6.2 seconds – among the quickest times in this class. Fuel economy is also very good with this engine: 22 city, 31 highway. 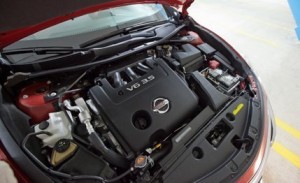 The standard – and only – transmission is once again Nissan’s excellent (but take-it-or-leave-it) CVT automatic.

Some sport-minded buyers may be put off by the absence of a third pedal – especially in view of the fact that several of the Altima’s main rivals – including the Accord and Mazda6 – are still available with manual transmissions.

All versions of the Altima are – like the others in this segment- front wheel drive. 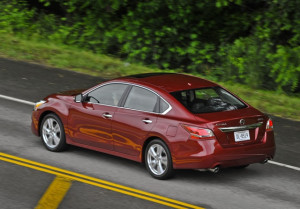 Over the past several years, the Altima gradually, almost imperceptibly, became what the Maxima once was – Nissan’s sportiest four-door model. When the Maxima lost its manual transmission and evolved into a still-powerful but more luxury-minded touring car, the Altima stepped in to fill the void as Nissan’s hot-shoe sedan. It was almost the same size overall (still is) and it had (and can still be ordered with) the same basic Z-car sourced/shared V-6 engine.

But most of all, you could get that sweet-sounding (and sweet-pulling) six in the sedan  . . . and with a manual transmission.

Thusly equipped, the Altima became for all practical purposes, the new Maxima  . . . . just with a different name.

I’m not sure what the Altima is now.

Or rather, what its role is in Nissan’s lineup – other than as a lower-cost alternative to the Maxima. 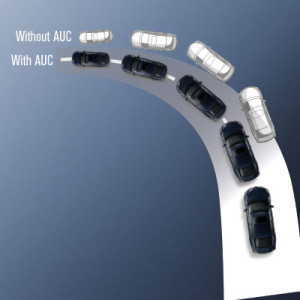 It is still an athletic car – even with the base four-cylinder engine. With the V-6, it will outrun most of the other cars in this class.

Handling is excellent, too.

The ’14 Altima (all trims) features an Active Understeer Control System that counteracts the built-in tendency of a front-wheel-drive car (which is nose heavy, due to the weight of the engine/transaxle up front) to feel as though it’s plowing toward the outside of the curve rather than tracking with your steering inputs through the curve. The system lightly applies braking pressure to the inner wheels (front and rear) during cornering to keep the car settled and feeling to the driver like a rear-wheel-drive car. This all happens automatically – with no physical sensation it’s happening. 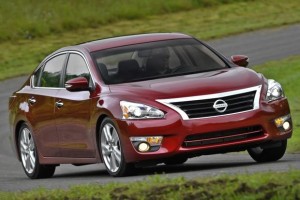 As in the Maxima, there’s not much for the driver to do anymore. Push the accelerator and the car goes – swiftly, quietly.

Turn the wheel – and the car turns. And goes exactly where you point it.

But, without a clutch to push in, without gears to row – something important has been lost. What’s the difference between the Altima V-6 and the Maxima in terms of how each car drives, rides and handles?

Though the Maxima’s version of the 3.5 liter engine rates higher – 290 hp vs. the Altima’s 270 – acceleration is virtually the same. The Maxima does 0-60 in about 6.2 seconds – and so does the V-6 Altima. They’re neck-and-neck past the checkered flag, despite the Maxima’s on-paper power advantage – because the Maxima is heavier by several hundred pounds. 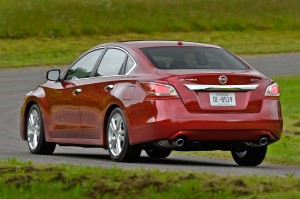 The question arises: Why buy the Maxima? And the answer is: Because it’s more luxurious – fitted out with more in the way of standard amenities.

Which prompts the follow-up question: Why buy the Altima?

The ’14 Altima is the biggest Altima so far. Bigger, in fact than the Maxima – which is odd given that – usually – the top-dog model (that would be the Maxima) is the largest/roomiest model in a given automaker’s lineup.

The wheelbase is the same as the previous generation Altima (109.3 inches) but the current car is about an inch longer (191.5 inches vs. 190.7 inches) and both the front and rear track (distance between the wheels) has been significantly increased  to 62.4 inches in front and back vs. 61 inches before. 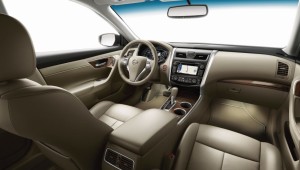 Visually, this gives the Altima a wider/hunkier stance. Functionally, it allowed Nissan to carve out a bit more space inside for passengers. There’s almost an extra inch of front seat legroom (45 inches now vs. 44.1 before) and a wee bit more legroom in back, too (36.1 inches vs. 35.8 before). Shoulder room is noticeably more generous: 56.4 inches in front and 56.1 in the back seat vs. 55.7 up front and 55.5 in back for previous-gen. Altima.

This – interior roominess – is an area where the Altima smokes the Accord. The Honda has only 42.5 inches of front seat legroom, though this is made up for by very generous legroom in the back seat (38.5 inches). This is nice, of course . . . for the Accord’s backseat occupants. But taller drivers will find the Altima (which also has more headroom up front) much more accommodating. 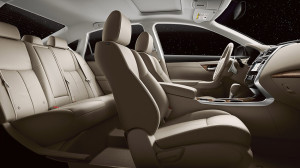 What’s really noteworthy, though, is that the Altima’s interior is roomier than the Maxima’s. And not by a little bit, either. In the Maxima, there’s only 43.8 inches of up-front legroom – and in the back, just 34.6 inches. There’s also less shoulder and head room. 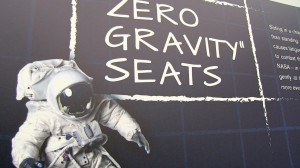 The shifting emphasis toward practicality (roominess, fuel economy) and comfort is also apparent as far as the new Altima’s “zero gravity” seats – which Nissan says were designed using NASA’s astronaut research to relieve pressure point areas – you know, the ones that make your butt go numb on long road trips. And they are noticeably more comfortable, not only vs. the previous Altima’s seats but vs. the seats in other cars in this segment, such as the Accord. The doors in my test car were also softy padded with a cushy looking and feeling velour-type material – including the arm rests.

If you order the V-6 equipped Altima 3.5S, you’ll get an upgraded 18-inch wheel/tire package (16s are standard), better brakes and a Sport mode for the CVT automatic with steering wheel-mounted paddle shifters for manual control. This version of the Altima is a performance deal. A comparably kitted out V-6 Accord is almost five grand more to start. 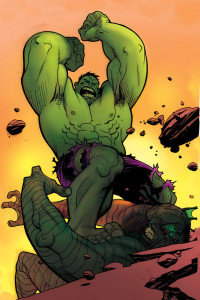 If only you could still order the Nissan with a stick. . . .

The one thing – the only thing – I  really dislike about the new Altima is the “curve warning” system – which is integrated with the optional GPS. It will drive you batty – and possibly, drive you off the road.

Not one but two annoying electronic chimes assault you – the first an owl-like sound as you approach a curve, followed by a sharper beeping noise as you enter the curve. A little warning icon indicating “curve ahead” – and distance to curve – appears in the lower right corner of the LCD display.

On a curvy road, the literally incessant eruption of obnoxious beeps and chirps is more distracting than a pair of eight-year-olds fighting in the back seat. Thank god, the GPS system is optional and – I assume – it is possible to turn off the curve warnings. (I was unable to figure it out; there’s no obvious “off” button – and Nissan didn’t provide an owner’s manual with my press car test car.) 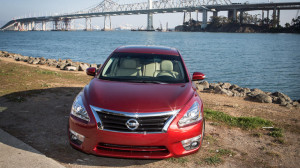 The Altima may no longer come with a manual – or be available in two-door form. But it is available with most of what you get in the Maxima . . . for a lot less coin.