It urges “geofencing” and other forms of electronic throttling of vehicles – so that no matter what you drive, it always goes . . . slow. Or rather, no faster than the sign says.

Or where – and when – the government says.

Thus making what you drive irrelevant. What would be the point of owning a Porsche rather than a Prius when both go just as slow?

And that’s just the point.

People like the one who wrote this thing have been advocating such things for decades. They want homogenous – and centrally controlled – transportation.

It’s never been much of a worry until recently because the technology wasn’t ready – and neither was the culture.

Most people weren’t like the person who wrote this article – which is to say, people who hate cars and want to throttle them. And the culture didn’t encourage such people. The Safety Cult was until relatively recently a kind of backwoods aberration – its appeal limited to people morbidly obsessed with risk – and allowing freedom – fulminating with anger towards other people not similarly afflicted.

“We have written many posts about how hard it is to control speeding when the roads are designed so that people can drive twice as fast and the cars are designed to go four times as fast,” moans Lloyd Alter, the author of the article referenced above.

But Safetyism is now the national religion – and technology is ready.

“There was also a similar battle over mandatory seat belt use, where people would complain in 1985 that ‘this is not supposed to be (Soviet) Russia where the government tells you what to do and when to do it. ‘ ”

But that was 1985 – when America was not yet Soviet Russia.

“Who did those interfering busybodies in Washington think they were? They’d be banning smoking in bars, next.”

And now what’s next is here.

Face Diapers. Mandatory Jabs. Cars that lock themselves down. 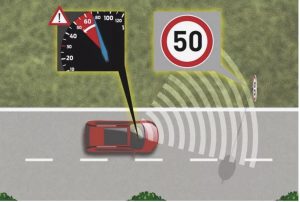 That which Alter pines for isn’t something merely desired but fated – and not just by precedent. The necessary electronics are, to a great extent, already embedded in many new cars – having been required by law (in Europe) in new model cars beginning with the newest new cars – i.e., those just redesigned for the 2022 model year – and by 2024, all new cars.

These must be equipped with what is styled Intelligent Speed Limit Assist (ISA).

It won’t be just Europe, either. Just as it isn’t just Europe that is Diapering, Jabbing and segregating.

It ought, by now, to go without saying than whenever you hear the word “assistance” you ought to assume it means control. And so it does. The ISA system uses the GPS-based navigation almost all new cars have had built in for at least a decade now, to monitor your speed as you drive. The car knows what the posted speed limit is on every mapped road – and the car also knows, of course, how fast it is going. If the car’s speed exceeds what’s allowed, the car slows itself down.

That is how it “assists” you.

This can be overridden – for now – by “pushing through” the electronic speed limiter, by pushing down harder on the accelerator. But it is just a matter of one more update to preclude that.

If the slow-it-down code is transmitted – your car being connected – it will no longer be possible to go faster. You will not be allowed to override the ISA, no matter how furiously you mash the gas.

Because the pedal isn’t connected to anything mechanical.

In the pre-Borg’d past, cars had driver-controlled mechanical throttles. If you pushed down on the accelerator, it opened (via a cable connected to the pedal) the throttle. The car would speed up, no matter what the sign said.

Now speeding up is entirely under the control of the computer that governs the throttle – and the computer is controlled by code, updated at whim – and over which you have no control. If the computer decides to cut the throttle, it will cut the throttle. Just as a programmed automatic transmission cannot be overridden. Even gear selection is an illusion. You don’t engage Drive or Reverse or anything else. The computer does, in response to data received via electronic inputs – via the button you pushed and the signal sent. But it acts according to its programming.

Brakes are not far behind. 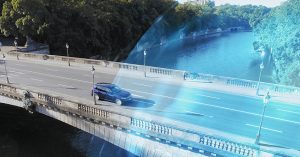 Though still – for now – mechanically (hydraulically) connected to your foot, via the pedal, they are also increasingly under electronic control, too. Computers and programming decide it’s time to brake – and the car does, even if you haven’t.

Of course, this is styled Braking Assistance.

Even steering is now partially electronically controlled. Lane Keep Assistance. There it is – again.

All of this assistance will lead to the end of your control of what may still be nominally your car – in the sense that you are expected to pay for it and for the taxes levied upon it.

Alter can’t wait for it.

He notes BMW’s new geofencing tech – part of the standard suite of electronic controls embedded in the company’s new electric scooter, the not-at-all-awkardly named i Vision AMBY – ” . .. know(s) where the bike is , thus allowing it to automatically adjust its top speed. This way you don’t have maniacs riding 37 MPH down the bike lane at your local park.”

Or heathens not wearing “masks”  . . . and refusing to be Jabbed.

“If BMW can say that about e-bikes, surely it would recognize the danger of having its car owners driving at 37 mph down Parkside Drive in Toronto, with its 30 mph limit,” Alter writes.

Cue the announcer at Lakehurst, New Jersey in 1937:

It doesn’t matter that the risks imagined by Safety Cultists such as Alter are mostly just that – imagined. What matters to people like Alter is their fear of risk – and that everyone be presumed a horrendously unacceptable risk.

Because you can never to be too safe.

For neurotics – and control freaks.