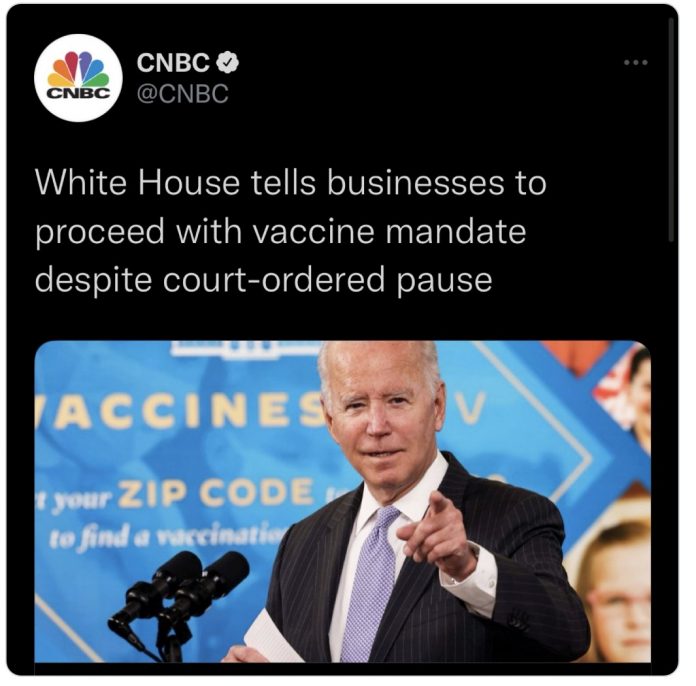 When the law givers ignore the law, is there any obligation to obey the law-givers?

This question arises in the wake of the Biden regime – the right word, as it conveys the fundamental essence of the thing, as in capo regime . . . as in gang of thugs – announcing it doesn’t give a tinker’s damn for the recent  federal court stay of its order to private employers of 100 or more to require all employees submit to the Jab – else be Jabbed, themselves, with extortionate fines applied by OSHA.

Which lacks lawful jurisdiction to decree such a thing.

Never mind, moreover, that the capo regime hasn’t bothered to shepherd legislation through the “democratic process” – leg-humped when convenient – but rather simply ordered the mass Jabbing.

And the mass fining.

This being of a piece with the orders of the Don, duly enforced by the capos.

Well,  the Fifth Circuit of Appeals – which is a court and a federal one, at that – with legal/constitutional authority to bind the power of the federal government – issued a stay.

Which means that the Jabs cannot lawfully be required – or the fines applied – until after due process of law has elaborated.

Full stop. For now, at least.

This is the way it once worked when this country was governed by laws.

Some – okay, many  – of these laws were not good laws. But they were at least laws – the “at least” being a reference to the fact of some degree of process and accountability rather than the simple – do as you are told, because we tell you to do it – governed the law.

And bound the law-givers.

Remember, the president is – at least in theory – an executive. The chief executive, to be sure. But he is not – by law – a giver of law. His constitutional authority is to see that the laws are faithfully enforced.

Not to enforce his orders.

That is what capo regimes do. 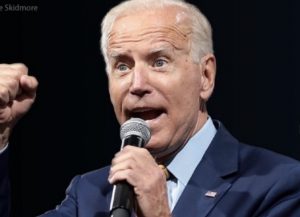 Not even The Chimp did what this one is doing.

Remember I am the decider?

Woke leftists denounced The Chimp for that – and The Chimp was only asserting his prerogative to fire (or not) Don Rumsfeld, something he did have lawful authority to do.

Where are the situationally outraged Defenders of Democracy now?

The very bad precedent of executives ordering has of course been around for some time; it predates the Biden regime.

It made possible this regime’s executive ordering.

But – until now – no executive in modern times has ordered in defiance of a federal court order.

That being something very arguably impeachable.

Something that arguably calls for more.

A regime that orders – that refuses to acknowledge and submit to lawful orders – is a regime that can rightly be regarded as wholly unlawful and thus, illegitimate.

Whether the Don at the head of this regime was lawfully elected remains a matter of ongoing debate. There is a sufficiency of hinkiness to suspect the election was jiggered with, as via the weird/delayed count on Election Day (and into the next day) as well as the very iffy phenomenon of counting without first vetting a tsunami of absentee ballots.

But it is incontrovertible that the Don considers his regime above the law. That his will alone is the law.

It absolves us from obeying his lawlessness.

In a way, then, what the Don has done is a boon in that it has exposed the regime. The situational reverence for “democracy” – when it suits. The resort to force – when it suits.

One of the regime’s consiglieres – White House Deputy Press Secretary Karine Jeane-Pierre – laid down the regime:

“People should not wait. They should continue to go – move forward and make sure they’re getting their workplace vaccinated.”

It is not “people.” It is employers – being threatened by the regime to force their employees to submit to being jabbed, via persuasive methods essentially the same as those employed by Luca Brasi – the fictional enforcer of the famous movie Don’s will. He secured the compliance of a recalcitrant movie producer by assuring him that either his signature – or his brains – would be on the paperwork placed before him, releasing the Don’s favorite singer (Johnny Fontaine) from contractual obligation. 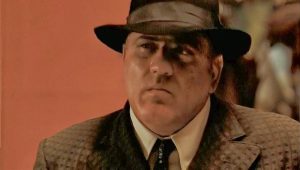 The difference being the Don never pretended to be other than the head gangster of a regime   – and none of us ever signed a contract legally obliging us to obey.

Certainly not this regime – or this Don.

It is noteworthy – again – to point out that this “appropriate and necessary” Jab order doesn’t go into effect for almost two months, which suggests the Jab isn’t either thing. If it were, the Jab would be required right now.

Is “the pandemic” on hiatus until January?

What is actually “necessary” – from the standpoint of the regime – is that people accept its lawless orders. That we obey – whatever they say. That’s it. That is what was said by the regime’s halting announcement that it would not respect the stay ordered by a court with lawful jurisdiction over what it can lawfully order.

So let it begin.

It has already started.