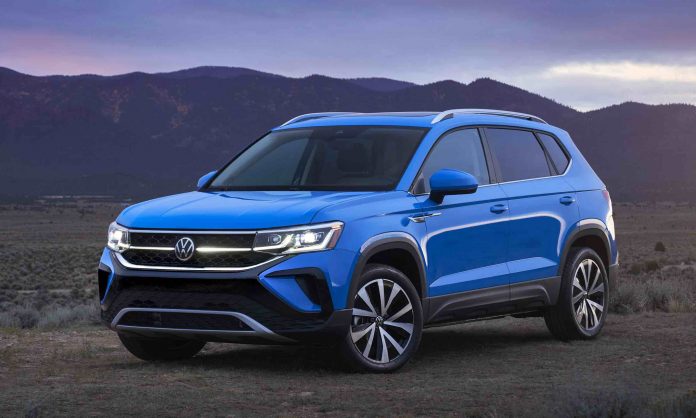 Sometimes, a car company will bring out a new model so appealing it winds up costing sales.

This new Taos from VW, for instance.

It’s less expensive than the VW Tiguan – and roomier, too.

Did we mention that it gets better gas mileage on top of that? And comes standard with features like the Digital Cockpit instrument cluster that up to now has only been available in the most expensive version of the Tiggy?

So, what’s the catch?

The Taos is VW’s newest model – and smallest, most affordable new crossover.

But it’s only smaller – on the outside – than the Tiguan, VW’s formerly smallest and most affordable crossover. 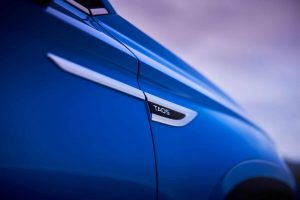 So what do you get in return for paying more – for the Tiggy?

Well, there is a third row – which comes standard in the Tiggy.

The Taos doesn’t offer that. 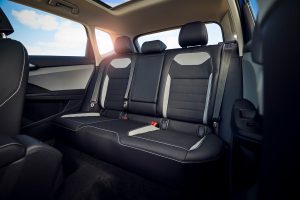 Which is also by the way the only version of the Tiggy that comes standard with the Digital Cockpit instrument cluster that’s standard in the $22,995 to start Taos.

The Taos is the newest VW model, nominally intended to box with the other small crossovers its price range such as the Mazda CX-30, Kia Seltos, Subaru Crosstrek and Honda HR-V.

But its features – and space for the price – inevitably invite cross-shop comparisons with its higher-priced – but less spacious  – sibling. 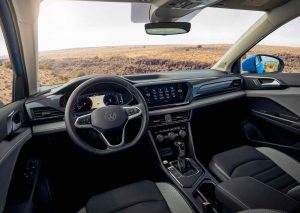 More for your money – literally.

Almost as easy on gas in city driving as the Tiggy is on the highway.

Two available automatic transmission – neither of them a CVT automatic.

Not as much engine as you can get in rivals like the Seltos and Mazda CX-30.

No manual transmission option (the Subaru Crosstrek comes standard with a manual).

Not as many seats as you get in the Tiggy. 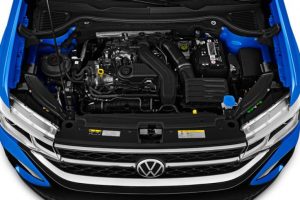 While the Taos is big for its size in terms of passenger and cargo room, it’s smaller than most under the hood.

But it punches above its weight. 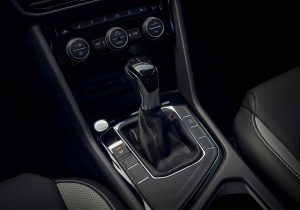 It’s not as much as the 186 horsepower developed by the Mazda’s 2.5 liter engine – which is the largest – and strongest – standard engine in this class.

But have a look at the other side of the ledger.

The little VW four makes almost exactly as much torque as the Mazda’s much bigger four – 184 ft.-lbs. vs. 186 – and it makes it almost immediately, at 1,750 RPM vs. at a much higher 4,000 RPM. This being a function of the VW’s four being fitted with a turbocharger while the Mazda’s four isn’t.

More specifically, of it being a variable geometry turbocharger. This being an interesting take on the turbocharging idea.

The pressure of the exhaust stream that drives the turbo – and eventually produces the boost in a conventionally turbocharged engine – is increased at low engine RPM – when there isn’t as much exhaust flow, yet – by changing the angle of the vanes within the turbo. 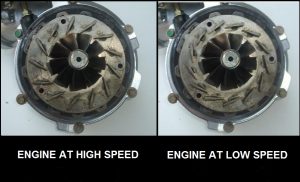 It works kind of like variable pitch propellers used in many aircraft to adjust the airflow.

It provides the same low-RPM boost achieved by twin scroll turbos used by other makers of turbocharged engines such as BMW that scavenge the exhaust pulses of individual ports that are actively exhausting rather than – as was formerly usual – waiting for the exhaust gas pressure to build from all of the exhaust ports, together. Which formerly meant a moment or two before sufficient exhaust pressure developed to spin the turbo’s internals and make the boost that results in more horsepower – and torque. 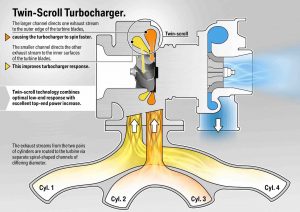 By snugging the turbo as close as possible to the exhaust ports and channeling the exhaust gasses of actively exhaling exhaust ports – or altering the geometry of the vanes within the turbo – the lag formerly associated with turbocharging is greatly diminished while low-end power production is greatly enhanced.

Formerly, they were for the most part high-performance engines. Because they were peaky engines, defined by a sudden rush of boosted power – which came after a lag in power. This was desirable in a performance car because it gave the car character – a wild side. But it wasn’t as desirable in a day-to-day car, where peaky power delivery is a problem. 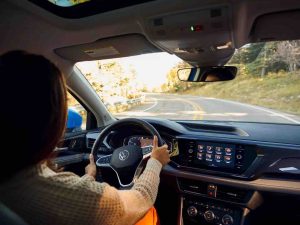 The Taos scuttles to 60 in about 7.4 seconds – which puts it at the top of its class. The Kia Seltos – with its standard 2.0 liter engine (and no turbo) takes about 10 seconds to reach the same speed; the Honda HR-V (which comes with only the 1.8 liter engine) takes about 9 seconds, which is about as long as it takes the base-engined Subaru Crosstrek.

Another plus in the VW’s favor is bigger mileage, a function of is smaller engine.

The manual-equipped Crosstrek only manages 22 city and 29 highway – but it is available with a manual. (AWD is also standard).

Everything else in this class is only available with an automatic, including the Taos.

But, the VW’s automatics – plural – are not continuously variable (CVT) automatics, as are the Crosstrek’s optional automatic and the Honda HR-V’s only automatics. CVT automatics aren’t popular with some buyers on account of their lack of shifting in favor of ranges, varying. It doesn’t feel right to some – and some don’t like the usually greater driveline noise that often comes with CVTs, which hold the engine in a higher RPM range when accelerating.

The front wheel drive Taos comes standard with an eight speed automatic while models with equipped with 4Motion AWD get a seven-speed dual-clutch automatic. Both shift but the dual clutch box can shift faster, for a sportier feel. 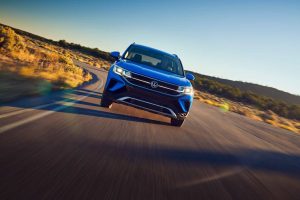 While you can get more power in some of the others in this class – most notably the Mazda CX-30, which is available with a 250 horsepower turbocharged engine (the strongest available engine in the class) the Taos has the most most powerful standard engine – and the best standard performance.

Which feels like even more than it is, courtesy of the almost-immediate torque peak summoned by the variable geometry turbo.

It’s diesel-like in that it’s not necessary to rev it to get the Taos going. But it doesn’t cost as much as a diesel, either to buy it or to fuel it.

Diesel now costs significantly more than regular unleaded gas – which is all you’ll need to feed this VW, since it does not require premium unleaded gas fuel to make its maximum advertised horsepower or torque (the Mazda’s turbo-boosted optional engine does need it).

Over the course of a weeklong test drive, the tested Taos approached 40 on the highway when driven moderately, at 65-70 MPH. Which reminded this reviewer of the no-longer-available TDI diesel engines VW used to offer that always delivered better-than-advertised MPGs.

It’s sad that VW was practically crucified over the hugely over-stated “cheating” on government emissions certification tests, which didn’t amount to a hill of beans in terms of befouling the air we breath.

VW’s diesels were not “dirty.”

They were too efficient.

A TDI-powered Jetta or Golf could – did – exceed 50 MPG on the highway, which was nearly as efficient as a hybrid car and much more affordable (and practical) than an electric car.

And that’s why they had to go.

But VW has brought them back – in a sense. This little variably-turbo’d four in the Taos will cost you about the same as what a TDI-powered Jetta used to cost, before it got banned. While it might not give you 50-plus MPG, it won’t cost you 30 cents more per gallon to fuel it, either.

It’s also nice – per what was mentioned earlier – about the Taos not being afflicted with a CVT automatic, especially since its gas mileage numbers are better than those of its CVT-equipped rivals.

But drive both automatics before you decide which to buy. 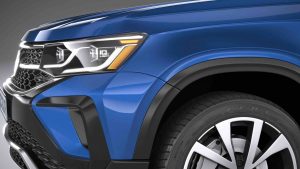 The standard eight speed automatic may not shift as quickly as the seven speed dual clutch automatic that’s standard in 4Motion-equipped versions of the Taos – but it shifts more smoothly. Dual clutch automatics are designed to make gear changes almost instantaneously, which enhances the sporty-snappy feel of a vehicle.

But not everyone likes sporty-snappy.

Gas mileage also goes down some in models equipped with the seven speed automatic, to 25 city/32 highway – though to be fair that is probably mostly due to the additional 200-something pounds of curb weight that comes along for the ride, courtesy of the 4Motion AWD. 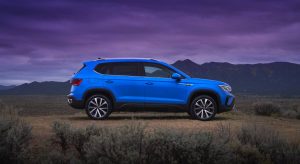 Nothing stands out, especially, about the appearance of the Taos. It looks pretty much like the Tiggy, with some slight tweaks here and there intended to be evocative of the Atlas, VW’s biggest crossover, period.

The differences are inside. 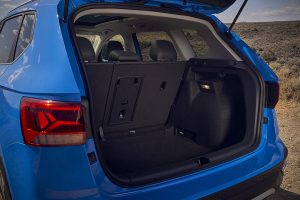 The Honda HR-V come closer, capacity-wise (each of them within about 3 cubic feet of the VW in both categories) but lacking the VW’s punchier standard performance and the VW’s top-of-its class gas mileage. 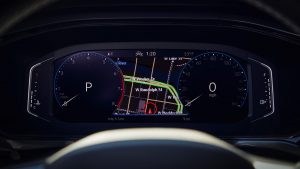 Some other things that set the Taos apart are its standard digital instrument cluster – a feature formerly offered only in much more pricey VWs, like the Tiggy SEL R-Line. Detracting from its otherwise attractive roster of features-for-the-money is that the base S trim comes with a mere four speaker stereo.

To get six speakers, you have to move up the food chain to the SE, which also comes with two other features that ought to be standard in a 2022 model year anything – AppleCarPlay and Android Auto.

One thing that’s not standard – and be thankful for it – is VW’s suite of driver “assistance” technology, styled IQ Drive. If you want your driving to be “assisted” by such things as Forward Collision Mitigation, Lane Keep Assist and even an “emergency assistance” feature that will stop and park the car and engage the hazard blinkers if the car decides you’re not “responsive” enough to drive – you are free to buy the IQ bundle, which adds $995 to the cost of a Taos. 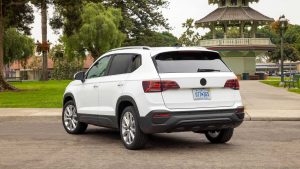 But you are free to skip this cost – and the “assistance” – which is almost enough to justify buying a Taos, all by itself.

This newest VW stands out from the pack.

It might stand out too much for the Tiggy’s good, too.