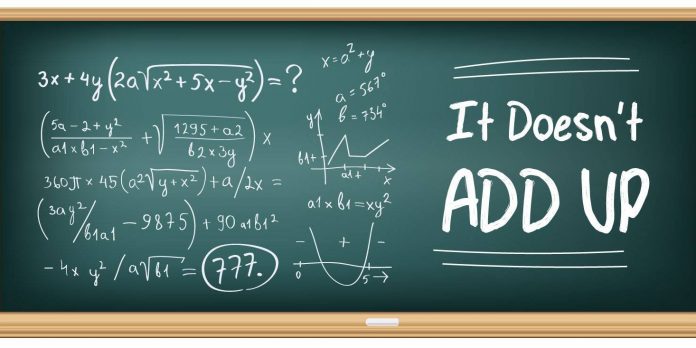 A good way to think about what they’re trying to take away from us is to consider what ten gallons of gasoline weighs.

The figure is about 63 pounds, each gallon weighing just over six pounds. That 63 pounds of liquid energy will power a piston-engined car that averages 30 miles-per-gallon about 300 miles.

A standard issue Tesla Model 3 goes about 263 miles on the solid-state energy contained in more than 1,000 pounds of battery pack. To put this in liquid-energy equivalent, 1,000 pounds of gasoline would be about 158 gallons of regular unleaded. That quantity of fuel would be enough to power the 30 MPG piston-engined car in our example above some 4,740 miles.

Which is more “efficient”? 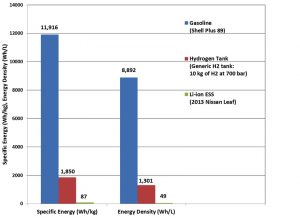 Interestingly, it the piston-engined car also travels farther as it consumes the liquid energy it carries, because it carries around less weight as it burns up its fuel supply. The electric car, on the other hand, is just as heavy when it is fully charged as it is when it is fully discharged.

There is also no “energy penalty” for storing liquid energy. So long as the tank isn’t leaking, there won’t be less energy available when the piston-engined car’s owner wishes to drive somewhere – even if he left the car sitting for a month after having pumped in those 10 gallons. They do not evaporate or become less energy-dense. The tank requires no energy to preserve the energy it contains.

Electric car batteries, on the other hand, consume energy even when their energy isn’t being used . . . to power the car. But it is necessary to power the heater that maintains the temperature of the battery, which must be kept above a certain threshold in order to avoid damaging it and to maintain its capacity to receive a charge. Which it will require, after sitting for a month – unless it was hooked up to a charger, using energy that way. 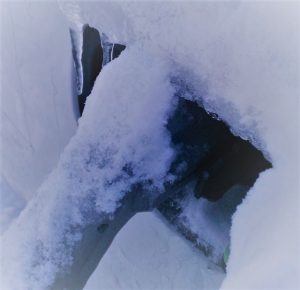 More so, if it’s very cold out.

It is cheaper to charge up an electric car than to refuel a piston-engined car.

But is it cheap enough to make up for the cost of the electric car, itself? 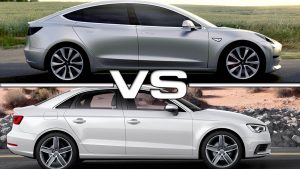 To travel the same distance as the A3, the Tesla would have to receive an additional $5 or so of kilowatt-hour-equivalent energy, bringing the savings down to about $31 to travel roughly the same distance per charges in the Tesla vs. tankful (singular) in the Audi.

It works out to about $124 per month in the the Tesla’ favor. But only in isolation. One cannot ignore the other cost difference – the $8,090 additional that the Tesla cost vs. the Audi. It will take about six years of driving to “work off” that sum ($124 times twelve months equals $1,488 times six years equals $8,928).

The costs of recharging also varies – depending on the power demands of the battery pack in the particular electric car. As in the example above of the cost of charging up the base vs. optional-battery’d Tesla.

A Tesla 3 with the standard 50 kilowatt-hour battery costs about $10 to recharge; equipped with the upgrade 82 kilowatt-hour battery and the cost to fully recharge goes up to about $14. And of course, the higher-powered the electric car is, the more power it uses. This is of course true of higher-powered piston-engined cars as well; however, they all cost exactly the same to fill with the same volume of liquid energy. 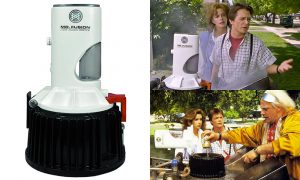 But the electric car can be recharged at home. This is said to save time, which is a way of saving money. The problem here is how much time it costs to recharge the EV at home.

The perception of this time can be made favorable if it is convenient to recharge the car while you sleep, overnight. But if you need the car before it has had time to charge up it can be extremely inconvenient.

Finally, the electric car us said to save the planet. But this assumes, first of all, it needs “saving” (like people needing “vaccines”) and that it can be “saved” by driving cars that use more energy than the cars they mean to replace. There is a great deal of energy tied up within 1,000 pounds of one one electric car’s battery pack – and it takes an enormous amount of energy to power up that battery pack. It will take an almost inconceivable amount of energy to power up millions of 1,000-plus pound EV battery packs.

Until the arrival of Mr. Fusion, electric cars aren’t “saving” anything – whether in terms of dollars or the planet.