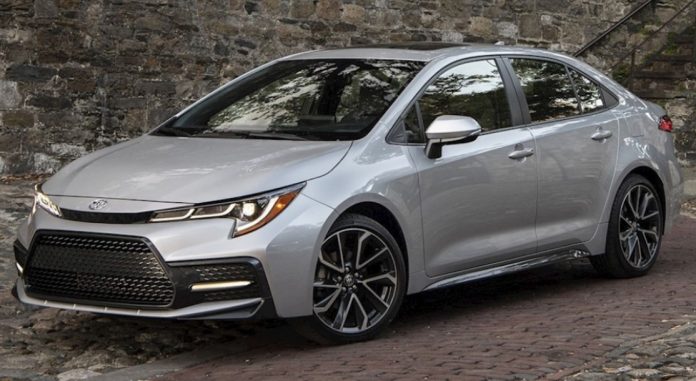 When you hear that the average price paid for a new car last year was more than $35,000 – and hear that average price of an electric car is higher than that – it’s welcome news to hear about a car like the Toyota Corolla.

You can buy one of these for just over $20,000 – which is about half the price of an entry-level electric car.

You won’t have to pay extra to go farther, either. The Corolla comes standard with more than 500 miles of highway range (about 400 in city driving) and you can still get it with a manual transmission, which is almost as surprising as finding a gas station that sells unleaded for less than $2 per gallon.

There are a few other things about the Corolla that make it stand out in the crowd – including the fact that there isn’t much of a crowd anymore. This car is one of the few new sedans you can still buy – the rest having gone over to being crossovers.

The Corolla is a compact-sized sedan, a species of car that’s getting rarer and rarer as crossovers become the dominant type of “car” being sold.

Crossovers have their merits – including more room inside for their size – as well as (usually) standard or at least available all-wheel-drive. But none of this is free and it’s one of the reasons why “car” prices have been going up.

The Corolla – which is still a car – stickers for $20,075 to start for the base L trim with a 1.8 liter engine paired up with a continuously variable (CVT) automatic transmission. For reference, Toyota’s least expensive crossover, the C-HR, stickers for $23,880 to start – and it’s not available with a manual transmission. 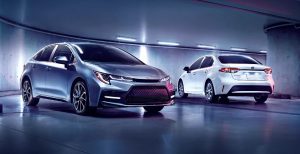 A top-of-the-line XSE Apex trim with the 2.0 engine, CVT automatic, sport-tuned (and lowered) suspension plus unique exterior and interior trim lists for $28,630 – still about $7k less than what most people paid for a new car last year.

Very little – which is very good.

Part of the reason for the Corolla’s enduring success as the best-selling small car, ever – even more so than the VW Beetle, original model – is its conservatism. Toyota keeps what works and rarely makes major changes that might not.

The Corolla remains a kind of  lifebuoy of constancy in a sea of change and uncertainty.

Its reputation precedes it. Corollas hold their value almost as well as silver and gold.

Engine and transmission choices – as opposed to the usual take-it-or-leave it “choice.”

Base L trim has all the essentials. No need to spend more than about $20k for a well-equipped car that’s big enough to be viable as a family car.

Manual is only available with the optional 2.0 liter engine – and it costs extra.

More engine is available in rivals like the Mazda3, Hyundai Elantra/Kia Forte and Honda Civic. 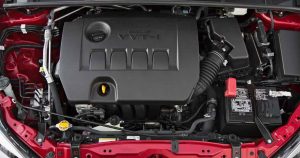 Corolla’s conservatism shows in its standard 1.8 liter and optionally available 2.0 liter four cylinder engines – neither of which are turbocharged. All of the others in this class offer turbocharged engines – some with as much 276 horsepower, as in the case of models like the Hyundai Elantra N-Line.

The Corolla’s maximum-effort 2.0 liter engine summons 169 horsepower. The standard 1.8 liter falls back to 139 horsepower. But power and performance aren’t what sells the Corolla.

Anvil-like reliability over the very long term does – and has. There is no other small car on the market – with the next-closest exception of the Civic – that has an earned reputation for being a 20-year-and-then-some car.

They just keep going, as long as you keep putting gas in them. 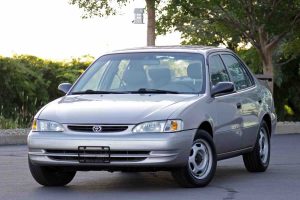 And a big part of the reason why is because their engines don’t have turbochargers  – which apply pressure to the engine’s internals, almost guaranteeing they won’t go 20-years-and-then-some before something expensive wears out or breaks. That is the price of all that power and performance. Toyota also sticks with proven engines for a long time before “updating” them in any major way.  The current model’s standard 1.8 liter engine is closely related to the 1.8 liter engine that came standard in the 2000 Corolla – and that was 22 years ago.

It is part of the reason why it is common to see Corollas from 22 years ago still in service as daily drivers. How many Neons and Cavaliers that age have you seen recently? That still run, at all? 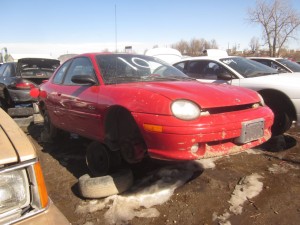 You can also get the Corolla with that larger, 2.0 liter engine – which wasn’t on the table back then. Its 169 horsepower can be paired with a six speed manual transmission – which, unfortunately, is not available with the 1.8 liter engine. Even with the horsepower bump, the Corolla so equipped rates  28 city, 36 highway – a negligible difference in mileage vs. the standard 1.8 liter/CVT combo. 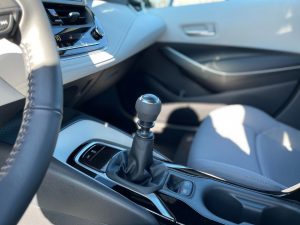 Some of the others in the class come with more standard engine – or more available power, as in the case of the Elantra and the Mazda3. They kind of have to, in order to offer something to counterbalance the Corolla’s unassailable reputation for being the sure bet, if what you want most isn’t so much a car that will get to 60 the most quickly but rather a car that will keep on going, practically forever.

It’s a little weird driving a car amid all the crossovers on the road. 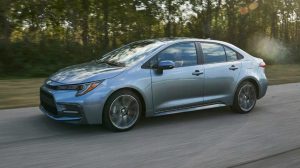 But there are advantages. While it’s true you sometimes can’t see around the crossover ahead of you – or beside you – your car is almost certainly more agile than that crossover ahead of or beside you. Cars – being lower to the ground – are also usually more stable in their handling, especially when the steering wheel is turned sharply or the brakes applied firmly.

The Corolla has those advantages – plus a few more that apply to it, specifically.

That available manual transmission, for instance. No new crossover is available with one. This makes it fun to drive in a way no automatic-only anything can be – no matter how powerful its engine may be. It also gives the driver an extra measure of control over the car that is absent when the transmission has control over the shifting.

If you haven’t driven a manual-equipped car in a few years and have memories of stiff or abrupt clutches, a drive in the six-speed Corolla will be a revelation. The clutch is both light and communicative; it transmits a clear sense of engagement as you let it out without the all-in (or all out) grabbiness some clutches sometimes have. Very easy to drive this Toyota in stop-and-go traffic – and very much more enjoyable to drive it when traffic dissipates.

It’s a shame Toyota doesn’t let you get the manual with the standard 1.8 liter engine, though. Particularly because it might result in the most fuel-efficient Corolla combination. The CVT automatic you get with this engine allows the combination to tout the highest mileage – but it’s only about 2 MPG better overall than the stronger/larger 2.0 engine delivers with the six speed manual. With less engine – and the efficiency advantage of a properly shifted manual – the Corolla could probably manage 40 on the highway.

And it’d be more enjoyable to drive as manuals always make a car with a small, not very powerful engine more fun to drive. 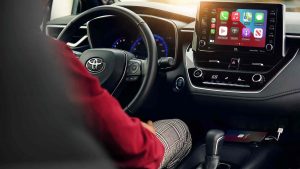 Pleasantness is. Well, in addition to knowing the car you just bought is probably the last car you’re going to need to buy for the next 20-plus years.

Which is also very pleasant.

The Corolla is like a favorite pair of shoes – the ones you always want to wear. No surprises, a companion for your travels that always makes your travels uneventful – another way to describe pleasant.

This quality manifests in a soft, quiet ride that will make you feel you bought more car than $20k generally buys. In sensibly ergonomic controls like the dial-type knobs for adjusting the volume and station tuning of the audio system – as well as the temperature and fan speed controls. 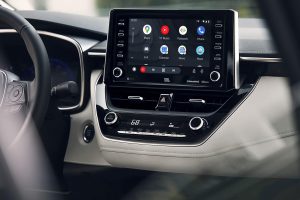 There is a touchscreen – but it has a sensible combination of push-button controls to access the various functions, which are displayed on the screen. This is a much easier-to-use (while driving) system than trying to accurately tap/swipe a completely flat screen without any tactile buttons to push.

The higher trims – like the XLE and XLS – are practically posh, with soft leather seat covers and dash trim. And if you want a little more excitement, the new Apex edition takes the sportiest SE trim (with the 2.0 engine and available six speed manual) and adds to that with a lowered suspension and an 18 inch wheel/tire package.

But underneath all that it’s as pleasantly, comfortably Corolla as ever. 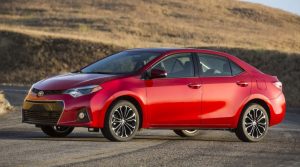 It is the least dramatic-looking of all the cars in this class, especially relative to the Mazda3 – which is the supermodel of the bunch. Heads will not turn when you roll up in your new Toyota.

But looks aren’t what sells the Corolla anymore than power/performance. The others in this class have to rely on those attributes  . . . to get people to look at what they’re selling.

The Corolla sells itself.

Nominally, it’s a compact-sized sedan, 182.3 inches long – which is about the same length as others in the class like the Mazda3 sedan, the Hyundai Elantra (and its Kia-badged cousin, the Forte) and so on. 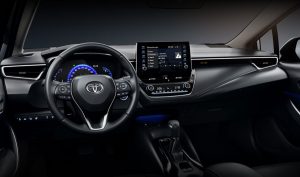 But actually – where it counts – the Corolla – and most of its rivals – approach the size of mid-sized sedans. Or at least, the room inside of them. This is a secret the car companies would rather you not know about. 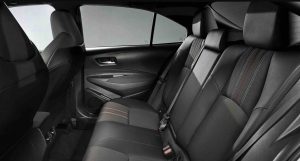 The point here is that the Corolla is close enough where size matters (inside) to be considered a viable alternative to a nominally mid-sized sedan like the Camry. It might be worth a thought given the Camry’s starting price – $25,295 – is about $5k higher than the Corolla’s. How much is 3 inches more backseat legroom (and 1.9 cubic feet more trunk space) worth to you?

More evidence of the Corolla’s sensibility can be seen in what you don’t get with this car – unless you want it.

The one less-than-sensible thing you’ll find inside this car is an electric push-button parking brake rather than the tried-and-true pull-it-up parking brake lever. Its elimination does free up center console space but it also means the elimination of a simple mechanism that usually works without fail for 20-plus years (and if it does ever fail is very easy to fix – because it’s not electronic).

You know a car has achieved greatness when the only criticism you can come up with is that it no longer has a pull-up emergency brake lever.