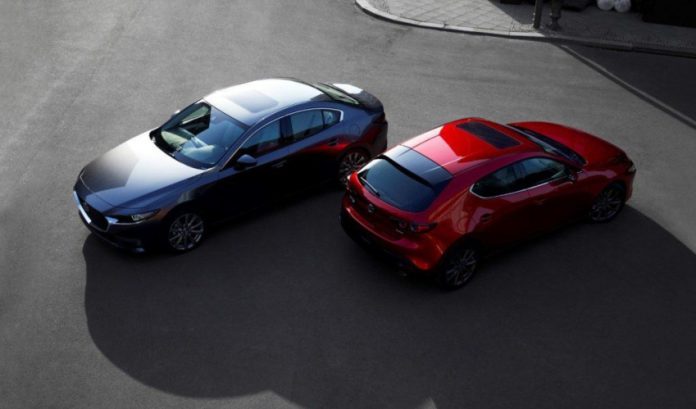 Small sedans are less “in” than they used to be. Which may be why Mazda offers its smallest sedan – the 3 –  another way.

You have your pick of sedan – or five-door hatchback. Both are essentially the same 3 – presented in two different forms. One costs less – and has less room, for cargo – because it’s a sedan and has a trunk. The other costs a little more – and gives you more room for cargo – because its got a hatchback rather than a trunk.

It’s also available with a manual transmission – and all-wheel-drive. The sedan offers AWD, too – but not the manual. But you pay less for it – including with AWD.

As the saying goes, you pays your money and you takes your choice! 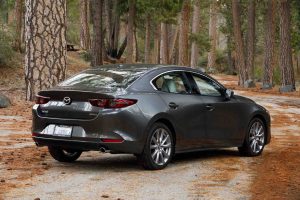 The Mazda3 is a compact-sized sedan – or five-door hatchback – that competes with others in the class such as the Toyota Corolla, Honda Civic and Hyundai Elantra. It emphasizes style and athletic handling, along with the option to pick the body-style that suits you.

Plus some other things.

Both versions of the 3 are also available with a turbocharged version of the 2.5 liter engine that is the second-strongest available engine in the class.

And the strongest you can get in this class . . . in a hatch.

You can get AWD either way, too.

As well as a manual transmission – with the hatch (but not with the sedan).

A top-of-the-line Premium Plus version of the hatch (with the 2.5 turbo engine and AWD) stickers for $34,400 but you can get the same drivetrain, sans the hatch, for $33,100 if you choose the sedan version of the 3. 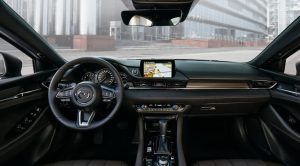 For the 2022 model year, Mazda has added a Carbon Edition to the roster of options. It is chiefly an appearance package that bundles gray exterior paint with black exterior accents and red leather-trimmed interior. If you choose this option you’ll also get an upgraded 12 speaker Bose premium audio system.

Choose your style – and your price.

One of the most enjoyable to drive cars in the class.

LCD interface for the audio system is fussier-to-use than rivals’ systems.

Outward visibility in the hatch is less than in the sedan. 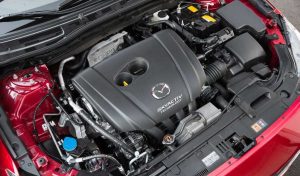 The sedan version of the 3 comes standard with a 2.0 liter four cylinder engine that makes 155 horsepower; it’s paired exclusively with a six speed automatic transmission and front-wheel drive.

Optional – in the sedan  – and standard in the hatch – is a larger, 2.5 liter engine that makes 186 horsepower, making it one of the strongest optional (and standard) engines in the class.

It’s available with a six speed manual transmission – in the hatch.

Or you can choose the optional six speed automatic, which is standard in the sedan. Which is automatic-only. Why Mazda limits the availability of the manual to the hatchback probably has something to do with that version of the 3 being perceived as the sportier version of the two (Honda also offers the Civic with a manual – but likewise, not in the sedan.) 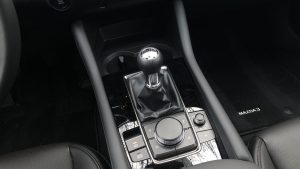 But the upside is, it’s available.

And there’s another upside, too.

The automatic that’s available (and standard, in the sedan) is also a six speed transmission. Read that again. Six gears – not eight or ten of them, like many current automatics. Why is having fewer gears an upside? Because it means fewer shifts and less constant shifting, which means a less “busy” transmission and also one that will probably last longer, being simpler.

Automatics with eight or nine or ten speeds have multiple overdrive gears, each designed to “step down” engine RPM and to allow for a very deep final overdrive gear, without lugging the engine on the way there. All of this provides a slight fuel economy benefit, important not so much to you, the buyer, but to the company trying to sell you the car – and “comply” with government fuel-economy mandatory minimums. 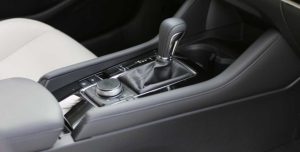 That’s also why so many cars in this class that have automatics have continuously variable (CVT) automatics, with no gears at all.

But how much is gained, MPG-wise?

It’s a difference – but not an epic one.

And while gas prices are becoming more of a concern with every passing day – Let’s Go Brandon! – another relevant concern is the durability/longevity of CVT and multiple-overdrive automatic transmissions. Their track record isn’t nearly as good as that of simpler automatics with just six gears – and no metal bands to fatigue-snap, as sometimes happens with CVTs.

This is especially relevant given the replacement cost of any modern automatic transmission, which is generally on the order of $3,000 or more. That being especially relevant when we’re dealing with economy cars, which are worth less than other cars after eight or ten years because they cost less to start than other cars, when they were new. It’s not favorable math when you have  a ten-year-old economy car with a retail market value of $6,500 that needs a $3,000 transmission replacement.

Mazda also offers all-wheel-drive as an option – in both the hatch and the sedan. But only with the automatic transmission. 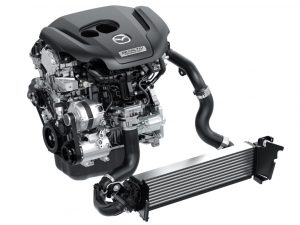 There’s one more engine option, too.

If you want to own the strongest – and quickest – hatch in this class, choose the turbocharged version of the 2.5 liter four cylinder engine.

Feed it premium unleaded and the computer will dial up maximum boost – and 250 horsepower. That’s 50 more horsepower than the maximum-effort Honda Civic Si offers (200) and which is only offered in the sedan version of the Civic.

The N version of Hyundai’s Elantra offers more horsepower (276) but – like the Civic – only in sedan form.

Which means you get more power – but less practicality. 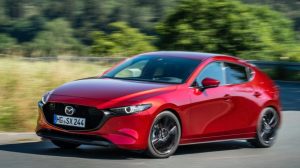 Economy cars used to be just that. They got good gas mileage – and they didn’t cost you much.

The 3 is more than just that.

It is economical – and enjoyable. Especially the hatch, because of its very strong (for the class) standard 2.5 liter engine and the available manual transmission to go with it. This engine likes to rev – peak horsepower is achieved at 6,000 RPM – and the manual gives you full control over it.

On the downside, outward visibility is not-so-great in the hatch; the side glass is short relative to tall doors while the hatchback shape narrows the view to the rear. The view of the outside world from inside the sedan is much better, in part because there is more side-glass area (especially as regards the rear door glass, which there is more of than the driver/passenger side door glass) and the larger rear glass. 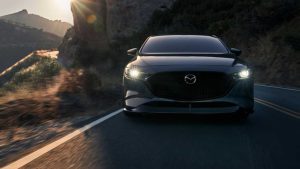 This is harder than it looks.

To reduce body roll and sharpen up steering feel is easy; you just cinch down the suspension and slap on some short-sidewall tires. But it’s not so easy to tamp down the reverb effect of pothole strikes and road noise/drone from those short-sidewall tires and not have a car that rolls in the curves.

Mazda gives you the handling without the beating-up better than an anyone else. 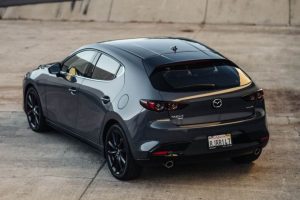 The hatch offers more practicality – more than three times as much space for cargo (47.1 cubic feet) than the sedan (13.1 cubic feet) at the price of some visibility – per above comments.

The hatchback layout not only offers more space, it opens up the space available. The opening is wider and you can use the entirety of the car’s interior to fit things that would never fit in the sedan.

On the other hand, if you don’t need the extra space – and prefer not to pay for it – the sedan’s got you covered. The increased visibility’s free, too. 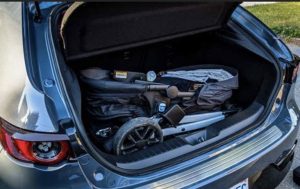 Both versions have the same very generous driver/front seat passenger legroom (42.3 inches) and par-for-the-class 35.1 inches of legroom for the backseat riders.

The interior layouts are also the same – which is good, because Mazda excels at designing interiors that are smart-looking and functioning. The 3 has a Miata-like main instrument panel with round, analog-style gauges that are electrically back-lit. They are easy to read at a glance and do not distract you with gadgetry that may look good on the showroom floor but isn’t so good in terms of keeping your eyes on the road. 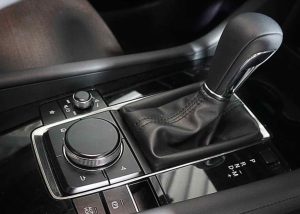 The one departure from this otherwise appealing ensemble is the interface for the stereo and some of the other controls – but thankfully not the climate controls. The AC/heat/fan are controlled by straightforward knobs and buttons that can be used by feel or at a glance. But the stereo is controlled by a rotary mouse-thing on the center console that you push to select things after moving it left-right/up-down to select other things. It makes a simple thing like changing the station not-so-simple.

It’s the one thing about this car – sedan and hatch – that isn’t better than what the competition offers.

This “economy” car comes standard with rain-sensing wipers, LED headlights, adaptive cruise control, remote vehicle monitoring and an eight-speaker stereo rig. There was a time – and not so long ago – when you had to buy a Cadillac or a BMW to get such equipment.

You can also get multi-stage heated leather seats, adaptive headlights that follow the curves and a 12 speaker audio system. The one thing you can’t get is a diesel engine – the engine which Mazda had planned to offer by now in several models, including the 3 – but which is off the roster, probably forever, on account of the federal government’s regulatory insistence on more than partial zero emissions (PZEV). This is a standard which no diesel engine can “comply” with and which a dwindling number of gas engines can comply with. Which is just what the regulations are meant to do – in order to make it all-but-impossible to build anything that isn’t a “zero emissions” electric car – in air-fingers-quotes to emphasize th fact that EVs aren’t that.

It’s a shame about the limited availability of the manual – but green lights as far as just about everything else!