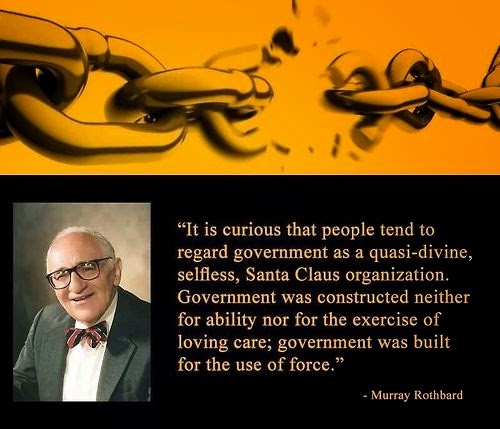 Government is force, it’s said – By Washington, among others – and this is true. But it is also something else. Something worse than mere violence, which at least has some animal vitality behind it.

Government is the refuge of failure.

It is the construct which failures use to pretend to themselves that they aren’t failures – by forcing them on others, having been unable to persuade people of the merits of whatever it is they consider to be a grand idea. The fact that these failures must force their ideas – they are usually styled “plans” – on the unwilling is a confession of the worthlessness of the idea or “plan.” 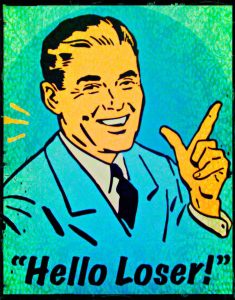 This does not, of course, mean the “plan”or idea is worthless – to the ones who are able to extract a benefit, using force. It simply means he idea or “plan” has “worth” in the same way that the $100 bill that is now in the pocket of the man who stole it from you has worth. He can use it to buy the same one hundred dollars’ worth of goods and services that you would have used the bill to buy . . . had it not been stolen from you.

But it does not detract from the fact that the man who stole it from you is a worthless thief who zero-summed the money. You would never have given the money to him voluntarily.  He was unable to persuade you that it would be of benefit to both of you to give him that $100 – in exchange for something of at least equal or more value. He had nothing of value to exchange with you. So he had to resort to the degradation of forcing you to hand over the money –  the violence of the failed.

It is why thieves are held in contempt, even when feared. And for the same reason this thing styled “government” and all of its unwanted – by its victims – manifestations. The relationship being that of the man mugged and the mugger. A zero-sum game writ large and made “official,” in order to do the one thing the mugger – to his credit – never does, that being to pretend he is something better than a thug.

Even the oiliest TV evangelist operates on a higher moral plane than government because no force is involved in the fleecing. The sheep are willingly (or at least, freely) shorn.

Government threatens the use of force if you do not hand over a great deal more than $100 (and not just this once, as the mugger does) in order to finance what it styles “essential” services. But “essential” – to whom? Clearly, they are not essential to those who must be threatened in order to force them to pay for them.

The absurdity is self-evident.

The utility which provides the electricity that runs your refrigerator and keeps your lights lit is an essential service, the fact established by the willingness of people to pay for it and also by the nonexistence of any threat that says you will pay for it – or else.

The same principle applies to food and clothing as well as limitless variety of things we simply want to have or use and for that reason are willing to pay someone else to provide.

There is no threat implied – or applied. 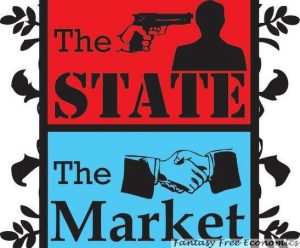 A thing is esteemed on its merits – and the willingness of people to pay for it the measure of its success. The free market is the field upon which winners play. Government is the flophouse of the failed. The place where losers go to nurse their grievances, which arise in the minds of people who cannot accept that they were unable to persuade others of the merits of their ideas.

Dangerous losers, who believe that their ideas and “plans” really do have merit; people are just too stupid or “selfish” to see them.

They must be forced to accept them.

For the psychopathic personality, this has natural appeal – psychopaths being defined in part by their need to control other people. When people are free to say no, they are that much harder to control. Therefore, use the attribute which defines government – force – to get them under control. 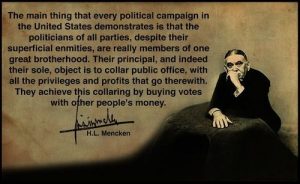 This is a much more sophisticated form of control than that exercised by the mugger in a back alley, who points a loaded gun at your belly and says, hand over your wallet. The transaction is honest, in a sense, because both parties understand what is going on. The mugged knows he is being mugged and feels disgust and contempt for the mugger. The mugger, for his part, is aware he’s a mugger and probably at some level is ashamed of it. He at least does not make any attempt to persuade the person he’s mugging that he is really helping him, or providing an “essential” service.

This serves to keep the mugger in check, as objective reality (like gravity) usually does.

But the psychopathic personalities who have acquired titles such as “president” and “senator” and “congressman” consider themselves public servants – an interesting choice of words given the nature of the relationship – who are full of grand ideas and “plans” that are so very grand and good they must be forced on people. Or at least, upon the people who do not consider them grand or good, for the benefit of those who do. 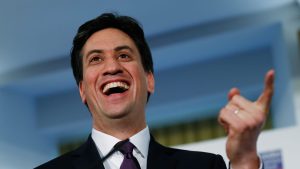 It is why, as the great sage H.L. Mencken so incandescently styled it, every election is a kind of advanced auction of stolen goods. With the “president” or “senator” or “congressman” as the auctioneer.

Some will say – but without government there would be a free-for-all of violence! As if that were any better than its legalization.

Honest folk stand a much better chance against the street mugger than they do against this things styled government -and its legions of muggers, all of whom think (or pretend to think) they aren’t muggers and thus filled with the ugly zeal of the mentally deranged self-righteous.

A street mugger is saner and far more noble – if that’s the right word – because at least he has his head screwed on straight. He’s not lying to himself – or to you.

And he certainly isn’t asking for your vote.