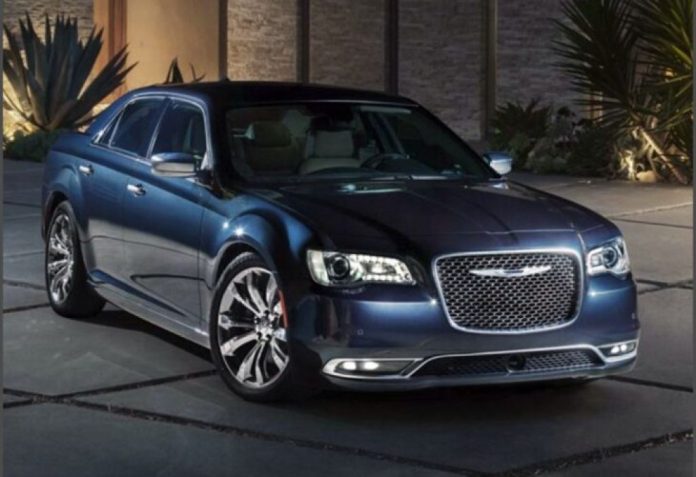 Chrysler – the luxury division of Dodge – is down to just two models on offer. One of them probably won’t be around for very much longer.

That model is the Chrysler 300 sedan – and once it’s gone, there won’t be very much left of Chrysler.

Perhaps – if you’re still interested in the type of car the 300 still is.

While it still is.

The 300 may well be the last Chrysler – at least insofar as cars. The only other vehicle in the current Chrysler lineup is the Pacifica minivan.

It will almost certainly be the last Chrysler available with a V8 engine.

The same fate awaits the car the 300 shares its platform – or basic underlying layout – with. That one being the Dodge Charger. Both are mid-sized sedans that are larger than other mid-sized sedans in the same price class – including models such as the Toyota Camry and Avalon, the Honda Accord and Hyundai Sonata. 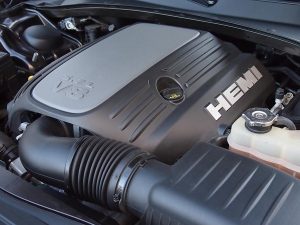 It is uniquely built on the once-common layout for mid-priced American cars. That being rear-wheel-drive (AWD is available, optionally), heavy and big-engined. The smallest engine that comes in the 300 (and Charger) is a big V6, a type of engine that only one other mid-sized/mid-priced sedan still offers – as an option.

That one being the Toyota Camry’s optional V6.

Otherwise, it’s four-cylinders-only  . . . unless you pay extra. As for the Toyota’s slightly bigger (and bigger-engined) sibling, the Avalon. It comes standard with a V6 – and a $36,825 base price.

A Touring L with the same V6 (and the same option to buy AWD) but with standard heated leather seats, 20 inch wheels and other upgrades stickers for $36,745 with rear-wheel-drive and $38,995 with AWD.

The V8 version comes only in rear-wheel-drive form. 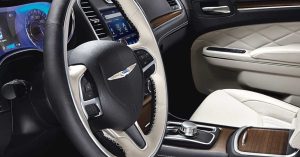 Other than a few minor tweaks of standard/optional equipment, the probably last-of-the-line 300s carries over largely the same as it’s been since its last major update back in 2011. That’s a very good thing, though – if you’d like to be able to buy a new car that’s like it was when when family-priced cars routinely came standard with V8 engines.

Which most mid-sized luxury-priced new cars no longer even offer.

Hunky and solid-feeling. Because it is.

V8 is only available in the S trim, which costs about $10k more to start – before opting for the extra-cost V8.

Relatively small trunk – for its size. 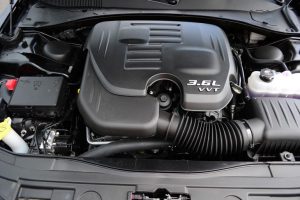 Back in 2011, V6 engines were common in the 300’s class. Or at least, they were available. Rival mid-sized sedans like the Honda Accord, Mazda6 and Toyota Camry all offered them. Fast-forward 11 years and only the Camry still does.

To further make the point, almost every current-year mid-sized luxury-priced sedan – models like the Mercedes E-Class and BMW 5 – comes standard with a four.

Some – like the Jaguar XF sedan I recently reviewed – do not offer anything more than a four.

Meanwhile, the 300 still comes standard with a V6. A big (3.6 liter) V6 that makes 292 horsepower – which is more than the fours that come standard in $55k-plus luxury-priced mid-sized sedans like the BMW 5 Series and Mercedes E-Class. 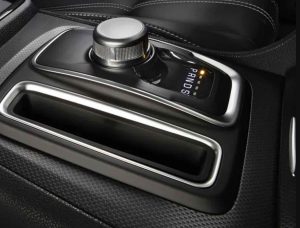 So you’re getting a lot more engine for your money here – both in terms of size and output.

And – interestingly – you’re not getting much less mileage.

The V6-equipped 300 rates 19 miles-per-gallon in city driving and 30 on the highway. A four cylinder-equipped Mercedes E350 rates 23 city and 31 highway. And you also only get 255 horsepower out of its 2.0 liter four.

A new Camry – which also comes standard with a four (and just 203 horsepower) does better: 28 city, 39 highway. But it’s not that much of a difference, especially when you factor in the horsepower difference (89 of them, in the 300’s favor).

However, you cannot get a rear-drive Camry, except in Nextel Cup form (that one also has a V8, but one you can’t get in any Toyota car that you can buy).

Same goes for the Accord and Sonata and for that matter any other mid-sized sedan priced around $33k to start. Mid-sized luxury-priced sedans like the BMW 5 and Mercedes E are rear-wheel-drive but they are also priced around $20k higher to start – with no more than a four under their hoods.

Thus, the 300 stands alone, the last of the vehicular Mohicans – excepting its Dodge-badged sibling, the Charger – which offers the same V8 (and the same rear-wheel-drive layout) for even less ($40,500) to start.

The V6 version’s not far behind, getting there in about 6.3 seconds.

Some of the four-cylinder-powered stuff is just as quick – or even quicker. But to match the 300’s numbers with no more than a four under their hoods, it is necessary to heavily turbocharge (or partially “electrify”) those fours, in order to boost the output of those undersized fours to match the natural output of appropriately sized V6 and V8 engines. That of course means those little fours are under more pressure to deliver their performance whereas the 300’s V6 and V8 engines are under less. 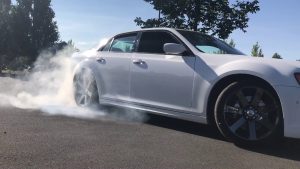 It absolutely correlates with fewer parts.

There are less of them under the 300’s hood – as in no turbo or intercoooler or specialized exhaust plumbing and peripherals. All of them at least potential failure points – in turbo-intercooled cars – that aren’t in the 300.

An eight speed automatic is standard with either engine – but the only engine that’s available with AWD is the V6.

This will probably not matter to many of the people who like and even prefer rear-drive cars like the 300 – who want to be able to slip the rear wheels,  sometimes. 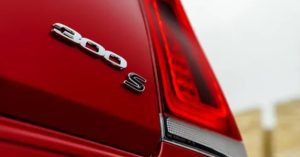 One thing that’s surprisingly small about this big and bold car is its rated towing capacity – just 1,000 pounds. This disqualifies it from pulling practically any trailer. In the past, big American cars with big V8s could pull at least as much as a mid-sized truck – which obviated the necessity of having a truck to pull a trailer.

The 300 (and its Charger sibling) delivers the kind of driving experience Americans once upon a time didn’t have to spend $55k-plus to experience. Because – once upon a time – most American cars were rear-drive cars (and offered V8s). As contrasted – in those bygone days – with foreign cars, which were mostly front-wheel-drive, smaller and much smaller-engined. 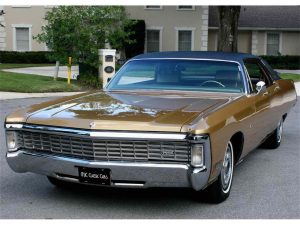 Why are almost all cars now those kinds of cars? The answer is one-word simple:

Or rather, because of government regulations – particularly those pertaining to how much gasoline the car you paid for is allowed to use. It is a concept as bizarre as being told you may only eat so many slices of the pizza you just paid for. Or rather, that the pizzeria will be fined if they sell you more than so many slices. That is a good way to understand the effect of CAFE – Corporate Average Fuel Economy – regulations upon the cars (and engines) you’re allowed to buy. These regs – mandatory-minimum MPG standards – continue to go up with each new year. With each new government decree, as recently decreed by the Biden Thing. Who has decreed that by 2026, all new cars must average nearly 50 MPG.

No V6 can “comply” with that standard. It will be tough for a four. And it is also why much lighter, front-drive-based cars (with four cylinder engines) now dominate the 300’s class. It also why the 300 is going away. Chrysler can no longer achieve “compliance” with a 4,300-plus pound sedan equipped with a V6 – and forget the V8.

But the V8 is glorious. Nothing else sounds – or feels like one. And the heft – of the car – is magnificent. Here is a car with substance, literally. To feel anything like this it is necessary to spend at least $20k more and even then, the feel isn’t the same because even at that price point, what’s under the hood is still pathetically small given what you just paid.

Which is part of the reason why you’ll feel like a king driving the 300 – rather than something less. Your passengers, meanwhile, while feel like they’re riding on a king-sized bed – heated and with an excellent stereo vying with the comforting background rumble of the V8 to make them feel great.  It is a road trip car par excellence – for the driver and whomever’s along for the ride. 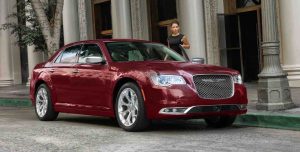 Just as there’s nothing else that’s like the 300 – other than a Charger – in terms of what’s under its hood and its underthings, generally – so also there is nothing else on the road that looks like a 300.

It is immediately recognizable rather than completely forgettable – as is sadly true of most of the transportation appliances being extruded these days. It is brawny and broad-shouldered, unapologetically masculine – another thing that’s few and far between these days.

Yet many women like it, too – for the same reason women like masculine men. It is not a bullying, braggadocious car. Rather, it is confident and authoritative. And everyone likes that. 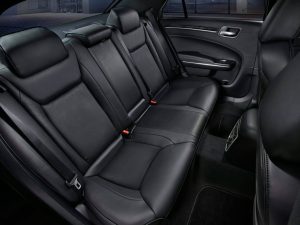 It looks longer than its 198.6 inches, too – because of its extremely long-for-its length wheelbase of 120.2 inches. For reference, a Camry sedan’s wheelbase is just 111.2 inches and even the longer version of the Camry – the Avalon, which is 195.9 inches long – rides on a much shorter 113 inch wheelbase. To get a longer-legged mack daddy, it is necessary to go up a size to full-sized . . . and full-priced. Something along the lines of a BMW 7 or Benz S sedan.

The length – and wheelbase – allows for spaciousness, too. Most noticeably for the backseat passengers, who enjoy 40.1 inches of legroom – two inches (just about) more than in the Camry’s backseat area (38 inches). The longer version of the Camry – the Avalon – ups the ante to 40.3 inches and it is a very comfortable car. But it is not a rear-drive car and while it does come standard with a V6, there’s no optional V8. Plus, the Avalon costs nearly $3k more to start – $36,825. 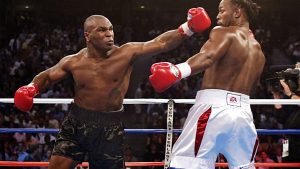 And while it is a very nice car car, it is not the kind of car that get the respect a 300 does as a matter of course. Mike Tyson is very nice, too. But – as with the 300 – there’s also another side of him that causes others to be nice, to him.

You can thank government – rather than blame Chrysler – for limiting the availability of the Hemi V8 to the top-of-the-line S trim. But Chrysler is to blame for limiting the availability of a number of desirable features – such as a full-length panorama sunroof and the excellent nine-speaker Alpine surround-sound audio system – to the S trim as well. If you want the foregoing – as well as a few other features that aren’t available in the Touring and Touring L trims – you’ll have to buy the S to get them.

You can, however, get some desirable features – such a heated rear seats, a heated steering wheel and adaptive headlights – as optional equipment with the Touring L. 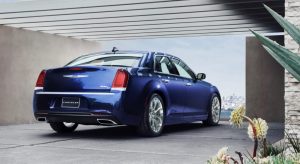 One thing you cannot get with any 300 is a larger trunk. All 300s have the same 16.3 cubic-footer. It’s not a small trunk – but a bigger trunk to match the rest of this larger-than-life car would complete the picture, of a time when Americans could buy cars as large as today’s SUVs, with engines and trunks to match.

It is sad – tragic – that average Americans will very soon no longer able to buy American cars like the 300 and its Charger sibling.

Which means you ought to hurry.