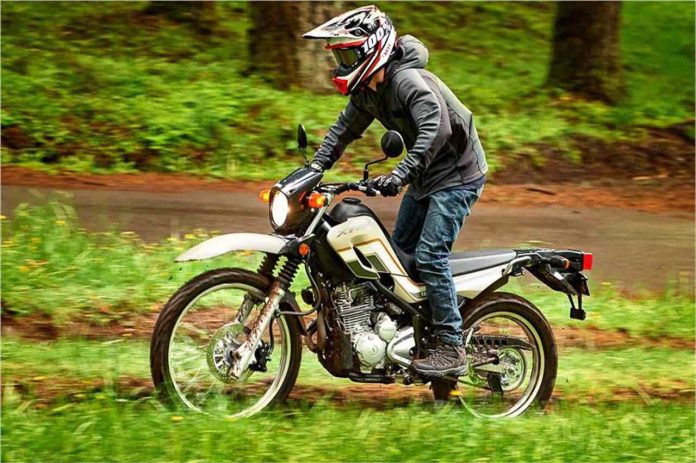 There is an exception to the rule about not spending money in order to save it. That exception is the two-wheeled alternative to four-wheeled transportation.

Buying one can cut your cost to get there and back in half or more, as many bikes use half as much gas as most cars do. Some only use a third as much. As an example, if you are driving a car that averages 30 MPG – which is pretty good for a car – and that car has a 15 gallon gas tank that you fill up once a week, it costs you about $60-$65 at current gas prices (about $4.20 per gallon, which the Biden Thing expect us to be grateful for) to drive your car each week. 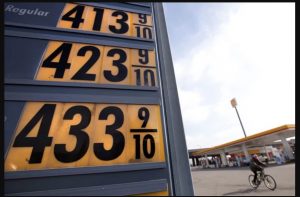 A motorcycle that averages 60 MPG that has a 4.5 gallon tank costs about $19 to fill up. You’ll have to fill it up more often, but you’ll still be way ahead – especially over time, as those savings add up quickly. They add up even faster if you pick a bike that averages 80 MPG or more, which brings up the answer to the question posed by the headline to this article. 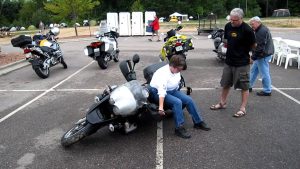 This is a type of bike that has a lot in common with a dirt bike, which is a type of motorcycle that’s very light and minimalist, designed that way to be almost as easy to manage off-road, on dirt trails and so on, as a bicycle. The typical dirt bike only weighs a couple hundred pounds, which matters a lot off-road because when you drop it – as you will, if you ride off-road – you will be able to pick it up. Many street bikes weigh more than 500 pounds; some close to 1,000. That is not easy to pick up and it also makes such bikes more susceptible to being dropped, because once they list beyond a certain angle, it is common for the weight to get away from the rider, as during a low-speed U-turn. 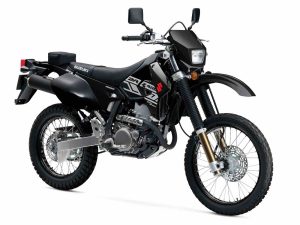 The dual sport looks like a dirt bike and is laid out similarly but is designed to be ridden – legally as well as functionally – on the street while still being capable of going off-road. It has more ground clearance and suspension travel. A high-mount front fender, to allow for the latter and to keep dirt from getting trapped between the fender and the tire. Those tires will be “knobbies” – though the tread is not usually as aggressive as a dirt bike tire, so the bike can be ridden on the street without rapidly wearing out a tire not meant for asphalt.

It will also have turn signal indicators, a brake light and a headlight – everything legally required to be DOT street legal, so you can get a license plate for it and so on. 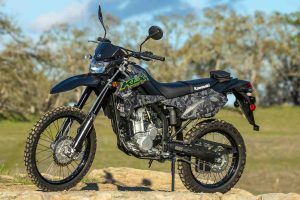 This type of bike – examples include  Yamaha XT250, the Suzuki DR series and the Kawasaki KL/KLR/KLX series – has a number of advantages that go beyond cutting your gas bill by two-thirds or even more (some bikes in this class are capable of averaging close to 100 MPG).

One of the biggest is that they are perfect first bikes for the person who has never owned a motorcycle but wants to.

Because they are perfect bikes to learn on.

First, because they won’t get hurt if you drop them. Which you probably will, if you’re just learning. Like dirt bikes, they are designed to be dropped – and picked up. They are also designed to be ridden on dirt – and grass – where you can practice without worrying much about dropping it. And if you do – which you will – it will be on soft rather than hard ground. Mud or grass stains on your pants is better than road rash on your legs.

Being light, they are easy to handle. Literally. You can move them around much more easily than a bike that weighs two or three times as much. Once you gain confidence riding, you will come to appreciate how “flickable” a lightweight dual-sport is; how you can ride one almost anywhere a bicycle can be ridden.

Another plus is you won’t quickly outgrow the bike – though you may well decide to buy a bigger/second bike that’s better suited to long highway riding and passenger-carrying. But even a 250 cc dual sport has plenty of power for commuting and city-suburban riding, with enough power to be capable of short hops on the highway, if you need to be able to do that every now and then.

Storage bags can be easily added, to increase the bike’s capacity to carry cargo – such as groceries. 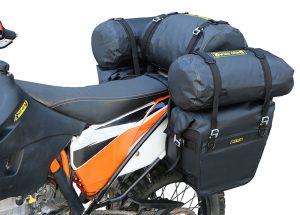 There is also an additional financial plus in that dual sports will usually save you money on insurance, which can be high on bikes – especially big heavy ones and “sport” bikes. It is quite possible your cost to insure a 250-650 cc dual sport will be half what you’re paying to “cover” your car. And it will cost you almost nothing to maintain the bike, which requires almost no maintenance except for oil changes and chain cleaning/adjustment. Tires wear out faster, but are much cheaper, too.

The best part of all may be that if you do decide to go up to a bigger bike – or decide that having a bike isn’t for you – it won’t have cost you much at all to dip your proverbial toe. Because bikes (especially these days) hold their value almost as if they were made of gold. Sometimes, they gain value. I stupidly sold my last dual sport – a Kawasaki KL250 – about a year before the “pandemic” began – for $1,500. This was what I’d paid for it about seven years prior. That same bike, today, sells for about twice that.

Probably because it cuts whoever owns it now’s gas bill by two-thirds and he’s having a ball riding it – and would never think of selling it.