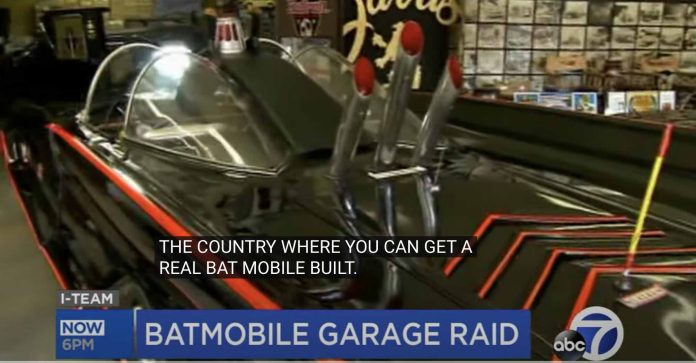 In the old Batman TV series, Commissioner Gordon would light up the Bat-Signal to summon Batman. In San Mateo County, CA, a rich guy summoned Armed Government Workers to signal the owner of an Indiana custom car shop that builds Batmobile replicas not to cross rich guys who have it in their power to sic Armed Government Workers on anyone who incurs their displeasure.

The rich guy who had ordered a Batmobile replica from the Indiana shop apparently failed to make one of the payments due and the shop was unable to reach him for more than eight months, to sort out the discrepancy – and for that reason, his place in line was given to another customer, who would get his replica ahead of the rich guy. The rich guy became irate when the shop owner told him why he’d lost his place in line and rather than settle the matter in the usual manner, he signaled his old friend, Carlos Bolanos – who just happens to be the head of a gang styled the San Mateo County Sheriff’s Department.

Bolanos gathered up a crew of AGWs – including a “lieutenant” and a “sergeant,” two military “ranks” that AGWs, who are civilians, often award themselves – and flew to Indiana, rented vehicles and paid a visit to the shop where the Batmobile replicas are made. They kicked the employees off the premises, turned away deliver drivers, manacled the owner and hauled him to jail – eventually leveling a number of trumped-up “felony” charges, including obtaining money by false pretenses and diversion of construction funds.

They also had the shop owner’s bank account frozen.

“I was treated as though I was a criminal,” the Batmobile-maker told local media. “They were there to intimidate me.”

They were also some 2,000 miles out of their jurisdiction – but that’s no problem when there’s a point to be made. All taxpayer-financed, too – to the tune of more than $10,000 in airfare, rental vehicles, hotels and food.

The incident is being investigated but no one in the Bolanos Crew has been arrested for this serial criminality, which is far more egregious than the run-of-the-mill extortion/strong-arm/intimidation tactics often used by private gangs because this gang is a legal one. It wears the “colors” of the San Mateo Sheriff’s Office and is endowed with special privileges and given special treatment, including a deferential attitude toward its criminality. 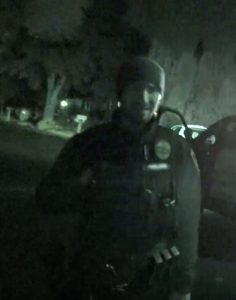 This is routine practice when it comes to the gangs in blue and black. They “speed” regularly; rarely “buckle-up” for “safety.” Attack people while screeching, “stop resisting!” and sometimes murder people in cold blood. Rarely, if ever, do they hear their fellow AGWs screaming at them to “get on the ground, now!” – as they often scream at others. They are infrequently charged with crimes in cases where anyone else would have been. And even when they are found guilty of something criminal and heinous, “qualified immunity” serves as their get-out-of-jail-free card.

Not infrequently, they retire before middle age on cushy pensions, also paid for by the taxpayers they “served.”

This won’t end until enough of us wake up to the reality that AGWs are not “police,” much less peace-keepers. They are the predatory praetorians of the police state, who serve themselves – and their friends.

As the owner of the Batmobile replica shop just found out – the hard way.