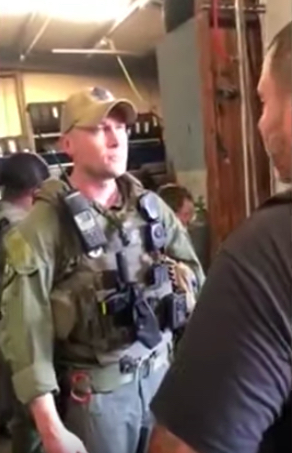 Here’s some video of armed government workers watching video of their beat-downs and enjoying it. A man is shown being tackled and then pummeled by AGWs, who repeatedly hit him in the head while he’s laying on the ground and no longer a “threat” to their “safety.”

The AGWs then pay a menacing visit – in full Tacticool kit – to a tire shop where a “civilian”  takes issue with their sadistic actions and gloating over it.

“You think it’s funny,” the man says to one of several AGWs who saunter into the shop. This one looks like some kind of sonderkommando – and likely imagines himself to be one.

“So that’s the rules?  You can punch a guy three times while he’s on the ground with people on his back?”

The SS Sturmbahnfuhrer – or whatever he is – gets all puffed up at this insolence. He assumes various threatening poses and babbles on about the rightness of his Hut! Hut! Hutting techniques

The man – clearly sickened – tells the AGWs to leave his shop, which they eventually do.

Probably, they’ll be back.

The frightening thing is these goons seem to really not get why “civilians” generally despise them.