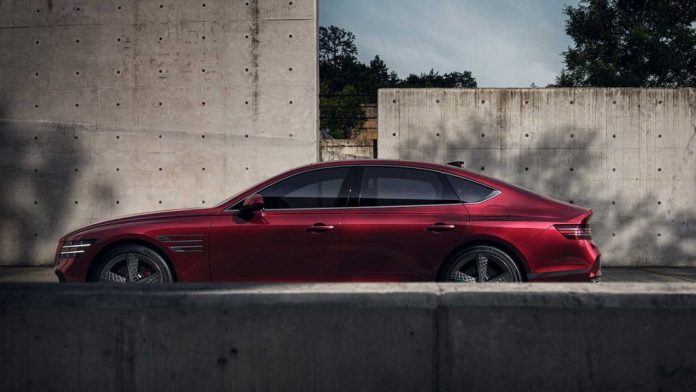 What works well once often works well, again. Even if it’s not you who’s doing it, this time around.

Back then, Toyota management figured that selling a less expensive, better-equipped Mercedes/BMW rival would be a great way to sell more Toyotas. But not as Toyotas. Thus, Lexus – which became the luxury division of Toyota. It worked very well. Lexus went on to outsell Mercedes – and other established luxury car brands –  and is now among the most established of luxury car brands.

Enter Genesis – Hyundai’s recently launched luxury division – which aims to become the same, on the strength of models like the G80.

The G80 is a mid-sized, rear-drive (AWD optional) luxury-sport sedan similar in general layout and characteristics to the established players in the segment, including the BMW 5 Series and Mercedes E-Class. Interestingly, Lexus no longer offers a player in this class, having retired the GS 350 sedan – leaving the smaller (compact-sized) IS Series and the front-wheel-drive (and Toyota Camry-Avalon- related) ES350 to bridge the gap.

Prices begin at $48,250 for the 2.5T trim, which comes standard with a 300 horsepower 2.5 liter turbocharged four cylinder engine driving the rear wheels; AWD is available optionally – bumping up the MSRP to $51,400.

The 3.5T Sport trim comes with a turbocharged 3.5 liter V6 and standard AWD – plus the 21 speaker Lexicon premium audio system that’s available optionally in the 2.5T trim. This version of the G80 stickers for $63,700. 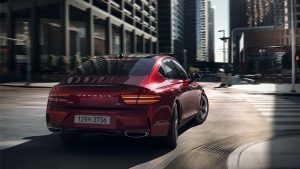 The AWD system that was previously optional with the 3.5T is now standard and a rear-wheel-steering system is available with the 3.5T, as part of the Prestige package. This system makes the G80 easier to steer into tight curbside parking spots, among other things. This package also includes real carbon fiber interior trim, sport-tuned stability control, a fully digital/LCD main gauge cluster, a heads-up display (HUD) and a 20 inch wheel/tire package.

Larger (and much stronger) standard engine than comes standard in rivals such as the BMW 5 Series sedan and Mercedes E350 sedan – for much less money.

Optional V6 is stronger than the BMW’s and Benz’s available sixes.

More backseat legroom than you’d get in the BMW 5 and Benz E.

V6 is no longer available (at lower cost) with rear-drive.

Massaging seats aren’t available (they are in the Benz). 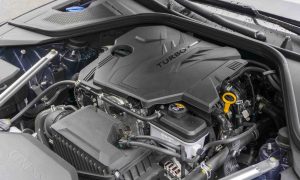 One of the way Lexus chewed away at BMW and Benz, back in the day, was by surpassing their reputation for being well-built and reliable. Today, those are givens – or rather, expected. It is why today’s “economy” cars are built to a standard higher than the luxury-car standards of the late 1980s, when Lexus made its debut.

So, how to impress luxury car buyers, today?

By offering them more engine for less money, for openers.

Even at the luxury car level, that isn’t loose change. 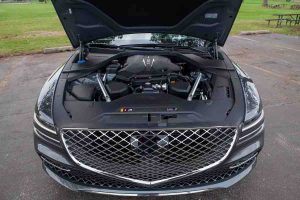 The G80’s optional engine is a turbocharged V6 that develops 375 horsepower and 391 ft.-lbs. of torque – as compared with the smaller (3.0 liter) in-line sixes that are available optionally in the BMW 5 and Benz E that make 335 and 362 horsepower, respectively.

Interestingly, the latter two are paired with a mild-hybrid (flywheel starter/generator) system – yet for all that technology there isn’t much difference insofar as mileage. The V6-powered G80 carries an EPA rating of 17 city, 26 highway; the BMW 540i – with the hybrid/six combo – rates 22 city, 29 highway. The also-hybridized Benz E450 comes in at 23 city, 30 highway.

But there may prove to be a big difference in long-term maintenance/repair costs – in favor of the G80. Which will never need to have an expensive lithium-ion battery pack or flywheel starter/generator system replaced. 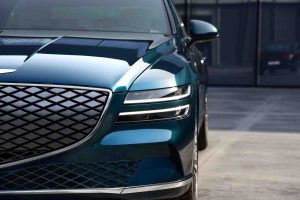 Acceleration with either engine is impressive.

The 2.5T takes about 5.7 seconds to get to 60 and the 3.5T cuts that down to 5 flat. We have become almost blase about such performance – which eclipses that once delivered by the snortiest V8 muscle cars of the ’60s and ’70s.

Both engines are paired with eight-speed automatic transmissions that feature driver-selectable settings that tailor shift firmness and timing to suit.

The 2.5 engine can be paired with either rear-drive (which is standard) or (if you want to pay extra) an all-wheel-drive system. Previously, you could make the same selection with the V6 engine, which meant you didn’t have to pay extra for AWD if you didn’t want AWD (but wanted the V6). Now, if you want the V6, you must pay extra for the AWD – which you may not want.

But, the AWD-equipped 3.5T is also exclusively available with a rear-wheel-steering system that wasn’t previously offered with either engine. It automatically alters rear-wheel toe-in so as to decrease the amount of turning the driver has to do to slide in and out of tight parking spots. 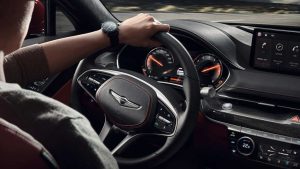 The G80’s V6 – though not a V8 – produces the same (or more) torque of a V8 and almost immediately. The peak output of 391 ft.-lbs. of torque is reached at 1,300 RPM, which effectively means immediately, since the engine idles not much faster than that. This  delivers the feeling – and the fact – of instantly effortless acceleration.

But it’s the standard 2.5 four that really sells the G.

When you spend close to $50k for a luxury-sport sedan, you not unreasonably expect it to have an engine appropriately sized – and powerful. The 2.0 liter fours in rivals are the same-size as the engines in many cars that aren’t luxury cars. They’re not much more powerful, either. 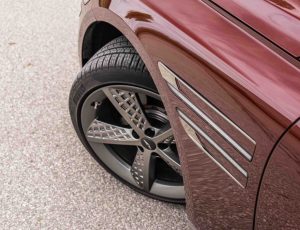 In some cases, they are much less so.

The G80 2.5T’s specs make you feel much better about spending just over $48k – especially given how little just over $54k gets you at a BMW or Benz store these days.

It’s also a good deal – literally – if you’d rather not have all-wheel-drive.

There are at least two good reasons for not wanting it. The first being that rear-drive is a more fun drive. All-wheel-drive takes away some of that for the sake of traction and while traction isn’t a bad thing, it’s also a less interesting thing. You floor the accelerator and the car accelerates. Not much to do other than keep your foot down and watch the needle rise. In a powerful rear-drive car, there is that smile-cracking little let ‘er rip that happens when you floor it when the light turns green. The rear tires wiggle a little as they break traction, then settle down as they regain it. Using your right foot to modulate it.

This is – that word, again – fun. Something lost when everything is under too much control. One wonders why none of the luxury-sport brands that sell AWD luxury-sport sedans have though to add an Off switch, to let the driver engage in some sportier driving when the urge arises and the situation’s appropriate. 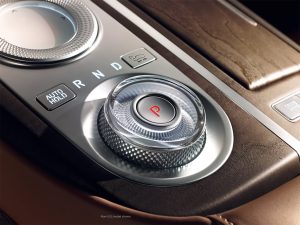 But at least as regards the G, you don’t have to console yourself with a weak engine that can’t spin the rear tires.

Unfortunately, the stronger engine that could really spin the tires – last year – doesn’t, anymore. Probably most of the clientele won’t miss the fun that’s gone. But – in this writer’s opinion – leaving the rear-drive/V6 combo on the table would have served as an ongoing flip-the-birdie to the kinds of people who wouldn’t understand f-u-n if someone tried to explain it to them. 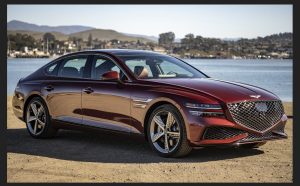 On the more for less money front, the G80 is a slightly larger, slightly roomier car than its main rivals from BMW and Mercedes. It is 196.7 inches long vs. 195.8 inches for the BMW 5 and 194.2 for the Benz E. These are incremental differences, of course – and not apparent to the eye. But you’ll be able to tell the difference in backseat legroom as soon as you sit down back there – especially if you are a taller person and an extra inch or nearly two is the difference between your knees rubbing up against the backs of the front seats or not.

The G’s back seats offer 38.7 inches of backseat legroom vs. 36.5 inches in the back of the BMW 5; the Benz E sedan’s back seats are slightly tighter – just 36.2 inches of legroom. 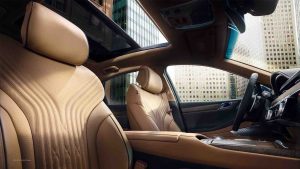 On the other hand, the G has the smallest trunk of the bunch – just 13.1 cubic feet vs. the BMW’s very generous (almost full-sized) 18.7 cubic foot trunk and this weakness is made worse by the fact that the G’s rear seatbacks cannot be folded forward.

That bit aside, the G is better-equipped as-it-sits than its pricier rivals. That Lexus formula, again. You don’t pay extra to get a power-adjustable steering column, a very good 12 speaker audio system or a 14.5 inch LCD touchscreen (the BMW 5 and Benz E both come standard with smaller 12.3 inch secondary screens). And you don’t have to go up to the top-of-the-line 3.5T to get the available 21 speaker Lexicon audio system, three zone climate control, soft close doors or a Digital Key that lets you unlock or lock your car remotely, via your smartphone.

The 3.5T is more than just an engine upgrade, too. 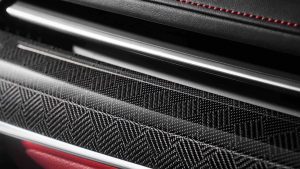 This version of the G comes with upgraded brakes, a 19-inch wheel/tire package (18s are standard on the 2.5T) plus an adaptive suspension, power rear sunshade and the excellent 21 speaker Lexicon audio system. This version of the G is also eligible for the Prestige package that centers around the rear-wheel steering system described earlier – a feature not offered by BMW or Benz – plus an upgrade to 20 inch wheels, upgraded leather upholstery, microfiber suede headliner and not-cheesy-looking (because it’s real) carbon fiber dash/door panel trim.

There are two things about the G that take a little getting used to – and one of them’s unique to the G.

That thing being the G’s reverse-direction tachometer. 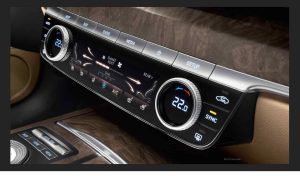 These measurers of engine speed (RPM) traditionally read from left to right, usually the needle swinging in the same directional arc as the speedometer needle. In the G, the tach needle swings backward.

Zero RPM is on the right side of the tach. The redline arcs leftward. It looks a little funky at first – and it might be a functional issue in a car with a manual transmission, in which keeping track of the tach is important. But in an automatic-equipped car, it’s not as much – even if you’re using the F1-style paddle shifters on the steering column to change gears manually – because the computer won’t let you inadvertently over-rev the engine.

The other thing is a common thing – in new cars generally and luxury-brand cars specifically. The control interfaces for operating the audio and climate control systems and many secondary functions are smartphone-like tap/swipe – and scroll. In the G’s case, using a combination mouse wheel on the center console or just by tapping/swiping the 14.3 inch LCD touchscreen. It takes a little while to learn the system – just as it takes longer to learn how to use a smartphone than a push-button wall phone. 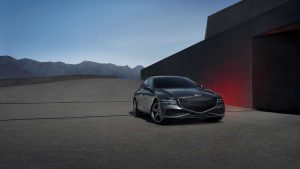 The G’s controls, once learned, are easier to use than some of the others because they’re not as sensitive to touch. A firmer touch is needed – but this helps avoid the common (and frustrating) problem of “touching over” the function you wanted and inadvertently activating one you did not want.

Just as Toyota did back in the ’80s with Lexus, so has Hyundai done – again – with Genesis.