Even though Teslas actually do.

No gun ever killed anyone. It took a person to do that. Speed never did, either. Rather, it was the impact with the deceased that did, caused by the loss-of-control of the vehicle – which can and does happen at any speed.

But Teslas actually do kill people. Two of them, just recently. In just one month. The first on July 7. The second a couple of weeks later, on the 24th. Both were motorcyclists. Each was struck from behind by a marauding Tesla driven by itself. Its driver asleep at the wheel – because that’s what Tesla’s “self-driving” technology encourages them to do. If you can’t fall asleep at the wheel in a “self-driving” car, why bother with a “self-driving car”? That would be like buying a boat that’s not safe to float.

Well, the two bikers are now asleep, too. Permanently.

If Teslas were guns, there would be calls to ban them. And these calls would be justified, since – unlike guns – Teslas not only have killed but will kill, again. How many is the only debatable point.

It is an inevitability of the technology – and the psychology. 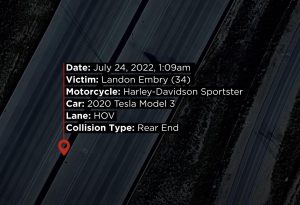 The technology is fallible, first of all. Teslas use cameras to “see” the road ahead and programming to interpret what they see. The car then “auto-pilots” accordingly. But the cameras sometimes don’t see things – like motorcycles (as well as other things) – and the programming doesn’t interpret the scene accurately. When that happens, the car “auto-pilots” itself into things, such as motorcycles – and other things that happen to be in its path.

Of course, human eyes – and “programming” – are fallible, too. But humans have two things “self-driving” technology lacks. One is judgment – as opposed to programming. The difference is important. Programming is nothing more than a limited set of parameters built into a system. When programming encounters a scenario it wasn’t programmed to deal with – or which flummoxes its programming – you get what happened to the two now-dead motorcyclists. 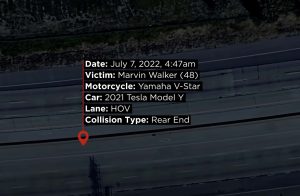 Judgment, on the other hand, is essentially limitless. There is interpretive intelligence behind a pair of human eyes. The capacity to not merely see what’s ahead but to adjust to what’s ahead – to new variables – in a way that transcends mere programming.

The other is moral agency – i.e., personal responsibility for what they (us humans) do. Such as driving their cars into things – and other people. It operates as an incentive to humans – most of them – to avoid driving into things (and other humans).

But Teslas facilitate the evaporation-dissipation of moral agency. It is the whole point of this “self-driving” business. Which is to not be responsible for driving the car. Tesla plays on this desire by styling its technology as “auto-pilot.” It is not styled “pilot-assistance” – or some such (as many other car manufacturers do style their systems). The appeal – as regards Teslas – is not having to “pilot” (that is, drive) the car. To be able to go to sleep behind the wheel – which numerous Tesla “pilots” have been video-recorded doing. At the very least, to be able to not have to watch the road as a driver would.

Of course, Tesla (and other manufacturers) legalese their way around this liability problem by advising “pilots” to always be “ready to intervene.” But this is deliberately fatuous, for the reasons already elaborated. Either the car “self drives” – or you are responsible driving it.

Tesla puts the “pilot” in the lose-lose position of all-but-telling them that the car “self drives” and then absolving itself of legal liability when its cars “self-drive” themselves into things – and people, like the two now-dead motorcyclists.

“All you will need to do is get in and tell your car where to go. If you don’t say anything, your car will look at your calendar and take you there as the assumed destination. Your Tesla will figure out the optimal route, navigating urban streets, complex intersections and freeways.”

Interestingly, “self-driving” technology could be safer – i.e., less likely to “pilot” itself into things. The problem is that such technology – LIDAR rather than cameras – is expensive. And Tesla’s “self-driving” EeeeeeeeeeVeeeeees are already very expensive. The Model 3 which killed one of the bikers is a $50,000 car already. EeeeeeeeeVeeeee or not, there is an inherently limited market for such cars, because there are only so many people who can afford to buy a $50,000 car. It’s why there are only so many BMW 5-Series and Mercedes E-Class cars on the road. And even fewer BMW 7-Series and Mercedes S-Class cars on the road. 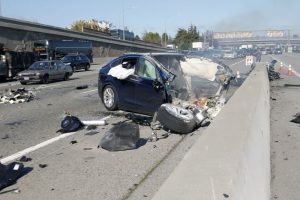 But Tesla wants to sell as many EeeeeeeeVeeeees as possible, so it cuts costs where possible. As by using a camera-based rather than LIDAR-based system. And – very interestingly – getting rid of the radar sensors it used to use as part of its “self-driving” technology. These were capable of detecting objects in the vehicle’s path – and slowing (or stopping) the car, so as to avoid “self-driving” into them. But the problem with radar is that it cannot distinguish between something that warrants slowing or stopping – such as an object in the road – and something adjacent to or above the road, such as an overpass.

Result? With the “pilot” asleep at the wheel, the car decides to slow – or stop – for no good reason, waking up the driver and possibly causing the pilot of the car behind the “self-driving” (and suddenly braking) Tesla to drive into the Tesla.

So, radar had to go. And LIDAR never went.

This speaks to Tesla’s motives- which are to sell cars and make as much money doing so as possible.

No matter how many things – and people – “self-driving” Teslas run into.