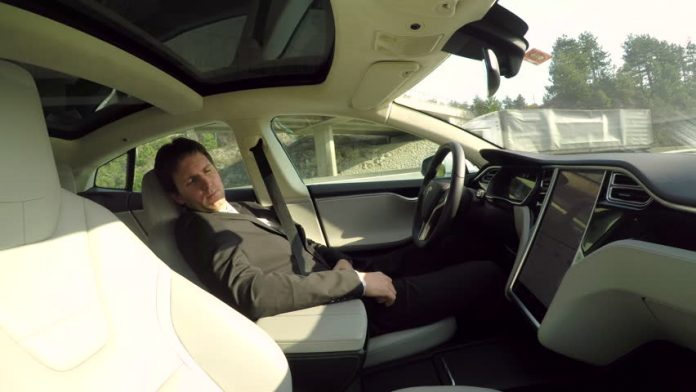 EeeeeeVeeees – especially Teslas – are very quick. But the experience is detached and anodyne. It quickly gets old. Or rather, nothing particularly exciting.

The best parallel example I can summon is the experience of riding the high-speed elevators at the ex-WTC towers in NYC, which I did a number of times before the Towers were dropped.

At first – if you’ve never been in a high-speed elevator before – Wow! They jump 10 floors almost as fast as I just typed this sentence. But the next day? The initial excitement is less. It wanes with each ride. By the end of the week it’s nothing special anymore. It’s just an elevator. Push the button, there you are. Forgotten as soon as the doors close behind you.

EeeeeeeVeeees are a lot like elevators. Both make very little noise and both are powered by electricity. They perform the task of moving you with alacrity – and very little else. Up and down. Whoop-dee-do. Th experience doesn’t vary much and that’s just what you’d expect because, after all, they are all essentially the same. Because how would you make an elevator – or an EeeeeeeVeeee – different? Electricity varies in power, voltage and amps. Some electric motors are larger and stronger than others. Some batteries are larger and higher capacity.

Some elevators go up 100 floors faster than some go up 10.

Now, my ancient Trans-Am is nowhere near as quick as a new Tesla Plaid. It gets to 60 in maybe six seconds or so vs. less than half that.

But every time I fire up the 455, the whole car shakes, the scoop does its nervous dance and you can see the air door on the scoop edging open under the strain of the vacuum pull. When you floor it and the secondaries flop open, it sounds like Hell developed a sinkhole and it’s going to suck down the entire atmosphere. It does not get to 60 in 2.9 seconds, like a Tesla Plaid, in part because it spends so much time spinning its rear tires, leaving greasy black stripes all over the road and clouds of acrid smoke in its wake.

The Tesla “hooks up” much better because it is all-wheel-drive, which prevents its tires from spinning. There are no greasy stripes or clouds of smoke – and the Tesla’s driver doesn’t need to work to keep the car straight by countersteering and feathering the throttle. Instead he just pushes a button – as in an elevator – and before you know it, he’s reached the 110th floor.

It is something anyone can do – which quickly detracts from the Wow! factor of doing it. Keeping the Trans-Am straight is neither easy nor assured. The thing is dangerous – in the wrong hands – and therein lies a great deal of the appeal. There was a time when fast cars were not for squids – a motorcycle term for riders who can’t, really. They are the ones you see riding fast sport bikes fast – in a straight line. Come the curves, you see them slow down. 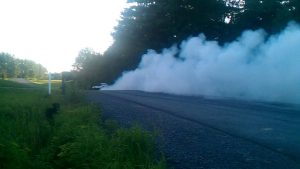 There was a time when fast bikes were also dangerous – in the straights – in the wrong hands. It kept the squids away from bikes like the Kaw H2 750 of the ’70s, which were very dangerous in the hands of squids. They had kick-start and oil-injection you had to remember to keep topped off else the rabid weed-whacker two-stroke triple would lock up on you at 130 and that would quickly end your ride – and possibly you.

No such worries on an electric motorcycle – which of course is no such thing in the first place. Such a thing is a scooter, no matter what it is trying to look like. A two-wheeled elevator.

Just push the button and go.

Back to the Trans-Am. Just trundling along, there is a comforting bass rumble you feel in your bones. Idling at a stop light, rumpety-rump. The sound amplified by the echo of the walls of the drive-thru, as opposed to an amplifier piping ersatz sounds through the speakers.

No EeeeeeeeeeeVeeeeeeee is capable of producing these sounds – or feelings. It is why I have no more feelings for EeeeeeeeeeVeeeees than I have for elevators – and cannot understand why anyone would.