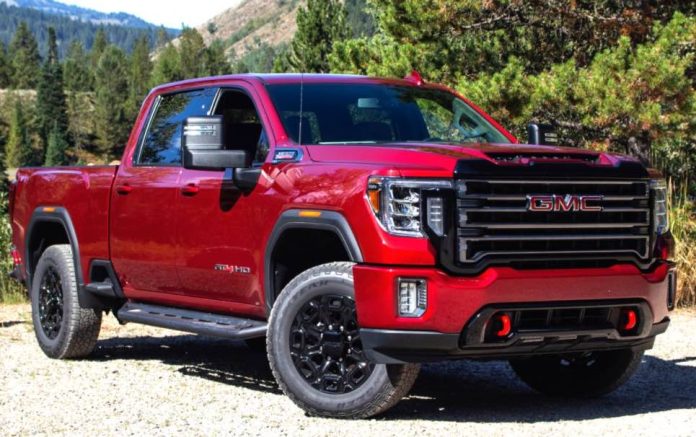 Big trucks are bigly popular – probably because big cars are pretty much gone. Even the biggest ones – which are all high-dollar luxury cars now, models like the Mercedes S-Class and BMW 7, only seat five and have small trunks relative to their size.

No one makes the six-passenger full-size sedans Americans used to take for granted that also had room in their trunks for six peoples’ things and – if there wasn’t enough room for that – could also pull it behind them, as those six-passenger sedans were built on truck-type frames and strong enough to pull a trailer. 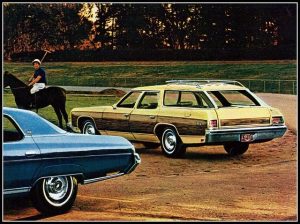 Today, you need a truck do that.

Some – like the GMC Sierra – are still available in a work truck configuration, too.

The GMC Sierra 1500 is essentially a Chevy Silverado 1500 with some styling, trim – and pricing differences. It’s a half-ton truck available in regular cab, double cab and crew cab configurations, with beds lengths varying from  a short (5.5 foot) bed to a long (8.1 foot) bed. It’s also available with four different engines, ranging from a turbocharged 2.7 liter four cylinder that makes as much power (and torque) as the truck V8s of not-that-long ago to a 6.2 liter V8 that makes as much power as Ferrari V12 made not all that long ago. There’s also an available diesel inline six that splits the difference between pulling power and fuel economy.

Prices start at $36,600 for the base Pro trim with a regular cab (two doors, seats three across) with an eight foot bed, 2WD and the 2.7 liter four.

Interestingly, the nearly identical (mechanically/functionally) Chevy Silverado starts out slightly more expensive, at $37,395 for the Work Truck equivalent of the base Pro trim Sierra. It’s interesting, because GMC is usually considered to be a cut-above bread-and-butter Chevy. 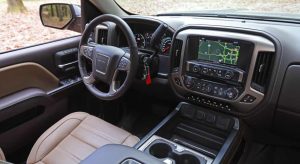 On the other hand, Chevy doesn’t offer a Silevrado as opulently trimmed – or priced – as the top-of-the-line Sierra Denali Ultimate, which comes with a three-year subscription to GM’s SuperCruise self-driving system and a 15-inch, hexagonal Heads Up Display (HUD). It stickers for $82,295 .

The most expensive version of the Silverado – the ZR2 Crew Cab – stickers for a more appropriately Chevy $71,895.

It’s a very nice truck, too. Just not quite as nice as its Sierra Sibling. 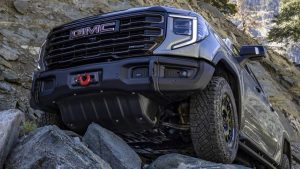 Not just the increasingly common crew/double cab (and short bed) only.

Regular cab is restricted to base Pro trim. Trucks used to be available with a wide range of engine options, because trucks are used for a wider variety of things than cars.

This GMC still does.

But this four cylinder engine makes as much horsepower and – far more importantly, for truck purposes – torque as most of the V8s that were available in half-ton trucks from the ’70s through the early 2000s. 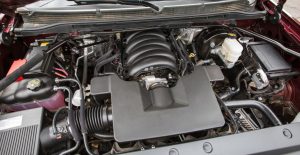 Now, you may not want to pull that much with such a small engine – in such a big truck – even if the numbers are right. Because that small engine is under a lot of pressure, literally – being heavily turbocharged.

But the numbers are stout, nonetheless. 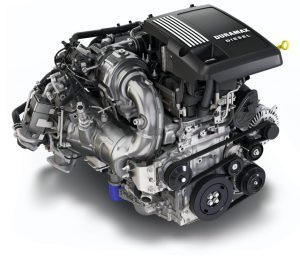 If you want a more traditional engine, you can select a 5.3 liter V8 engine – at no additional cost. GMC lets you pick either engine as the standard engine in the lower trim Sierras. This engine makes more horsepower (355) and a bit less torque (383 ft.-lbs.). But it’s under less pressure – because it isn’t turbocharged. Tow capacity kicks up to 10,900 lbs. with this engine.

The next two engines offer the same things – and different things. 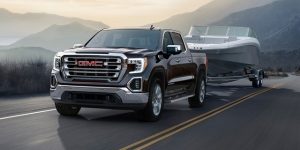 It is also the preferable option for saving a bit on fuel because it uses less. Which means you go can go farther, and not just on a gallon of it. EPA says 23 city, 30 highway, which is excellent mileage for a half-ton truck that weighs close to three tons (for the crew cab version). With 24 gallons on board (the 28 gallon tank is only available with the regular cab – and the regular can isn’t available with the diesel) you can drive this rig an astounding 700-plus highway miles before needing to stop for more.

That’s about three times as far, by the way, as an electric half-ton such as Ford’s F-150 can travel before it needs to stop – and that’s not pulling a trailer.

The diesel’s not a dog, either. It’s close behind, running the same run in 6.5 seconds.

Because big trucks have replaced big cars, they are as or even more comfortable to drive than the big cars they have replaced. Even – as in the case of the Sierra – with a solid axle/leaf spring suspension system. Which just happens to be exactly the kind of suspension system that was typically used out back in the full-size American sedans and wagons that are no longer available.

But in this case, modulated by adjustable shocks.

These big trucks also have something else in common with the big American cars of the past: Full perimeter steel frames onto which the body is bolted, which is how you get the “big car” ride – by isolating the suspension (and engine) from the body (and from the road) via rubber biscuits in between the frame and the body (and the road). 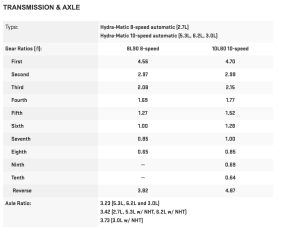 That plus a long wheelbase – and lots of weight.

The result is exactly what a lot of people want, as evidence by lots of them buying of it. As contrasted with their not-buying of the small, front-wheel-drive and unibody cars the government wants people to want.

There are some important differences, though, between these big trucks and the big cars they’ve replaced. The Sierra is very tall, even without the two inch lift that you get when you buy the off-road AT4X version. You climb up rather than in – and once in, you may find that you feel small because this truck is really tall. And wide. So are the other half-tons, which are dimensionally comparable to the three-quarter-tons of as recently as ten years ago. 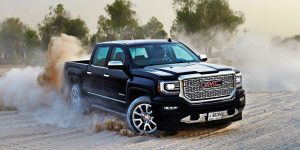 This bigness is belied by the ease with which the truck can be driven, though.

The power steering makes all that weight feel light and – so long as your respectful of the rig’s length and width – can be driven easily by almost anyone. This was absolutely not true of trucks back when they weren’t made for people who drove cars. You may not have had to deal with as much length – or width – but you did have to deal with heavy steering (and a heavy clutch) and not much comfort for your backside, either.

The main driving issue is in this truck is outward visibility – especially to the rear and sides – which is limited by the height of the hood and the bedwalls and the abbreviated height of the side and rear glass. This is a point of major difference between the trucks of the past – which typically had very squared-off cabs with lots glass all around them – and the trucks of the now, which almost look like they’re “chopped,” an old hot-rodding term for lowering the roofline by cutting it down a couple inches relative to the body.

GMC does offer one of the most comprehensive all-around camera systems to aid visibility during low speed maneuvering but once on the road, but you’ll still want to use your eyes – and make sure.

A metric of the changing role of trucks can be seen in the changing of forms. Half-ton trucks used to almost always come standard in regular cab form – with an eight-foot bed. Now, a number of trucks in the segment (e.g., the Nissan Titan, the Toyota Tundra and even the Ram 1500) no longer offer a regular cab – and some of them don’t offer an eight foot bed, either. Probably because they are only offered in double and crew cab configurations – and if you added an eight foot bed to that, you’d end up with something considerably longer than the longest American land yacht cars of the ’70s.

The fact that so many new half-tons don’t come in regular cab/eight-foot-be-configuration tells you they’re used more as cars than for work.

But this GMC still comes standard with a regular cab – and it’s available with an eight foot bed. However, the regular cab configuration is only available with the base Pro trim – and that trim isn’t offered with either the turbodiesel six or the 6.2 gas V8. 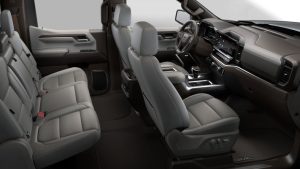 On the other hand, even the base Pro trim comes standard with AC, power windows and locks, remote keyless entry and heated outside mirrors. That’s more in the way of standard amenities than used to be available in the most luxurious big cars of the land yacht era.

The new AEV Edition (for the AT4X) factory-equips the Sierra with most if not all the stuff you used to have to buy aftermarket and bolt-on afterwards. With a full factory warranty, too. 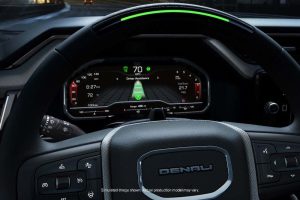 You can still get a three-across bench – and  column shifter, too. Or buckets – with a center console-mounted gear selector. Whichever you get, you will have so much room you probably won’t be able to use all of it.

Just like used to be the case when you could still buy a big American car.

GM (and GMC) still uses steel for most  body panels, which is good if you don’t like high repair costs – and high insurance costs. Aluminum being easier to bend and harder to fix once bent. 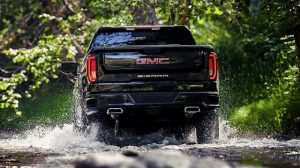 The Denali Ultimate trim comes with a version of the SuperCruise self-driving feature that GM first offered with some Cadillac models. It’s designed for “fully hands free” operation – but only on “select” highways (those being ones adequately mapped to work with the system). But given the fact that self-driving systems sometimes self-drive themselves into things, you might want to keep your hands on the wheel and your eyes on the road, regardless.

Drive this big truck and you’ll be reminded what it was like to drive big American cars, once.

And now you can, again.